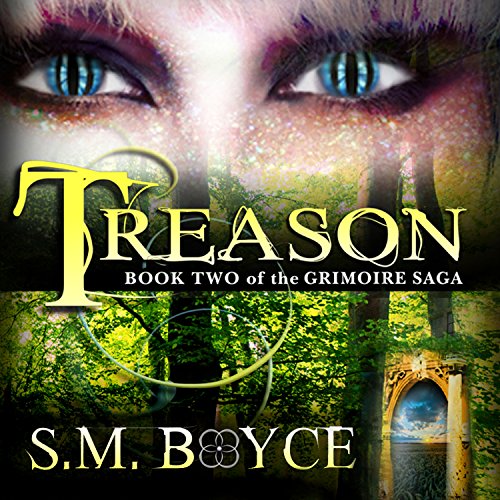 Kara Magari ignited a war when she stumbled into Ourea and found the Grimoire: a powerful artifact filled with secrets. To protect the one person she has left, she strikes a deal that compromises everything she believes in...and things don't go as planned.

Braeden Drakonin can no longer run from who - and what - he is. He has to face the facts. He's a prince. He's a murderer. He's a wanted man. And after a betrayal that leaves him heartbroken, he's out for blood.

To survive, both Kara and Braeden must become the evil each has grown to hate.

Would you listen to Treason again? Why?

I'm impressed that book 2 was even better than book 1! This is by far one of the best books I've read in years ( I am a prolific reader. ) I listened to most of it whilst driving, often parking outside my house then listening until the chapter ended as I just had to know what happened.
There's an amazing array of characters, all with distinct voices (in both senses), awe inspiring locations, heart breaking situations and constant twists and turns. I often held my breath, occasionally flinched and sometimes smiled with joy. Set in a time of war and upheaval, I became so immersed in the emotional journey that at times I cried too. A fascinating mix of creatures, races and customs adds to the excitement as well. What can I say? I loved it. I will definitely reread this series and I'm so glad that book 3 is waiting for me to begin.

What was one of the most memorable moments of Treason?

Ooh, hard to say. I guess the depths of the treachery, the scene between Aislynn and Kara in the cave with the table.

Which character – as performed by Kara Kovacich Stewart – was your favourite?

Could you be the next Vagabond?

Outstanding! You have to listen to this series.

What made the experience of listening to Treason the most enjoyable?

The story was quite an adventure. You never knew who you could trust and who would stab you in the back, definitely kept you guessing. The narrator had such a smooth and expressive voice. How she made all the different voices distinctive, was quite expressive.

What other book might you compare Treason to and why?

I would compare the Grimoire Saga with the Harry Potter series. So many different creatures and magic, with a young one being trained in all their power. With an evil force after him.

This was an excellent series, with so many twists and turns that kept you guessing until the end. The surprises were unending. With a great narrator and amazing story was really enjoyable to experience.

Can't wait for the next book.

This is a truly enjoyable story. Complex, yet easy to follow with rich characters. The voice narration is astounding with so many rich accents. Kudos to Kara Kovacich Stewart. Never have I enjoyed narration so much. I highly recommend this audio book.

I don’t think I’ve had as great of a reaction to any book as I have this one; well not since I read Lichgates. S.M. Boyce comes back with book two of the Grimoire saga, and comes back STRONG! I honestly didn’t think Lichgates could be topped on my all-time favorites list. Treason surpassed it with flying colors.

For those readers who have read Lichgates already, they know how talented Boyce is in creating the world of Ourea. For those who don’t know, let me tell you. Boyce’s world-building skills haven’t diminished since book one. They may even have gotten better. Ourea, all of its kingdoms, hidden nooks and crannies, the glimpses of the real world that the reader gets, they all show such beauty while having constant danger everywhere. Ourea is a dangerous place. It goes with the territory. Despite the danger it’s a place I’d love to visit if it were to be real.

What I also enjoyed were the new characters in Treason. All the old favorites from Lichgates are back as well, don’t worry about missing them. They come back even better this time! The complexities of all S.M.’s characters allow for plot twists, extensive and unfolding histories, hope and fear for the future. Each character has an agenda and each character influences others whether they know it or not.

It’s this complex world and character system that makes Treason, and The Grimoire Saga in general, what it really is. It’s an epic movie unfolding before the reader’s eyes. I don’t know if I was really reading the words on a page, as much as I was watching vivid images play in my head. I couldn’t not turn the page even when a chapter was over. I wanted to keep reading in order to find out what was in store for Kara, Braeden, and the rest of my favorite characters (especially the adorable fur-ball Flick).

I could go on for hours pointing out what I loved about this book. I also am confident in saying I have nothing negative to say…nothing at all…about this book. There are plot twists galore. There’s also one MAJOR twist that even after reading it a few times to make sure I read it correctly I still didn’t see coming. I can’t believe it really. It was so seamlessly and stealthily thrown in there, it was like “*POW* I’m a ninja.” If I had the space to do so, I would have been flipping and bouncing off the walls of my room. No lie.

In this second book, Kara has come to terms with the fact that she's the Vagabond and she's decided to jump into her task of uniting the people of Ourea wholeheartedly. Unfortunately, not everyone in Ourea is on board. Most people simply want to use Kara, and the betrayals in this book just keep coming. To make things more complicated, she's falling in love with Braeden, and these feeling can be used against her. Even the original Vagabond isn't above threatening Braeden and he does everything he can to keep Kara and Braeden apart. The stakes are way higher in this second installment of the series, and both Kara and Braeden are put through some pretty horrible things. The pacing is fantastic in this book, and I often found myself wanting to listen just a little bit extra so that I could find out what was going to happen next. I loved the characters in the first book, but Braeden captured my heart even more in this second installment. And then there's Kara - I love that every time I thought there was going to be a cliché plot point or Kara was going to agree to something way out of character, Boyce surprised me. Kara is intelligent and strong-willed, but that doesn't mean she never makes a mistake - she falls prey to trusting people occasionally who she shouldn't and she gave into demands once or twice - but it all felt very within her character. Toward the end of the book, there's a major twist that I didn't see coming at all - it completely changes a LOT of things! Loved this book - 5/5 Stars.

NARRATION: I thought that Kara Kovacich Stewart did a fantastic job with the narration of these books. I especially loved her accents for many of the Oureans.

Always a fan of S.M. Boyce

What made the experience of listening to Treason the most enjoyable?

Continuing on after Book 1 is more necessity than choice. You have to know more!

I enjoyed visiting with the Vagabond again.

The characters are rich and engaging. And Thier world is captivating. I can't wait to hear the next book. Loved it!

I still can't get enough of how Kara made different voices for everyone; it's EPIC. Ms. Boyce writing is amazing, it keeps you reading every page always wanting to know what will happen next. Fantastic work, and Kara, I love how you read the book and gave each person a voice.

I was given this book in exchange for an honest review.

I absolutely love this series, and the world that Boyce has created. I really enjoy following Kara in her journey, watching her grow and become the person that she is suppose to be to this new world. I found myself hoping and cheering her along on some of her adventures. My heart broke with hers in more then one part of the book. The last part of the book is filled with twists and turns I was not expecting. I can't wait to start the next one!!!

Who can you trust?

If you could sum up Treason in three words, what would they be?

The development of the characters

What about Kara Kovacich Stewart’s performance did you like?

Everything! Listening to this book with very long chapters made it more entertaining than reading it myself. Kara's voices, which were different for each character, really added to my enjoyment of the book. Awesome performance!

No...way too long with too much action to listen to all at once

Even Better than the first book

Kara and Braedan must face truths both won't like, the Vagabond and Grimoire will help with what they can but each must find their own way and the truth within themselves. They might find that to survive they must become the part of themselves they least want to be .

I wasn't sure how the last book could be topped , but this one picked up right where the last one left off and the action and suspense didn't waver. I went with the audiobook version narrated by Kara Kavocich Stewart who just brings Ourea and all of it's people to life. I am so thankful for awesome narrators like her for many different reasons but mostly for bringing great books to life for me on days I am not able to read. Her talent makes those days much more tolerable