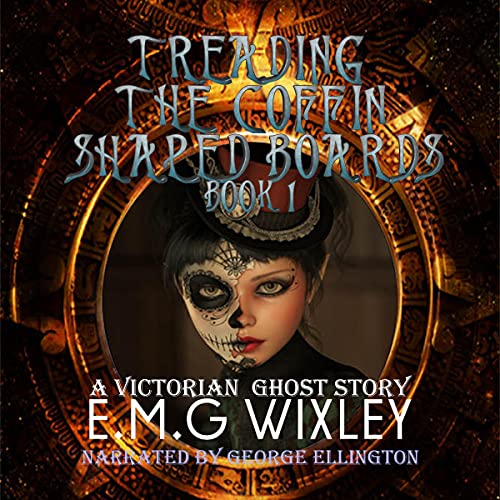 Mary is born into the chilling darkness of the workhouse. To cope with the harsh and hostile environment, she develops inexplicable abilities. At night laying in the coffin-like bed, it is normal for her to hear the creaking floorboards, to see sinister spirits hiding in the shadows, vengeful phantoms, and demons.

As a young adult Mary once again finds herself down on her luck and is forced to reenter this most dreaded of places, but this time she is accompanied by her two children. The master of the workhouse believing her to be a bad influence and fearing she would stoke instability among the other inmates quickly throws her back out onto the desolate and dangerous Victorian streets without her babies.

During a chance encounter, she meets Charles, owner of the Royal and manager of Drury Lane theater. She embarks on a new career "treading the boards" and is embroiled in the underbelly of Victorian life where debauchery and decadence run rife. Throughout her trials and many performances, she seeks to reunite with her lost boys. The stage is set for vengeful spirits and for a macabre chill to blow through theater-land.

What listeners say about Treading the Coffin-Shaped Boards

I openly admit that I was given an ACX promo code for this title. I’ve been using Audible for only a few months and in that time I’ve been broadening my own horizons with promotional titles so that i can build my library and enjoy listens that I would otherwise have missed out on. With that in mind, I always try to be fair with my reviews. I had no idea what to expect with this book and yet I was blown away.

It’s not a genre I’d typically have chosen myself. However, the scenes painted by the author are so vivid. The characters are so..:human. They’re flawed but you become connected to them and their stories. It’s believable in the context of the story. This isn’t just a simple story, it’s one of depth and emotion. It brings up morals and ultimately what it means to be a good person. The story reflects on us as people. No matter how far in the past it’s set, many of the themes are still relevant today.

I loved this authors style. The way several stories can be told at once while maintaining a natural rhythm. The progression isn’t forced or drawn out, it all has its pace and it keeps true to the unfolding events. The dialogue. The intimacy. The character building. It all comes together to present us with a truly gripping story.

As a listener, I loved the journey I was taken on. I find it very easy to just consume the words spoken and go with the story rather than try to predict events, and the fact that this book was so well written, it really accommodated my style of listening.

The narration for this book… I’ve been trying to put into words what I thought. It’s often hard to do because everybody brings something unique to a book. Some voices sound great but don’t suit the story being read, others are hard to imagine without that voice. I got into audiobooks with Harry Potter. I listened to the Stephen Fry version and as soon as I heard the first words, I was immediately captivated by the power of audiobooks. In many ways it can be like chasing the dragon - to find someone who puts on such a performance that immediately captivates you. For me, Stephen Fry is the gold standard of narrators who perform. There’s very few people who have such a distinct and unique voice to tell stories, who have their personality shine through the words they speak. When you find those people, it stirs something in you as the listener. You almost close out the world and submit yourself to go on a voyage with a stranger.

George was absolutely fantastic! I cannot state that enough. He *performed* the book with such a wide arsenal of accents…of talent. With such emphasis on the spoken word, this is someone who understands how to portray the true power of words. Perhaps the magic lies in the Scottish accent - as Scot myself, this is the first book I’ve listened to with a distinctly Scottish accent but it’s so easy on the ears, it’s an almost magical experience that had me hooked in the opening lines. George performs a book with a passion reminiscent of Stephen Fry and tells a story that grips you like listening to Billy Connolly. I had no idea what to expect with this listen but I’m truly…at a loss for the right words. I was blown away.

The pairing of E.M.G. Wixley and George Ellington truly is a perfect match and I cannot recommend this title enough. This is my first listen of this combination and I will be enjoying other work by these two. This is what it feels like to find a real hidden gem.

I really liked this Victorian paranormal book which had a different twist to the story that I found very interesting. There were a couple of plot holes which I wish the author would have tackled, but over all a very enjoyable book. I look forward to how the story develops in book 2. The narrator did a great job here.

I was given this book for free of my own choosing and voluntarily left this review.

loved this audio book can't wait for book 2
Mary is born into the chilling darkness of the workhouse.

an awesome audiobook! What

It would be so hard to give you a brief summary of this book let me just say Marie is in the Work house with her two sons who live in a dormitory away from her. She has special powers that allow her to astral project to build them and check on the welfare. While doing this a power not her own forces her to the back door of the private homes of the couple who run the Work house and she hears them discussing her and how she hast to go, because they deem her ungodly and lazy. So the next day when they kick her out without her two boys George and Johnny she is devastated. It will be in this despair that changes her circumstances. I know this is vague, But there is so much to the story and it's expertly told. I have read both books in the series and can honestly say it is my favorite Siri‘s by EM G Wixly so far. She is one of those authors who I’ve read every book by her and can’t wait for more. They have many different characters in this book and they are all voiced by George Ellington a true professional when it comes to narration and one of my absolute favorites. I love that you can tell the difference between the characters as it gives each one a voice of their own. I was so surprised when I found out he was doing the narration for this book because what are the chanceS my favorite author and favorite narrator would come together to make a book I think the chances are almost impossible. I feel so lucky it happened though. This is a great book a ghost story of epic proportion’s told what an authentic voice and a plausible plot. Cant Think of another book I love as much as this one. I can’t wait for the second one to come out. It is definitely a book I highly recommend.

Great start to a series!

Treading the Coffin-Shaped Boards is a delightful mix of ghost story and love story! The author has written the characters so the they feel real and you find yourself wrapped up in the story. Warning though it does end in a cliff hanger, so be prepared! I am anxiously waiting for the next book in this series.

I was given a copy of this audiobook in return for my unbiased review.

What a story!Mary is deemed an unfit mother while she is in the workhouse.She is tossed out and her children sent elsewhere.Mary has a talent for speaking to ghosts,so she can make money here and there.Her goal is always to find her children.I loved it! George Ellington was a terrific narrator.I was given this free review copy audiobook at my request and have voluntarily left this review.'

I did enjoy listening to this dark, suspenseful paranormal book. Really enjoyed the main character of Mary and her abilities with ghosts and her love of children. She really endures so much but her choice of men was bad. Recommend if you enjoy dark paranormal thrillers with ghosts. I was given this free review copy audiobook at my request and have voluntarily left this review. Thank you