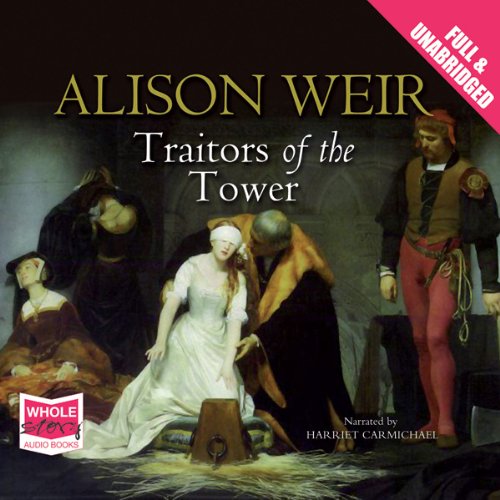 Traitors of the Tower

By: Alison Weir
Narrated by: Harriet Carmichael
Try for £0.00

More than 400 years ago, seven people - five of them women - were beheaded in the Tower of London. Three had been queens of England. The others were found guilty of treason. Why were such important people put to death? Alison Weir's gripping book tells their stories: from the former friend betrayed by a man set on being king, to the young girl killed after just nine days on the throne. Alison Weir is a wonderful storyteller. Through her vivid writing, history comes alive.

What listeners say about Traitors of the Tower

Remember once a year in school you got to choose a 'project' and you wrote as much as you could on the subject without really giving each subject too much depth? Well that's how I found this book, although the price and running time had alerted me to the fact it was never going to be any more then a quick skim over each subject, it just lacked any real detail and unfortunately the narrator did not help reading in that 'standing in front of the class' way. Disappointed, but glad it was cheap!

A little disappointed with this one. I have read a lot of A W books that are an abundance of info on Tudor life, there is no one better. However: this one seems a little pointless to me as it says nothing new nor much about any of the characters, a bit of waste of money, credit and time. The narrator is not up to much and all is a little flat, or headless.

Nice introduction but you will want more

This short book will give you bitesize introduction to some very complex stories of historical "traitors" and is perfect for those who are new to the subject.

The voice performance wasn't my favourite. The narrator had a very "matter of fact" way of speaking - not much feeling or performance and it leaves the book feeling a little dry.

However, overall I would recommed this book to anyone who has a passion for history and wants to learn more. Alison Weir is a great writer and historian, and she has been able to break down these topics into small informative chunks in a very adept way. So while the voice performance lets the book down a bit, its a short book so you won't have to worry about it too much.

This is REALLY by Alison Weir?

What a load of drivel. Wrong facts, wrong people, wrong places. If this was truly written by Alison Weir, she needs a trip back to school for basic history lessons. I never thought I'd be saying that. The only positive thing I can say about this book is that it ends.

good but some facts were wrong

the story of perkin warbeck was hime pretending to be richard of york not edward earl of warwick.

Alison demonstrates her superb ability to make history interesting and includes anecdotes which other historians leave out, however it is a shame that the narration spoils the overall effect. It is a personal viewpoint but I do not like my historical audio books to be read in a sing-sonsy voice as though I were a four year old. Other Alison Weir audio books are narrated by a male who pitches it just right and so I was disappointed with this reading but will remain a loyal Alison Weir fan.