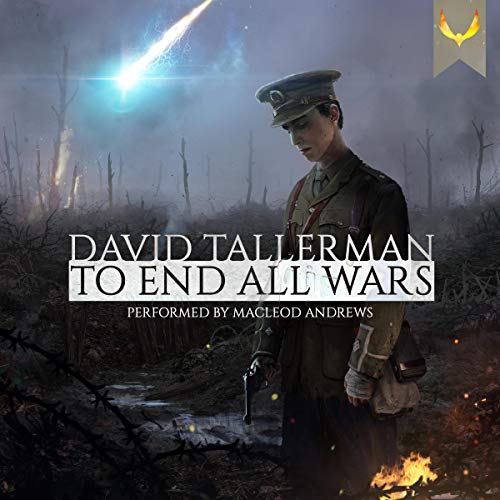 To End All Wars

By: David Tallerman
Narrated by: MacLeod Andrews
Try for £0.00

The horrors of the trenches unveil an extraordinary mystery....

It's 1916, in the heart of World War I. The eve of the Battle of the Somme. During a perilous night mission in No Man's Land, Lieutenant Rafael Forrester witnesses a peculiar light followed by a vast explosion.

Wounded and delirious, Forrester finds himself shipped home to England, to the country house hospital of Sherston, where he learns he may face a court-martial for the deaths of the men under his command. Yet in the strange environs of Sherston, where any act of rebellion seems impossible, Forrester soon comes to fear for more than his freedom: haunted by hallucinatory dreams of his time at the front, he suspects he may be losing his mind.

Little does he realize that Sherston conceals its own incredible secrets. Ones with the potential to change not only the course of the war, but all of human history.

Don't miss this remarkable story of conflict, military service, discovery, and of a force beyond human comprehension. To End All Wars is an otherworldly thriller set during WWI. A mixture between 1917, Shutter Island, Close Encounters of the Third Kind, and Arrival.

What listeners say about To End All Wars

I wasn't sure really if I would like this book. I normally avoid books that cover events during WWI as they seriously wind me up. How the soldiers sent to the front line were little more than points on a map to the people that sent them, often into a massive cannon fodder grinder. The horror of war isn't glossed over in this book and it does cover some of the horrors that the soldiers were subjected to, such as gas attacks etc.

The book I wouldn't regard as speedy in how it builds the background, But I'd rather a careful story that I can enjoy and builds the environment without loosing the "reader". This is a very thoughtful story and once it gets going it's very hard to put down.

The Narrator is one that I'd not listened to before, Very good job, clear and the accents were good. With good differentiation between characters.

I haven't come across anything quite like this, I enjoyed the initial first world war backdrop and the mysteries later on in the book. It all went very quickly but I enjoyed it overall, plenty of moments to make you think about certain things. Definitely worth the listen.

Enjoyed the story, had a decent period feel with the language used. An interesting tale of one man's struggle with the effects of war, and the early twentieth century attitude towards his sexuality. Thrown into this mix is a sci fi alien encounter.
The delivery of the take by the narrator is good even with his unusual pronunciation.
Well worth a listen.

David Tallerman has created a unique, thought provoking, historical science fiction thriller. This well crafted, suspenseful sci-fi mystery is revealed in a manner to keep the reader/listener engaged. The story deviated from the path that I had anticipated which was a pleasant surprise. MacLeod Andrews did a good job narrating this book with an English accent. I was provided a free review copy of this audio book and am voluntarily leaving this review.

Clearly this author has written many books. He is no amateur. I found myself captivated from start to end and was satisfied with the end. It’s literary sci-fi at its finest set in an era I’d love to have seen.

Heart-wrenching, powerful, beautifully written prose performed by one of the best in the business. I didn’t know MacLeod could pull off such a strong accented performance! Bravo!

This is one of the most beautifully written books in this genre I have heard/read in years. The twists are interesting and I enjoyed just about every aspect of the story. The only thing I was not a fan of, interestingly was the epilogue. I felt it was not necessary and ended up bluntly hammering home all of the subtly messages that had so wonderfully been crafted through the main story. However in all this was a great book.

Intriguing story but too drawn out

I bought this title as a sci-fi first contact novel, but it took almost halfway through before there was more than just vague hinting at an alien presence. Sometimes there could be 10 minutes of explaining how the main character made a decision whether to enter a cave, and it drove me crazy. I dozed off through some of it and don’t think I missed anything of consequence. That said, I’m glad I listened to it, a very unique story.

I really enjoyed this book. I hope this guy publishes a few more novels soon.

Could not sympathise with protagonist

Could not sympathise with the 'so called' protagonist, I thought he was a whinger and totally unsympathetic to the cause of the allies.

The beginning was pretty catching and mysterious, but after that it got too boring and repetitive. I never seemed to reach a peak or hieght of suspense. It simply fizzled out in my opinion.

To End All Wars by David Tallerman, is the story about the world war one lieutenant Rafael Forrester, who observes a strange signal flare in the sky followed by a large explosion, while working his way through a war torn battlefield. His first thoughts are that this must be a new axis weapon, and doesn’t give it much more thought. Due to his injuries that resulted from the explosion, he is fortunate enough to be transported away quickly to a hospital facility, where he is allowed to recuperate and tend his wounds among other soldiers. But as time progresses, things turn out not be as they seem at the hospital, and Forrester starts having weird dreams, as if something is affecting his memories. Also, the leader of the facility is a bit too cooperative in giving Forrester what he wants, and over time Forrester finds the need to try and get away, because something is not as it should be.

I found To End All Wars to be a captivating and very well written story, which was a joy to listen to. The main character was very believable and I really got the impression that I was following the story of a WW1 soldier, who was caught in a web of lies. There wasn’t a huge cast of side characters, and those that were there, were well developed too.
The story did drag on somewhat in sections (Mostly beginning and end), and the surrounding mystery wasn’t too deep plotwise, so I do think the book could have been edited to be somewhat shorter without loosing too much of the intrigue. Fortunately, the lovely prose made it quite bearable, and I didn’t mind it too much as a result, but I want to mention it in case anyone is looking for something where the plot progresses quickly.

I listened to the audiobook narrated by Macleod Andrews, who did a wonderful job of it. Clear narration, great alternative character voices, with a very nice and fitting accent to back it up with. I very much enjoyed his narration.

Overall, a very enjoyable story which I would recommend for anyone who enjoys a good story in a historic background, with some supernatural mystery mixed in.

I received this audiobook for free in return for a review. I have no affiliation with the author/narrator, the publisher, or their pets (Although I am sure the latter are quite nice!).