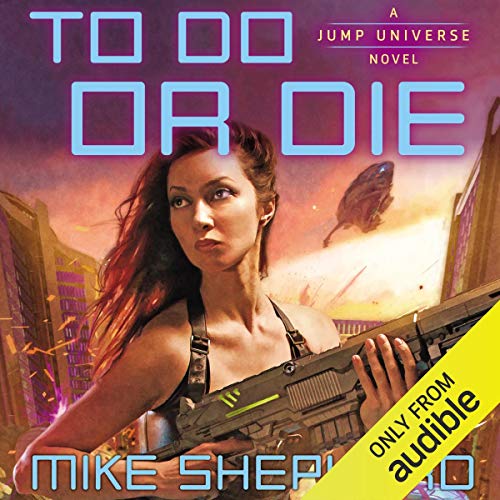 To Do or Die

By: Mike Shepherd
Narrated by: Michael McConnahie
Try for £0.00

From the national best-selling author of the Kris Longknife series comes an all-new Jump Universe novel. Retired Colonel Ray Longknife and Marine Captain Terrence “Trouble” Tordon come to Savannah via different routes, but what they find is the same. One bully strongman is intent on keeping power no matter what the new rules are for peace. He’s got the population cowered by thugs, and tanks at the ready. He expects to win the coming elections handily. He doesn’t expect trouble. Or, in this case, Mrs. Trouble - aka Ruth Tordon - a Marine wife on a mission to find the drug lords that almost killed her and her husband and put them out of business - and she’s not about to be stopped by some barely trained roughnecks. Abandoned by their strongman and desperate in defeat, the heavy armor get ready to roll into town over anybody in their way. But Ray Longknife, Trouble and Ruth are standing in their way…and nothing is going to flatten them.

What listeners say about To Do or Die

To do or die

Would you consider the audio edition of To Do or Die to be better than the print version?

Kindal have yet to get this so the audio is my only encounter... (thumbs twiddling)

"Trouble" and his lady wife. Great characters learning this Married stuff under the most trying of circumstances.

He follows the ques in the book - growls, squeeks... Rarelly voices lines with the wrong character (a favorate hate of mine). Nice listening.

Yes, Longknife and Trouble save another world... but we do get Black Mountain and the Ladies From Hell! The best sort of escape, not too sugary and plenty going on.

Another solid book in the series

Honestly i like that we are watching this verse come together. before they were all polished glass and rich. and that they had to work for it. allot of the tech from the Kris Longknife series is not there yet.