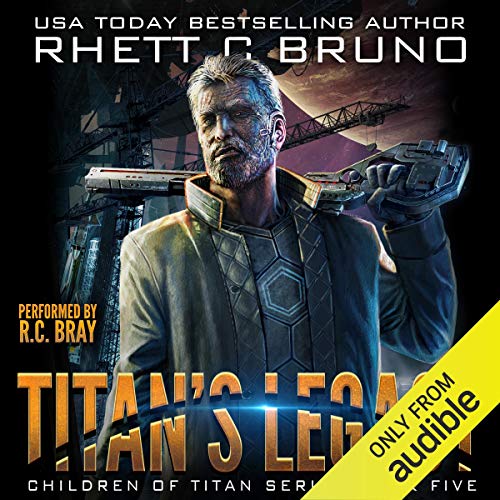 It's time for one last mission...

Ten years have passed since the end of the Titan Conflict. Now, the Titanborn stand on their own. And even though the war might be over, tensions between them and Earth have never been higher.

Malcolm Graves has spent the last decade living on Titan, the last place he'd ever expected to retire. But he'd made a vow to his daughter: protect her son Alann until his dying breath.

But when an old rival on Earth makes a threat against Alann's claim as heir to the throne of Titan, it's time to dust off the old pulse pistol and silence him. One problem. After he sets off to return to Earth for one last time, he awakens from cryo to find a stowaway. Desperate to see the worlds beyond Titan after spending his young, privileged life sequestered there, Alann had snuck aboard.

Together, they'll have to survive the perils of Earth as enemies old and new gun for the future King of Titan. One wrong move, and it'll be war again. A war that, this time, humanity may not survive.

Join ex-collector Malcolm Graves on one last mission in the fifth and final installment of the Children of Titan Series. To protect his grandson, there is nothing he won't do.

What listeners say about Titan's Legacy

Good end to the saga

A good end to the story, r c bray excellent as always! Read it off your like the others.

Just another shortlist story within a story. still a good read and will continue saga

Loved the end to this series - although I'd be lying if I said I didn't wish there was another book. Maybe an arc...? Great writing, and as always phenomenal narration by RC Bray.

I wasn't expecting another installment to this series but I'm glad the writer pulled it off, I was great and the one liners kill me.

I need another! Its so good! Every book sucks me right in and it's like I'm there.

Great way to wrap up Malcolm 's story, however something tells me it really isn't over yet?
You decide.

2nd only to Book 1 in the series

Best books since the first in the series. RC Bray is near perfect as always. Leaves room for more but if not it provides a good ending for the series.

What. a. finish. What a series. Well done sir. Loved how much the characters grow on you. Couldn't have "put it down" if I'd wanted to. I strongly recommend the whole series.

I think this was the best of the series yet. Ready for the next one!

Hoo raa for the ending

Kinda sad that it ends the way it does, thought there would be something more along the lines of typical "saved the hero" kinda fanfare but then again, I suppose real life doesn't work that way. i've thoroughly enjoyed the whole series.

This was an very satisfying and thrilling conclusion to an already awesome series. With the few curve balls that Bruno throws at you, you will be engrossed in this book and not want to stop listening. I loved every second of it.