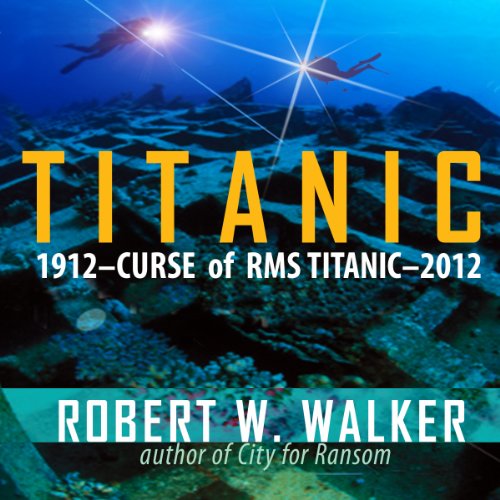 This historical generational horror/suspense/science fiction audiobook defies genre classification as it has intrigue and terror. It is a Centenary retelling of the Titanic story to destroy all the false legends surrounding Titanic. "From a master of terror and suspense," according to Clive Cussler, author of Raise the Titanic, herein lies a compelling reason that forces Captain Edward J. Smith to scuttle his own ship - RMS Titanic. What dark secret prompts such an action on the part of a veteran, retiring captain on a ship's maiden voyage? What prompts men 100 years later to pillage the wreck of the Titanic? What secret lies buried within the lost ship - a secret that could destroy all life as we know it? The answers are unveiled in April 1912 and in April 2012, and there will be blood….

What listeners say about Titanic 2012

Way too much music and sound effects

Would you try another book written by Robert W. Walker or narrated by Lee Alan?

Would you ever listen to anything by Robert W. Walker again?

Who might you have cast as narrator instead of Lee Alan?

All as characters not very good

Maybe enjoyable if it was not for the endless music and seagull sounds effects. Accents are just really bad.

What a difference an exceptional narrator makes!

What does Lee Alan bring to the story that you wouldn’t experience if you just read the book?

There is reading a book. There is reading a book well. And then there is a level above both of those. This level involves actually "presenting" a book... with interpretation, with emotion, with drama. And not with just the human voice. This level also involves actual production quality with music and sound effects. You can listen to just the words of a book. But you can also actually experience a book with a reading, an interpretation, and a presentation "par excellence". This is exactly what you will get with the work of Lee Alan. Presentation... total experience... this is the gift of the best audio book narrator I have ever heard. This is the gift of narrator Lee Alan!
Donald Schuster 05-13-14

The narration is cringe-worthy at best

What disappointed you about Titanic 2012?

The narration made it almost impossible to listen to. Excruciating is the most appropriate word I can use.

Has Titanic 2012 turned you off from other books in this genre?

I would never purchase anything from this narrator EVER!

No, even considering it makes my ears hurt.

The narrator-I know he's not a character but that's who I'd cut anyway.

what are they thinking with this performance?

What disappointed you about Titanic 2012?

The narrator is dreadful. He reads the story like a man doing a horrible impression of one of those actors on tv who advertise class action lawsuit services by pretending to be a tough, cut-throat attorney. But that is NOT the worst part. I will not be able to comment fairly on the story itself, because I will not be able to make it past the second 20 minutes. This audiobook has a non-stop, mind-boggling, pointless , shrill instrumental music soundtrack that is so distractingly loud, pointless, with no relationship to the story, that you will want to throw your device out the window. This is by far the worst production I have ever bought. I want my money back so I can just buy the book and read it.

Would you recommend Titanic 2012 to your friends? Why or why not?

NOT the audiobook. Buy the book if the story interests you.

Different narrator, NO soundtrack of any kind. Ever. Never. Ugh. Headache inducing to the ultimate.

The director or producer or whoever was the mastermind behind demolishing what might be a good book.

Could have done without the sound effects

If they had forgone the sound effects and had a different narrator. This was the only book I really could not listen to.

What was most disappointing about Robert W. Walker’s story?

The plot was sophmoric

Found his narration irritating. I usually can lose myself in any audiobook and overlook disapointment in a narrator