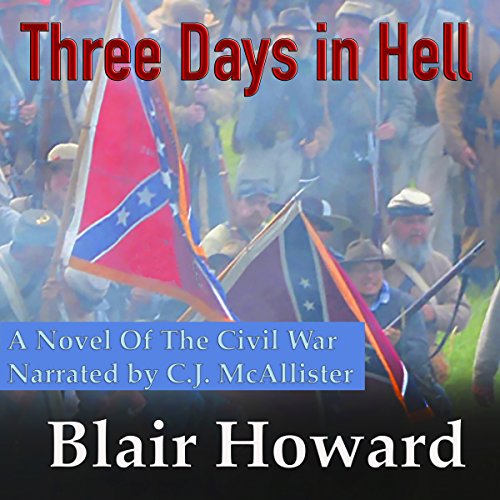 For more than two months, Union General William Rosecrans and his Army of the Cumberland pursued General Braxton Bragg's Confederate Army of Tennessee from Murfreesboro to Chattanooga. Finally, on September 18, 1863, on the banks of a small river in Northwest Georgia, the two great armies came face to face, and so began three days of hell, including the two bloodiest days of our nation's Civil War.

Three Days in Hell is a novel, a work of fiction, based on actual historical events. The characters, with one exception, were all real people. The words they speak throughout the story are the author's; the deeds they did, their success and failures, are their own. Drawing on many years of meticulous research, Blair Howard dramatizes one man's contribution to the stunning Confederate victory at Chickamauga. Brigadier General Bushrod R. Johnson was the key player for the army in gray.

This is the story of Confederate General Johnson's three days at Chickamauga, and his grand and glorious charge of more than a mile that smashed through the enemy lines and resulted in a resounding victory for the Confederate cause and an ignominious defeat for General Rosecrans. Even Johnson's enemies praised what he did that day. Some compared it to Pickett's Charge at Gettysburg, but where Pickett failed, Johnson succeeded.

Three Days in Hell, action-packed from start to finish, is the story of Confederate General Bushrod Johnson's Chickamauga as told through the eyes and words of one of his staff officers, Major Chester Rigby. The author takes you onto the battlefield as no one has done before. He plunges you right into the center of the action, which doesn't let up until the very end. It's a story of heroism, desperate deeds, and death and destruction on a scale the likes of which had never been seen before.

What listeners say about Three Days in Hell

This is like living history. It takes you right back to the Civil War at the side of a Confederate soldier. It is written as a first person narrative, which in this case was very effective. It really brings to life the essence of the time and what it must have felt like to live through what these men did.

The narration is spot on. Too many voice actors make the mistake of equating a nineteenth century southern accent with the typical one of today, but not Mr. McAllister. He nailed it.

I received this book for free at my request and have voluntarily left this review.

As one reads this, you wonder did the author live during that time.His detail account of this battle is so very real, the smells, the sounds, and what the men were going thru, and most were so very young. It is very accurate of what that time in history was. To read will leave you shaken of what they went thru. Given ARC audio for my voluntary review and my honest opinion

liked the book easy to follow and listen to, would buy other books from this auther

This book is about the cival war. It shows you what those guys really went through. Its full of battles . There is no way we can imagine what they went through. There is a lot of books about the war but this one ranks in the best of the genre. C.J. Macalister brings the book to life. He does an excellent job. It takes a special voice to make this type of book interesting. I received a copy of this book from audiobooks unleashed but that has no influence on my review.

Great audiobook of the Battle Of Chickamauga during the American Civil War. It kept my attention all the way to the end, amazing audio delivery, loved it. Will be reading/listening again, every chapter was received amazingly. I would recommend you give it a listen.

Three days and hell by Blair Howard tells the story of the battle of Chickamauga. This battle is one that may not be as well known to some as are other battles of the American Civil War. Mr. Howard does a good job of blending true accounts with his own character. The author has many other titles also related to the Civil War, a list of which may be heard at the end of the story. He also gives his own explanations so be sure to stay tuned for those. If you are interested in history or in puzzling out the details as to which parts of historical fiction are true and which are not, a game you can play as you read in this genre, and one that can help younger readers of about middle or high school age to develop an ere for picking up on and remembering context and plot clues as well as plot sequencing events, then this book might be a good starting place for you. Historical fiction such as is found in this book may be a more pleasurable way to learn your American Civil War history if you're a student. But students fair warning do your research before you use any answers in class not all of this will be real it's up to you to find out what is good hunting. For those of you who are not students but just like to read Mr. Howard provides a good story told in a first-person account I would recommend this one if you're looking for a short trip back in time. For any American Civil War enthusiasts you'll like this book too. Happy reading everyone. PS. LOL no I'm not a teacher.

What Happened at Chickamauga

This book is not so much a novel as an eye witness account of the Civil War battle of Chickamauga recounted by a young officer who fought on the Confederate side. It is raw, graphic and hard-hitting; a reminder that war is never pretty and the Civil War was bloody and horrible regardless whether you are the winner or the loser. Set in the frame work of his recollections, years after the battle, it is well read by C.J. McAllister who lends the officer a realism that often puts you in the middle of the battle, as horror struck at the blood and the noise as those young soldiers must have been.
Well written, well read, well worth your time.

Another well-written blend of fact & fiction

Three Days in Hell: A Novel of the American Civil War (Blair Howard's Civil War/Western Series Book 4). A well-written historical blend of fact and fiction. If you have any interest at all in the Civil War and its battles, this is a book that should be on your TBR list! C.J. McAllister's narration adds to the book's enjoyment. (RIP Marley January 20, 2014 - July 24, 2018).