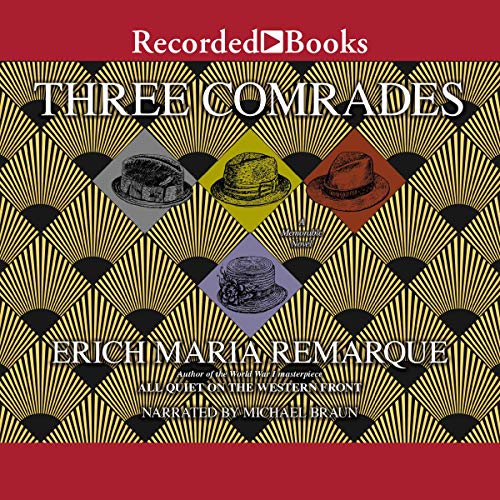 From the acclaimed author of All Quiet on the Western Front comes Three Comrades, a harrowing novel that follows a group of friends as they cope with upheaval in Germany between World Wars I and II.

The year is 1928. On the outskirts of a large German city, three young men are earning a thin and precarious living. Fully armed young storm troopers swagger in the streets. Restlessness, poverty, and violence are everywhere. For these three, friendship is the only refuge from the chaos around them. Then the youngest of them falls in love and brings into the group a young woman who will become a comrade as well, as they are all tested in ways they can have never imagined.

Written with the same overwhelming simplicity and directness that made All Quiet on the Western Front a classic, Three Comrades portrays the greatness of the human spirit, manifested through characters who must find the inner resources to live in a world they did not make, but must endure.

"The world has a great writer in Erich Maria Remarque. He is a craftsman of unquestionably first rank, a man who can bend language to his will. Whether he writes of men or of inanimate nature, his touch is sensitive, firm, and sure." (The New York Times Book Review)

What listeners say about Three Comrades

One of the author's finest novels

Remarque was a master of irony and compassion in all of his novels. A recent biography is entitled "The Last Romantic".

Love and friendship in a dying world.

Central Europe just seems to have gathered its breath to live again when clouds of barbarity, incompetence and pusillanimity clash drowning it in a rain of ruined lives,culture, hope and common decency that once thrived there. Focusing how these thematic interplay shows itself in a small German city, one sees how such changes affect the lives of four people, a young beautiful consumptive woman and three friends.

Their display of love and friendship in a disintergrating world is contrasted with the surging barbarity which kills one of the friends, and world's age-old indifference to everything except gold (with a few rainbow-bright exceptions that makes one not ashamed to be human). Meanwhile, T.B of the girl Patricia Hollmann gets worse and she has to go to a sanatorium in the mountains and her lover Robert and his remaining friend Otto are in desperate need of money to let the girl stay in the sanatorium. To raise money, Otto sells his racing car that he has practically rebuilt from a wreck and christened Karl, and it is more a friend than a piece of machinery. Indeed, it brought Robert and Patricia together in the first place.

Loss of Karl is soon followed by Patricia's death while Robert stays by her side; so the book ends a trifle abruptly leaving the reader to wonder what became of Otto and Robert, the remaining two of the four friends, young, decent Europeans in whose hearts once gleamed hopes of happiness.

Heartfelt narration of a masterpiece. Michael Brown has been faithful to Remarque’s characters, dialogues, descriptions - reality of an era. This book is a must read and a must listen.

This is no "All Quiet on the Western Front" or "The Road Back," with the Great War being at the forefront. "Three Comrades" is the story of three German friends, who survived WWI, and are living during the tumult that follows. But the war isn't mentioned often. Germany is in upheaval and the storm cloud that is Nazi Germany is not far in the horizon. The streets are violent and upheaval and death surround the friends on all sides. There's Robbie, Lenz, and Otto. Robbie falls in love with Pat. Pat is sick and dying. The others are fighting the emptiness that comes with living in a world where all seems that death is the only thing one has to anticipate.

One thing that can be confusing is the translation. And said of "I, said" that translation will come out as "Said, I." And this is repeated nearly hundreds of times in the book. It's rather bizarre. Too, as an American Christian, who has yet to know brutal fascism, it is hard to understand the emptiness that the characters feel. And the natural inclination toward despair. But as the fascist storm clouds gather on the horizon, I have no doubt it will be made clear soon. So though this is fiction, there are so many hints at brutal truths of life's hardships.

Michael Braun's performance is excellent. This isn't an easy book to narrate. It is very nuanced. I found that listening to it at a speed of 1.2 or 1.3 helped. All around, a great performance.