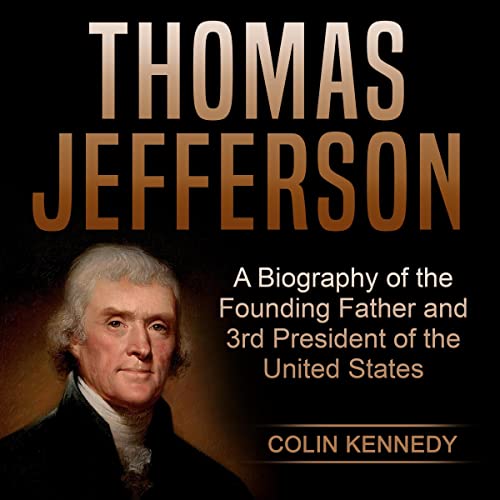 By: Colin Kennedy
Narrated by: Todd Belcher
Try for £0.00

Get one step closer to knowing Thomas Jefferson with a deep dive into his life as an American founding father.

As a child growing up on his family’s plantation, young Thomas Jefferson had to find ways to entertain himself. He would spend hours reading, studying, and observing the plantation that surrounded him.

He never expected that he would change the world one day.

These little things that he did would add up, and once he grew older, he became the man we know him as today. The main author of the Declaration of Independence, a founding father, and ultimately, the third president of the United States.

But, like every story, there are always two sides to history. There are some that described him as a “great man, but not a great American”, or on the other side of the coin, there were some that called him a hero!

What could have caused such a divided opinion on one man?

There is definitely more than meets the eye with Thomas Jefferson. His legacy will continue to live on as he goes down in history as the father of democracy, liberty, and as the spokesperson that worked with the people, for the people. This is a man that you can’t ignore as his name is sprawled across countless streets, cities, parks, and even monuments in tribute to all the things he had accomplished.

Discover more about Thomas Jefferson starting from when he was a child, up till the moments of his death, and the legacy that preceded him.

This is more than just a biography; it’s a story of revelation, war, struggle, freedom, and redemption.

Scroll up, click on “buy now”, and get your audiobook now!

What listeners say about Thomas Jefferson

I liked learning about Thomas Jefferson beyond his political career. The author does a good job of balancing details about his personal life and details about his presidencies so you get a full picture of who Jefferson really was. I enjoyed learning about his sometimes difficult family life and his controversial relationship with Sally Hemings—definitely learned some information about his romantic life I hadn’t heard before. This is a great book for history lovers or anyone who wants to learn about the complex life of the founding father Thomas Jefferson.