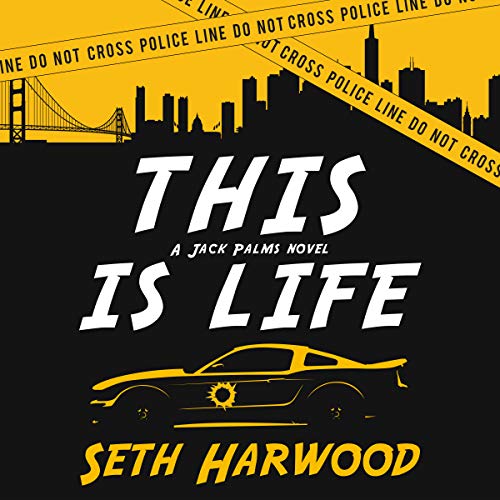 This Is Life: Or Jack Unravels a Crooked Cop Ring and Stops a Big-Gun Shooter

Jack Palms is more interested in tuning up his vintage Mustang than starring in action films these days. Along with his failed marriage and plenty of bad habits, Jack abandoned his acting career three years ago, and life’s just the way Jack wants it: boring.

But picking up where Jack Wakes Up left off, Jack now finds himself in the middle of a whodunit in the seedy red-light district of San Francisco’s North Beach. Young girls, shipped as merchandise from Balkan countries and sold to city heavyweights, are turning up dead, and no one knows why. And closer to home, a crooked cop steps out of Jack’s past and into his backyard, taking potshots from the bushes at midnight. Sergeant Mills Hopkins, SFPD, thinks someone big is responsible for the bodies and the bullet holes. And if Jack is going to find out who’s pulling the triggers, he’ll have to forget about the quiet life and act more like an action hero.

What listeners say about This Is Life: Or Jack Unravels a Crooked Cop Ring and Stops a Big-Gun Shooter

Absolutely fantastic second book in this series. It’s my second time around for these and they haven’t lost anything in the years since I first did them.

The characters are enthralling and very well defined. A truly enjoyable adventure. Kept me on the edge of my seat despite the fact Ive heard it before.

When's the next movie coming out, Jack?

He might have played the hard hitting, fast firing action hero in his one off movie success, Shake 'em Down, but in real life Jack Palms was more the flee from than the go to guy. Having essentially blown both his career and marriage in the excessive delights of Hollywood stardom, he'd finally kicked both drug habit and alcohol dependency rand eturned home to San Francisco after an exhilerating freedom of several biker weeks with his Czech friends, hoping that all would now be quiet. Not to be. Not only does he find a note in his kitchen from his police friend requesting he call on him - so the man had obviously been inside his house whilst be was away - but also that his bed, sheets anythingd pillows had been burned to a black char whilst he was gone. Later that night, someone tried to shoot him from his garden and he found all of his doors unlocked. Not the tranquil restart he'd envisiaged.
And it was going to get so very much worse.

This is a full on, action adventure detective story with very little time to draw breath. There is, however time for humour and the protagonists, wierd and wonderful as several of them are, are well characterized. The story is told entirely from Jack's perspective, the readers made privy to his musings, moans and guilts as well as following him through the tricky.minefield of his life. Which might not be a very long one, either, unless he can work out who to trust. Great snappy dialogue, well described fights and other encounters, and all felt very human, including the voicing of the very frequent and overused expletive 'F***k', though, goodness knows, it certainly seemed the most appropriate thing to say most of the time.

The story is narrated by the author, Seth Harwood, with a little help from friends who take a few of the character parts. This Audible is, according to the introduction, a s!ightly revised version of his serialized podcast, which explains the very occasional repetition of information already given. Mr.Harwood reads his story well, good pace to fit the text and a slightly downbeat tone which really suited his main character.. The added voices too, were exce!!ent, bringing a refreshing full cast feel to the production. There were a few editorial glitches, where the narrator stumbled over a word of two and corrected without removing the fault, but these were minor. And on at least one occasion, a whole paragraph was repeated. Nice brief bursts of music were occasionally inserted and, rather strange, the chapter numbers were given almost sarcastically enthusiastic rendering. But overall, this was a most enjoyable performance of a pretty good thriller.

My thanks to the rights holder who, at my request, freely gifted a complimentary copy of This is Life, via Audiobook Boom.It was fun, exciting and a really good unexpected read. I will certakn!y be looking out for more productions by Seth Harwood.

Really enjoyed listening to this audio book, though I've listened to the series a bit out of order. Full audio cast was extremely impressive. Highly recommend this high quality production.

I think that Jack constantly being asked when he is going to make another movie really was ironic as Jack’s story really plays out like a movie. Picture Michael Bay writing a crime noir story where good guys are loose cannons and the bad guys are crooked cops. Everything is quite unbelievable with the plot and although it is a bit over the top at times it was a fun ride. Even though this is a series it stands alone quite well.

The characters are all quite interesting and quite enjoyable, although don’t expect any great personal struggles or big character shifts. Jack is a man’s man with his classic Mustang, although I think my favorite character was Freeman. The bad guys are just as much fun as they are your typical Russian gangsters and some crooked cops.

The plot is fast paced and contains pretty much everything one would want from an action thriller like this. Very reminiscent of classic 80s and 90s detective whodunit style thrillers mixed with a lot of heavy hitting action. I’m not sure if this story is supposed to be taken seriously but I would say you shouldn’t and just enjoy the ride. Only complaint about the plot is that the setting isn’t as fleshed out as I would like but that isn’t the point of this story.

Much like most movies I don’t think they portrayed guns correctly. 50 caliber rifles aren’t that hard to get and are not that rare. Clip and magazine are not interchangeable, especially within the same sentence.

I found this to be a very good crime book. It felt like an old school type of book with all the hard core cop drama that kept my interest. The narration was good for this type of book. I was voluntarily provided this review copy audiobook at no charge by the author, publisher and/or narrator.

This Is Life was a good listen. It drew me in pretty fast and I had a hard time stopping it to go to bed. This is Jack Palms Crime, Book 2 and I was able to listen to it as a stand alone but now it made me want to hear book one. Jack is a well-rounded solid character who even with a bad habit or two is still quite likeable. The supporting character of Freeman was also excellent although a bit scary. I liked Jane too.

The setting in San Francisco was a good one and the story, location, and characters were all very cohesive. I like Seth Harwoods writing style, even the song he used. That was cleverly done.

The narration was very well done. The characters had distinct voices and personas but they weren't overkill. They were just right. The main ones being Jack and Freeman but there was also the character named Buddha plus I liked when Jane came in somewhere around halfway or more. All were really good.

Note: I also really like the cover art on this book.

This is the first book I have listen to by Seth Harwood and I very much enjoyed it. I like the way he brings the characters to life and the way he presents them, not as hero's but as people with character flaws. The story is engaging and keeps you entertained throughout the story. The main character, Jack, continues to find ways to get into trouble and he has to dig deep inside himself to find what he is willing to do or not do in order to get out of trouble.

Most authors don't usually narrate their own books but Harwood does a very good job in telling the story.

I enjoyed this book. The narration was good and kept you entertained. This author did a good job with the character builds and plot. This was my first book by this author but definitely will not be my last. In fact, I'm looking forward to reading the other books in this series. I was given this free review copy audiobook at my request and have voluntarily left this review.

So few novels are set in SF, I love when I come across them. This is a violent crime novel, with a lot of swearing, so it may not be for everyone. I found it gripping ~ I really enjoyed the story and characters.

Wow. That’s all I can say after getting into this thriller from Harwood, one of my favorite writers. I loved listening to the different voices from various actors. This one played out like a full-cast audio with different people doing the voices, bringing their own accents and intonations to the characters. Really deepened the experience of listening for me. Great stuff!

Loved the original podcast enough to pick up the book, and loved that enough to pick up the audiobook. The only thing missing was the feeling that I wasn't being told to get those earmuffs on those kids often enough, but that could be from originally listening to it weekly. Jack returns home from his road trip to find out that the city that seemed out to kill him in the first book hasn't forgotten about him. This book also introduces Jane Gannon, who'll get her own badass adventure in "In Broad Daylight." Alas, now I have to wait for Czechmate to come out in audiobook. Luckily, there's a Kindle version now, so I've got time to read it before once again listening to Palmsdaddimus Prime and his crew Shake 'Em Down a third time.

first heard the palms books when you did them on podcast. live you left on voice characters. keep up the work and cranking out those great novels.

I completely enjoyed this story. Great characters and the story was easy to follow. It is a story that you can just relax with and enjoy it without effort.
I was excited when I read that there were going to have different people doing the voices of the different characters. The voices weren’t great and it seemed the quality of the audio was not great. Sounds like they recorded it in someone’s basement on a Saturday afternoon.
I was given this free review copy audiobook at my request and have voluntarily left this review.