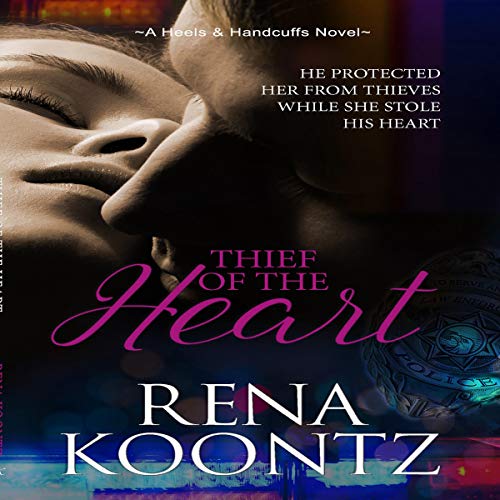 Thief of the Heart

From the moment he saw Jennifer Roberts, his instinct was to protect her. But she wanted nothing to do with him. In fact, the last thing Jennifer wanted to do that Saturday afternoon was call the police. She didn’t trust them. She’d fallen hard for a cop - the exact person every child is told to run to for safety - and he betrayed her and broke her heart. She wouldn’t make that mistake again. But she has no choice when she discovers her apartment has been broken into. Five simple words will turn her world upside down: “You called for the police?”

When blond-haired, blue-eyed Max Domer arrives, he is ready to protect and serve. It is his motto. It will be her downfall. Max is ready to leave Center City behind, cut all ties, and make a fresh start as a detective on the West Coast. There is nothing unusual about the burglary call he catches, except that the woman is stunning and, for some reason, antagonistic toward police. But she’s caught in someone’s crosshairs - her car is stolen, her father dies, and murder comes to her doorstep - and, like it or not, she needs his help.

But while Max is on the trail of a master crime ring, the real thief sets about stealing his heart. And Jennifer, who innocently lets her guard down, learns she can’t judge a man by his uniform. They are polar opposites destined to stand together and fight for their future.

What listeners say about Thief of the Heart

Not just a girly romance...

This story had a really intriguing crime element that kept me guessing. The pace remained fast but follow able... The main and supporting characters were interesting and really likable. Everything remained light enough to not feel too complicated, but in depth enough to not seem fake...

I found the narration to be easy listening, the character portrayal spot on.

I asked to receive this free review audible book and wrote this unbiased review.. This book is filled with action, mystery, crime, heartache, and love. Max is a dominant cop but he is also caring, protective, and loving. Jennifer doesn't like cops due to a past relationship. She is also caring, a little too adventurous, and loving. Although Max isn't looking for a woman in his life, he has an instant attraction to Jennifer but hers isn't so instant. This book is full of action and intrigue. The narrator does an excellent job of portraying the emotions and personalities of these characters. She gives them distinctive voices and brings the story to life. I highly recommend this Audible book. There is never a dull moment and there are also some intensive love scenes.

Ok, I admit it. It was the Koontz name that snagged my attention. Author, are you related to Dean Koontz because that would be pretty freaking cool.

I am not usually into "romance" type books. I have been trying to be lately. I usually like thrillers, mysteries and horror. There was enough suspense and drama to make up for the fact that it was a romance book. The main character in the book developed beautifully throughout the story and the romance was more or less believable. I felt happy for them at the end so overall this book was a win as it grabbed onto my emotions and made me feel things for the characters.

The narration could have been a bit better but overall it was decent, The male voices were very lackluster and needed more kick BUT that being said, I don't think I could ever be a narrator so kudos to her!

I received this audiobook as part of my participation in a blog tour with Audiobookworm Promotions. The tour is being sponsored by Rena Koontz. The gifting of this audiobook did not affect my opinion of it.

So Jennifer has had a rough time of it when it comes to men in uniform. From the friendly neighbourhood postman turning out to be a child predator to her ex-fiance being a big ol’ cheat she cannot really say she has ever had a good experience when it comes to a man in a uniform. And her first impressions of Max aren’t really all that great either. When Max is called out to investigate her burglary he puts his foot in his mouth – on more than one occasion.

This was a really lovely story. Jeffifer’s growth from (lets be honest here) a wall flower to this amazingly secure and confident woman was really nice to witness and watching her relationship with Max unfurl was sweet and precious. I loved that there was no rush in their story (other than their little surprise).

Max was also a really great character – if a little too perfect. I mean every man has got to have some flaws and he didn’t show us to many of them. He was a bit of a stereotypical male character.

And then all the supplementary characters were really good. From best friends (Laney & Lenny) to over protective brothers (Jerry) their wasn’t a character left out. Add in a bit of a mystery that needs solving a long with some loss that needs to be overcome and I feel like this book had some real grit to it.

My issue with the book was mostly due to the narration. I felt it was a little lacking. The tone of voice came across as all being on one level and I wasn’t an overly big fan of the narrator’s ‘male voices’.

All in all though – a really good listen. Easy to fall into no matter my mood and at times a little tough to switch off.

I loved it! This book was full of drama, romance and suspense! The narration was excellent! It will keep you entertained! The author did an excellent job with the character builds and plot! This was my first book from this author but definitely not my last! I look forward to reading more books in this series! I was given this free review copy audiobook at my request and have voluntarily left this review.