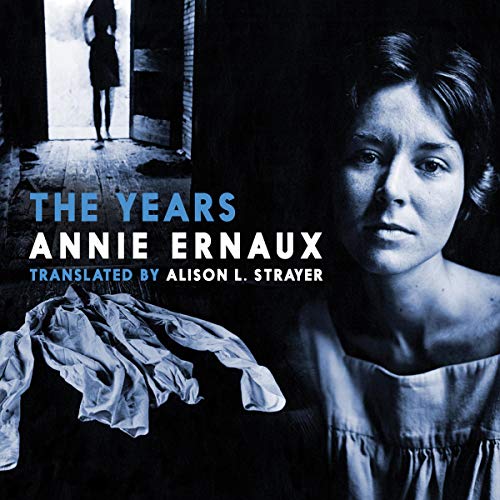 By: Annie Ernaux
Narrated by: Anna Bentinck
Try for £0.00

The Years is a personal narrative of the period of 1941 to 2006 told through the lens of memory, impressions past and present - even projections into the future - photos, books, songs, radio, television, and decades of advertising and headlines, contrasted with intimate conflicts and written notes from six decades of diaries. Local dialect, words of the time, slogans, brands, and names for ever-proliferating objects are given a voice here. The voice we recognize as the author's continually dissolves and re-emerges. Ernaux makes the passage of time palpable. Time itself, inexorable, narrates its own course, consigning all other narrators to anonymity. A new kind of autobiography emerges, at once subjective and impersonal, private and collective.

On its 2008 publication in France, The Years came as a surprise. Although Ernaux had, for years, been hailed as a beloved best-selling and award-winning author, The Years was in many ways a departure: both an intimate memoir written by entire generations and a story of generations telling a very personal story.

What listeners say about The Years

A tour de force which encapsulates a life time, from the varying point of view of a female character in the third person, The Years is not a story, but an interface between continuously changing individual perception and culture.

Strange combination of voice and edition

This is an audio version of the US edition of this title and yet, oddly, the audio is narrated by the quintessentially UK-voiced Anna Bentinck. Bentinck is quite a mellifluous and plummy English voice and so having her say sidewalk, 'ass-holes' (rather than, if she undoubted would if she were to use the word, 'arseholes' -- the UK translation actually has something far ruder), high school, fall (for autumn), just jarred. Not sure why they didn't choose a US actor instead if they were going to use the US translation/edition or, conversely, use the UK edition/translation if they were going to use Bentinck.

That said, Bentinck is generally very good, but not flawless. She offers a strange mispronunciation of 'palimpsest' as 'palimset' (actually a word used several times because the narrator applies it to a feeling of having multiple parts of a life overlaid in a moment of emotional reverie), says 'emancipated' when she means 'emaciated' (a sort of verbal 'typo'-type malapropism that is very inappropriately applied to the bodies of AIDS victims in the text), and says 'parents' for 'partners' which is a simply baffling error.

These are minor points, however, and anyone not using the audio in combination with a printed copy will not notice them greatly, although the idea that the narrator's grown-up children come home 'with different parents' may raise a frown.

This book is impossible to rate. It is a phenomenal cultural history 1940-2017, (France, but relevant to USA and Europe). Many insightful observations, and captures the mood of those years. The intentionally non-personal point of view makes it hard to listen to, if you like a good story. Yet it is fascinating at the same time and hard to put down. Well written. Well read.