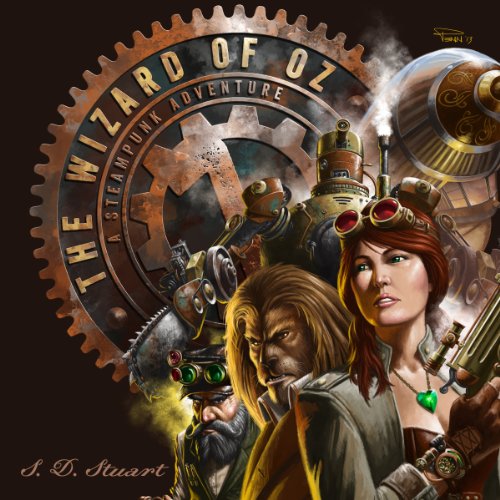 The Wizard of OZ

There is no yellow brick road here. No emerald city. No lollipop guild. This is the Australis Penal Colony, a continent sized prison referred to the world over as the Outcast Zone.

Built to contain the world's most dangerous criminals, OZ ended up the dumping ground for everything polite society deemed undesirable.

From inside this place, a garbled message proves Dorothy's father is still alive, trapped in a prison with only one way in and no way out. Into this place, 17-year-old Dorothy must go if she wants to find her father and keep the promise she made to her dying mother.

She thought she had spent the past seven years preparing to overcome anything that got in the way of fulfilling her promise, but the situation she finds herself is harder and more intense than anything she has experienced before as she drops right into the middle of a power struggle for control over all of OZ. If she has any hope of surviving long enough to find her father, she will need her mother's guts, her father's brains and the unexpected help from those discarded and forgotten.

Everyone she meets tells her the same thing. The only person who can help her is the one prisoner who deserves to be in a place like this and refers to himself by the name, Wizard.

The Wizard always asks for something in exchange for his help. Can Dorothy afford the terrible price he will demand?

What listeners say about The Wizard of OZ

Yes, this was a great new version of The Wizard of Oz. This isn't your typical Dorothy and Toto lost on the yellow brick road. Dorothy is on the search for her father in the "outcast zone" the worlds largest prison. In this completely new adaptation of a classic land the characters and story are brought to life by a very talented enthusiastic narrator. It is a great listen and I would recommend it to all.

Personally all the twists and turns and how everything comes together in this story is the best part. The book keeps you guessing and leaves you wondering how and when Dorothy will cross characters paths, and when she does how it will turn out. The twists and turns and the emotional roller coaster ride this book takes you on is great. The character development is deep and wonderful and sucks you in.

Have you listened to any of Amanda C. Miller’s other performances before? How does this one compare?

This is the first performance from Amanda I have listened to and it was wonderful. Can not wait to listen to more.

If I could have listened to this in one sitting I would have. It took me only three days to get through the book and it would have been a shorter time period if I had more free time!

This is a great book to listen to. You won't be disappointed. I could totally see this being a movie. It's great and I am going crazy waiting for the next one it's that good!

Now to the cover. I do like how I can see many of the familiar characters that I would expect in an imaginative retelling. Including what I would from a steampunk tale. I also see a gun, making me think that this will be much more adult and action packed. I really hope that this will be similar enough for my mind to comprehend Wizard of Oz storyline while being a great stand alone tale.

The first scene, even though I didn't understand why it was important, setup everything quite well. 10 year old Dorothy is a witness to her fathers kidnapping, and her mothers murder. 7 years later she get proof that her father is still alive and is in Oz and so the real adventure begins.

I really enjoyed the fact that Oz isn't some magical far of place that only a couple of people know about. Instead it is a prison, yea a giant jail, Australis Penal Colony, referred to the world over as the Outcast Zone (or Oz). I didn't even put together that this was Australia until about half way through.

Full of great action and intrigue. Even though Dorothy was really hard to like and understand, naive, and dense. I enjoyed the other characters and look forward to learning more about them in the future novels. I really enjoyed all of the similarities to the story of yesteryear. But S.D. Stuart did very well at reinventing almost every aspect of what I thought I knew.

Audiobook submitted for review by the author.

What made the experience of listening to The Wizard of OZ the most enjoyable?

The creativity in making a new story combined with an old one.

What other book might you compare The Wizard of OZ to and why?

What does Amanda C. Miller bring to the story that you wouldn’t experience if you just read the book?

This was a wonderful story

Could be great but is not

Would you try another book from S.D. Stuart and Steve DeWinter and/or Amanda C. Miller?

I probably would... if I had no choice and had to spend a credit. Won't be my first choice though.

What was one of the most memorable moments of The Wizard of OZ?

There are several nice plot twists, and it parodies the original nicely. For me, however, the most memorable moment was that of clear understanding the language is sadly lacking.

This is not a relevant question...

Was The Wizard of OZ worth the listening time?

Yes, but then, I'm a forgiving listener

This book could have been great. The parody, the characters, the plot twists - it has it all. And yet...
The language is sadly lacking, dead in the water. Repeating words - sometimes unnecessary, sometimes unreplaced by synonyms. Standard expressions, as though taken from a list. Classic faults, like "nodded her head" or "blinked her eyes" abound.

Also, it is not, strictly speaking, a steampunk adventure. The technology is constantly reaching towards the standard sci-fi (automatons, humanoid robots and more). This is not a bad thing in itself, but the overall impression is that of an overzealous teenager unwilling to stay in the chosen framework.

Narration... or, you know, whatever.

I found the story enjoyable with just enough hook to keep me wanting to know what happens next. But was mildly disappointed with only the partial conclusion/to-be-continued ending. I will have to say that while the narrator could have been worse, she read as though every sentence was like pulling teeth. Every sentence ended with a down note, so much so that I kept expecting to hear her qualify each sentence with a teenage: "or, you know, whatever". The narrator simply seemed to be keeping a seat warm and collecting a paycheck. I wouldn't have been surprised to even hear her sneak in an occasional "can I go now?". I guess that's a testament to the book itself, in that I was willing to persist through the teenage-droning, just so I could find out what would happen to Dorothy and company next; that and I find myself wanting to follow up with the next book to find out the full conclusion, in spite of the narration.

For comparison, the narrator's delivery reminded me so very much of female comedian, Kathleen Madigan. That kind of diction works as a comedic schtick, not so much in narration.

A fantastic new twist on a classic story

While I've never been much of a fan of the original Wizard of Oz, this story has enough unique points to keep it both fresh and entertaining. While there are many obvious parallels, it also adds in many new twists and turns to keep the reader/listener interested in the plot. Amanda C. Miller also does a great job of making every character sound unique and different while at the same time never falling flat in the narration. I would definitely recommend this to both fans of the original story and those of the steampunk genre and am looking forward to listening to the sequel.