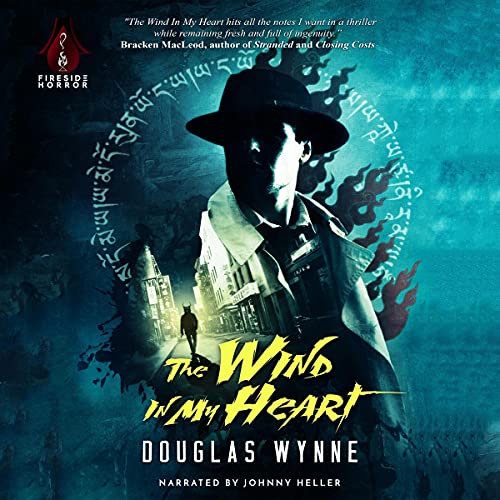 The Wind in My Heart

Miles Landry is trying to put violence behind him when he takes up work as a private detective focused on humdrum adultery cases. But when a Tibetan monk hires him to find a missing person, things get weird fast.

Charged with tracking down the reincarnation of a man possessed by a demonic guardian from the Tibetan Book of the Dead, Miles is plunged into a world of fortune-tellers, gangsters, and tantric rituals. The year is 1991, and a series of grisly murders has rocked New York City in the run up to a visit from the Dalai Lama.

The police attribute the killings to Chinatown gang warfare. Miles - skeptical of the supernatural - is inclined to agree. But what if the monster he's hunting is more than a myth?

Interview with the author:

What makes this horror/noir novel so special?

I’ve always been attracted to mashups of my favorite genres. I think what makes The Wind in My Heart special is that it takes the best of both worlds from crime novels and horror thrillers and adds a dash of the supernatural with a Tibetan twist. I’d like to think it’s a unique cocktail.

Tell us more about your lead character.

Miles Landry is a private detective with a short fuse and a black sense of humor. He’s suffered some personal losses that have left him pretty hardened. He’s a pragmatic ex-military man who views the world with a skeptical eye. But he also tries to keep an open mind when his clients have an open wallet. So it's interesting to see what happens when a group of Buddhist monks hires him to solve a supernatural mystery. His world view is bound to clash with theirs, but he may learn something along the way.

Why should (listeners) give this book or your work a try?

So much of supernatural horror and thriller fiction is based on Judeo-Christian premises. I wanted to explore a different perspective on gods, demons, and the afterlife, and to contrast that with a very American setting. The result is a violent, urban occult thriller with the voice of a classic noir. It’s a quick, entertaining listen with some deep philosophical roots that have interested me for decades.

What listeners say about The Wind in My Heart

Good stuff. Looking forward to listening to more books by both!

No one narrates Noir quite like Johnny Heller! This takes a surprising twist though and doesn’t just follow the same old tropes. The fantastic internal dialogue Douglas Wynne wrote was carried to perfection by Heller. Such a good listen!

A fun little jaunt down the back alleys and docks of Noir City, but with a refreshing angle on the genre. Johnny Heller delivers the goods, per usual, and the story was well-written with great pacing and lively characters. There was a small amount of ambiguity and confusion in the climactic scene that I felt cheated the listener (just a little bit) out of the payoff we'd been building up to. But overall, I really enjoyed this book.

This is an awesome twist to the classic detective story. I thoroughly enjoyed this one.

Well-written, not too hard to follow, and hits that spot for me that craves a good PI story with hints of something supernatural. I was hoping for more cosmic horror but the spiritual buddhist elements were unique. If I could change one thing it would be the present tense writing. It was jarring and hard to pay attention sometimes when things were written as if they were currently happening. It's a matter of taste but I much prefer the tried and true past tense.
Also the narrator does a great job so I can't fault him but playing a young 30 year old PI he sounded more like a small fat guy in his sixties. Still, the talent and skill overrode that sensation for me.
I award this 5 stars.