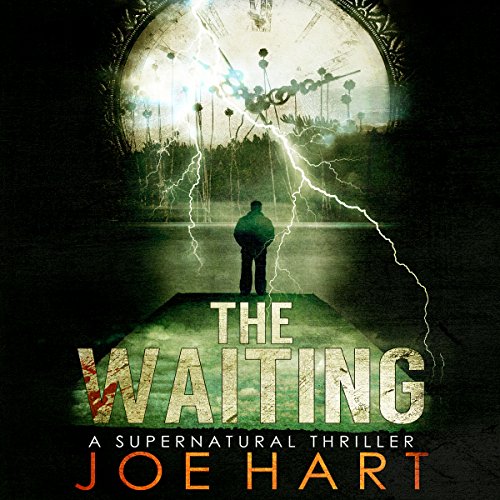 By: Joe Hart
Narrated by: Eric Aschenbrenner
Try for £0.00

His life has been shattered by events beyond his control and regret is his constant companion. His wife is gone, lost to an unbeatable cancer. His son has been mentally and physically handicapped by a tragic accident. He's been fired for using company funds in a failed attempt to save his wife's life.

On a whim, Evan accepts an invitation to housesit on a picturesque island in northern Minnesota. At first it seems like the perfect second chance for he and his son to recover and rebuild their life together. But there is something very, very wrong with the house and all that occupies it.

And worst of all, Evan doesn't know if the house is haunted...

Or if it's all in his mind.

What listeners say about The Waiting

You will be scared such books cost money

Talent.The writer needs to learn how to write.The overall premise was there but the undertaking of bringing it to the reader was not, because the premise was everything and the story was not.

What was most disappointing about Joe Hart’s story?

Everything.There was an idea but it just went nowhere and was very ametuerish.

Story.If there was a better story ,some writing skill and competence by the writer, the narrator would have benefited.

The review is for other people

After his wife succumbs to cancer, Evan and his son Shaun take a sabbatical to recuperate while housesitting at a friend’s place on a small island in Minnesota. Unfortunately, while the seclusion is good for Evan’s writing and for getting some time with his son, they soon realize that they are not entirely alone. Ghosts of the past resurface and have set their sights on Evan and Shaun. With the help of a pretty psychiatrist they will need to track down the history of the place and solve its mysteries before all of them are lost forever.

The narration for this one was very good and the pacing was perfect for the story line and really added to the creepy, dark atmosphere. The characterization was well thought out and the relationship between father and son was spot on. There were also a few twists that I didn’t see coming and I thought they were smartly done and not clichéd as they may have been with a lesser storyteller. A well done supernatural chiller.

All I can say is that it is awful. A very limited vocabulary and narrator's pauses are odd. It feels like he picked a topic he knew nothing about and didn't brother to do any research. Found myself rolling my eyes a lot listening to some of the horrible dialogue. I saw 4 stars and thought that meant it was good. I didn't see that it was only 9 ratings.

Started Out Promising but Fizzled Out...

The main characters were well rounded and interesting and good suspense in the beginning then it seemed like Hart lost interest in his own book somewhere in the middle... all that character building and suspense goes nowhere then the end is a mess of confusion and ridiculousness. I had to listen to the last couple of hours at least 3 times to "get it" and all I got was a feeling of disappointment and annoyance.

Not disappointed at all, and had a very surprising end. Enjoyed listening , and couldn't put it down. Suspenseful and thrilling.

Eric did a fantastic job reading this one. The story is really good and entertaining. I had no idea where it was going but that’s ok! I liked that. The characters were great. I loved the ending. I think too few authors are willing to go there so when one does, I applaud them and don’t forget it. This was my first dose of Joe Hart but certainly will not be the last.

Horror story kept my interest. Good plot, but the narrator had an odd way of speaking "in sentences." Hard to describe but it was difficult to get into the mood of the story because of it.

Wonderfully scary, except for the ending.

Would you listen to The Waiting again? Why?

I've heard about author Joe Hart before, and am so glad Audible added a couple of his titles. I hope they add more! His writing is superior to other authors in this genre. The ending was disappointing, but nevertheless, I recommend this title to anyone who wants a good scare.

Narrator was very good I thought and the story was enjoyable, somewhat believable, even gave me goosebumps at times. BUT the ending????? Weird!!!

Struggled to finish it. some parts grabbed my attention but the finish was anticlimactic. The performance was totally horrible. The reader had no emotion and was very monotone.

Review of The Waiting

Where does The Waiting rank among all the audiobooks you’ve listened to so far?

One of the best.

I really liked the narrator. He had a great Irish accent for one of the characters that I thought was really charming. Additionally, I could really see this book being turned into a movie and I think it would be better than some of the scary movies I've seen recently.