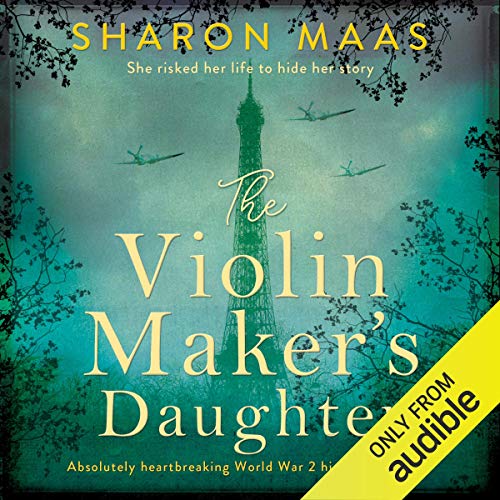 By: Sharon Maas
Narrated by: Annie McKenzie
Try for £0.00

When the Nazis march onto the cobbled streets of Colmar on November 1st 1940, Josef, a Jewish violin maker, gathers his wife and daughters closely to him and tells them everything will be alright.

But one year later, three sharp knocks on the door at midnight turn his 17-year-old daughter Sarah’s world upside down. As the oldest child, Sarah must be the first to leave her family, to make her escape in a perilous journey across France via Paris to Poitiers. And she must hide who she is and take a new name for her own safety. For now, bilingual Sarah is no longer a French Jew but a German girl.

As she bids farewell to her beloved father and family, Sarah has hope, against all odds, that she will see them again when the war is over. But, travelling through the mountains she finds herself in terrible danger and meets Ralf, a German deserter, who risks his own life to save her.

Ralf and Sarah continue their journey together, keeping their identities secret at all cost. But when Ralf is captured, will Sarah pay the ultimate price for sharing who she really is?

A gripping and heartbreaking account of love, bravery, and sacrifice during the terror of war. A story of standing up for what you believe in, even if it’s going to break your heart. Perfect for fans of The Tattooist of Auschwitz and The Ragged Edge of Night.

What listeners say about The Violin Maker's Daughter

The narrator was poor ,which didn't help the story. I found it very hard to cope with the main character !

The way this book is read has completely put me off continuing. It is false, the understanding of the tale is entirely missing. The accents are totally out of sync with the narrative. The expressive reading it deserves is missing.
I have tried 4 times to listen but will return it.

Probably a good storyline but...

I couldn’t listen another minute to the narrator!!! The story was completely ruined by her voice! The different voices she attempted were completely off putting!

The story was very enjoyable but lacked complexity and was predictable. Nothing like the brilliant Tattooist of Auschwitz. Saying that l found the characters delightfully human, relatable and compelling and listened to the end.
The worst part was the narration with northern english accents used to differentiate some the characters. The staccato style of reading to add dramatic effect was irritating and overused.

I so nearly gave up on this book because of the annoyingly mannered narration. Unnecessary pauses between words from beginning to end. Were they for dramatic effect? There were also mispronunciations: “victuals” has a silent C, copse was mispronounced, also Basel. Surely these mistakes can be bloopered out? Oh dear.

Don’t give up on the book. It gets real good

I got very tired of listening to the main characters foolish self centered constant complaining that I almost quit listening to it and getting my credit back. Endless going on and putting people in danger She had to learn the hard way. After she comes into her more mature self the story really takes off and I hated to see it end. Excellent epilogue. t
Look forward to more from this author

Great story with one flaw!

While I enjoyed the story over all and the narration was amazing, I wish the writer had focused less on the naïveté of Sarah. I realize that it was important to the story but it took up way too much time in the story. Then to have it change instantly just to return was annoying.

I wish the author had spent yet as much time developing all of her characters as she did this one.

I can’t get enough historical fiction surrounding WW2. However, this book had a main character far too distracting to qualify as such. While I understand she was written intentionally as annoyingly immature, it simply went too far and it was hard to get caught up in the complete story. I found it unbelievable that anyone could fall so head over heels in love with Sarah when their only experiences with her were overwhelmed by her ridiculous demeanor. It simply wasn’t fathomable. I also felt the Monique angle wasn’t fleshed out - just a few weak nods. I am curious if actually reading the book in print would take some of the whine out of Sarah - but I don’t think I’ll do that experiment.

this was the first time in a long time I couldn't put the book down. I liked that the characters had flaws. at times the story seemed a bit simplistic but I didn't mind. the story moved along at a nice pace.

it's only very few books I cannot finish but this is one, I made it through 2/3's of the story only because a previous review stated "don't give up it gets real good" . well that did not happen, the only thing it did was get more maddening as it went on. Finally I had to close the book before I ended up throwing my computer across the room! People helping Jews escape Nazi Germany is usually filled with sacrifice, terror and heroism coupled with amazing courage on literally everyone's part but this book is full of immaturity and stupidity. Its a slap in the face to the French resistance unless the author redeemed her self in the chapters I couldn't/didn't read.
it is impossible for me to recommend this book or to waste the credit.
I had no objection to the narration.

First time author for me.

This is the story of a teenage French girl that in 1943 was forced to flee the Nazis in her home province of Alsace when it's discovered she was in fact, Jewish and not German as her parents were trying to hid behind. The story follows her trek around France, the situations she encountered and the people she met. Sometimes it seemed like she had a lucky star watching over her as she came close to danger, witnessed its horrors but never got completely swallowed up where she was ruined for life or worse. Still it was an entertaining story, another story of many that arose out of the ashed of World War II.

I loved this book. I could not stop listening. The writing, the hope, the growing up. So riveting.

Annie McKenzie. I could listen to you speak and narrate all day. What a gift the two of you are.

I have listened to all of Sharon Maas' books and enjoyed them. This one however created a character (Sarah) who was somewhat unbelievable and naïve to the point of stupidity. From identifying herself as Jewish in a Nazi infested café, throwing tantrums to call attention to herself and her resistance lover, to eventually telling her 'best friend' who is part of Nazi collaboration family about her true love Ralph,(a resistance fighter) and thereby getting him killed, it was a fright-fest of stupid actions. Granted, she's only 17, but during this period even the very, very young had learned to fear to avoid the Nazis. Definitely not my favorite.

Couldn’t get past half way

I don’t enjoy books where the main character is not likable. You want this young woman to learn, to grow into the heroine that so many young women did in real life during this horrible time. She starts with potential and maybe she ends up the way I would like, but I can’t get past the ridiculous brat she has morphed into half way through. If there were any girls this stupid in real life, they didn’t survive to tell about it. To write anything different is to underestimate the horror that was WW2.

So disappointed in this after enjoying the Soldier’s Girl.

Overall I enjoyed the story but I got very frustrated with Sarah’s character. I could only give 4 stars because of that.