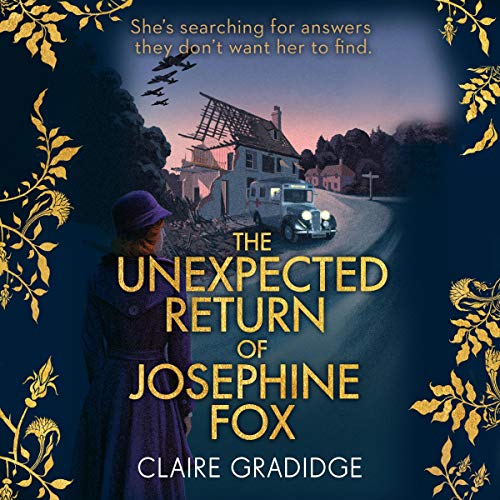 The Unexpected Return of Josephine Fox

The Unexpected Return of Josephine Fox

Winner of the Richard & Judy "search for a best seller" competition.

Everyone has secrets - some are just more deadly than others....

Josephine 'Josy' Fox hasn't set foot in Romsey in over 20 years. As an illegitimate child, her family - headed by her controlling grandfather - found her an embarrassment. Now, she wants to return to what was once her home and uncover the secret of her parentage. Who was her father, and why would her mother never talk about him?

Josy arrives the day after the Luftwaffe have bombed the town. The local pub, The Cricketers' Arms, has been completely destroyed, and rescue teams are searching for the remains of the seven people known to be in the pub at the time the bomb hit. They are shocked, however, to uncover eight bodies, not seven. The unidentified eighth body is that of a teenage girl, whom no one in the town claims to know. Who is she, how did she get there, but most importantly - who killed her?

Teaming up with local coroner and old friend Bram Nash, Josy sets out to establish the identity of the girl and solve the riddle of her death. In doing so, she also uncovers her own personal mystery.

Be careful what you wish for....

It is an exceptionally well written book, which was not padded out with long boring repetative explanations. I get though a book a week but this was so captivating I finished it in just over a day. I found it engaging and intriguing from the start. This is just such an excellent book on all levels, you could just imagine this type of thing went on at that time regarding a persons worth, class structure and moral values of the past. I would highly recommend it, thought provoking read. Just hope this is just the first book of many for this writer.

This was certainly different to a lot of stuff out there, but I think I would have enjoyed the book version more than the audio version as the narrator pronounced various words incorrectly, and I don't believe there is any excuse for that. "Intestate" came out as "interstate", and I can't even begin to excuse the way she said "amalgam". So read this one, don't listen to it. A different take on a story, and something a bit different, which can never be a bad thing.

I wasn't sure what to expect from this book, but I was totally drawn in to the story, the characters are very well constructed and the general attitudes towards women between the wars is very well shown here.

The story was good and I was emotionally invested in the events and personalities.

Nicely narrated too by Lucy Price-Lewis. I think this is one that I will read again.

A modern mystery in a wartime setting

A modern detective story in the best possible way. The story is a dark and beautifully crafted tale set in small town England in the second world war. And in a community that would rather ignore murder in its midst than admit that one of their own might have an unseemly secret.
It feels deeply researched and authentic, with a mystery that holds a mirror up to some of the darkest aspects of pulling together on the home front.
Well read, it's easy to get pulled into the story. I was captivated by the drama right to the end.

Fingers crossed for a sequel!

Really enjoyed this book, so much so that I was plugged in every time I had a spare few minutes! Wartime whodunnit written around a woman coming home to work out who her father is after her mother dies. Likeable, believable characters and extremely well read. Plot line was good although a little predictable at points but it had a decent twist at the end so I wasn’t 100% right. Really hoping there’s going to be a sequel as I’d love to know if Jo and Bram’s relationship blossoms

Great narration, brilliant storyline, would like more by this author and set in this timeline.

I really enjoyed the book, a good story and great characters. The setting during WW2 is an evoking backdrop. I hope there will be more of Jo and Bram.