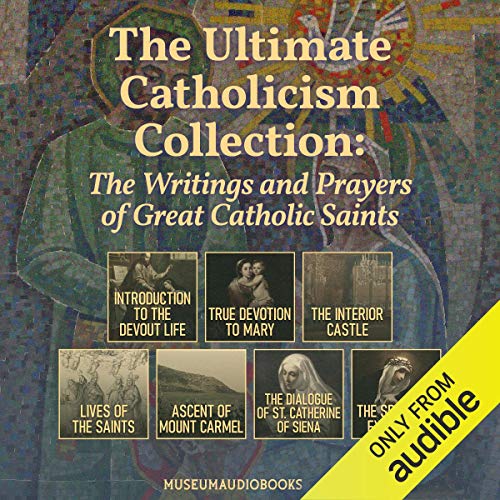 The Ultimate Catholicism Collection: The Writings and Prayers of Great Catholic Saints

The saints, the heroes of the Roman Catholic faith, lived lives of holiness, dedicated to serving God. The saints lived at different times in different places throughout history, but they all shared a love of God that has been documented through the teachings of the Church. Today, the saints serve as examples for all Catholics, showing the believers how to lead a more spiritual life. Catholic devotions are particular customs, rituals and practices of worship or in honour of the saints that are in addition to the liturgy of the Catholic Church.

The Ultimate Catholicism Collection: The Writings and Prayers of Great Catholic Saints includes Book 1: Introduction to the Devout Life. In this classic devotional book, St. Francis de Sales (1567-1622) shows the average believer how to become closer to God, with valuable advice on a range of spiritual subjects. St. Francis avoids the extremes that might lead to imbalance; his purpose is to arouse in the listener a complete love of, and trust in God. This life of devotion is open to everyone. The book is easy to understand, explaining in simple terms how to expand one’s spiritual life, with examples from scripture and from a variety of other sources. It covers topics such as creation, cleansing the soul, confession, sin, death, judgment and paradise. First published in 1609, the book enjoyed great popularity in both Catholic and Protestant circles and was widely translated.

Book 2: True Devotion to Mary. St. Louis De Montfort (1673 - 1716) was a French Roman Catholic priest, and was made a missionary apostolic by Pope Clement XI. Montfort is considered as one of the early writers in the field of Mariology, and is also known for the practice of praying the Rosary. From his youth he displayed a singular devotion to the Virgin Mary.

Book 3: The Interior Castle, also titled The Mansions, is a classic work of Christian mysticism by St. Teresa of Ávila. Published in 1588, the text serves as a practical guide for those who wish to achieve mystical union with the divine. Teresa viewed the soul as a “castle made of a single diamond” which contains seven mansions or dwelling places. The concept of the immanence of God - who dwells in the seventh mansion - was central to her spirituality. The Interior Castle guides the believer on an interior journey through the seven mansions toward mystical union. Prayer and meditation are the preconditions for entering upon the quest. The first three mansions are entered through daily prayer, on the active stage of the journey. Mansions four to five involve mystical prayer, and is considered the passive stage as the divine role in the process increases. Mansions six and seven are the betrothal and the consummation of the mystical marriage.

Book 4: Lives of the Saints. Alban Butler (1710 - 1773) was an English Roman Catholic priest and hagiographer. His great work, The Lives of the Fathers, Martyrs and Other Principal Saints was first published in four volumes in London, from 1756-1759.

Book 5: Ascent of Mount Carmel by Saint John of the Cross, the Spanish mystic and poet, Catholic saint, Carmelite friar and priest, and a leading figure of the Counter-Reformation. The Ascent of Mount Carmel is divided into three sections, and presented as a commentary on four poetic stanzas. St. John portrays the various mystical experiences that the soul must endure in its ascent to the metaphorical Mount Carmel (the place of God or union with the divine).

Book 6: The Dialogue of St. Catherine of Siena. Catherine of Siena (25 March 1347 - 29 April 1380) was a mystic, activist, and author who had a great influence on Italian literature and the Catholic Church. Catherine's mystical theology was employed towards practical ends for her own spiritual life and those of others. She used the language of medieval scholastic philosophy in the "Dialogue", a poetic and prophetic work. Advocating for continuous, humble prayer, she hears God the Father answering her requests in order to receive help to be saved. Catherine gives special importance to mental prayer, but also recommends vocal prayer. Writing about God's truth and love, she considers charity to be the greatest virtue.

Book 7: The Spiritual Exercises of Ignatius of Loyola are a set of Christian prayers and meditations written by Ignatius of Loyola, a 16th-century Spanish priest, theologian and founder of the Society of Jesus. The work is divided into four thematic "weeks" of variable length, designed to assist the worshipper in acts of devotion.

What listeners say about The Ultimate Catholicism Collection: The Writings and Prayers of Great Catholic Saints

a fantastic collection of truly Devout Spiritual books. although the lead into next chapter/section could be improved.
worth a credit & definitely worth spending quality time in contemplating meditation

The reader is important!

Overall this was an excellent listen. My only difficulty was the account of the saints in the end. Disappointingly, I could not get thought it. The content was excellent, but read by an actor who made it about him, instead of material. This is an audio book, not an over dramatic part in a community theater production.