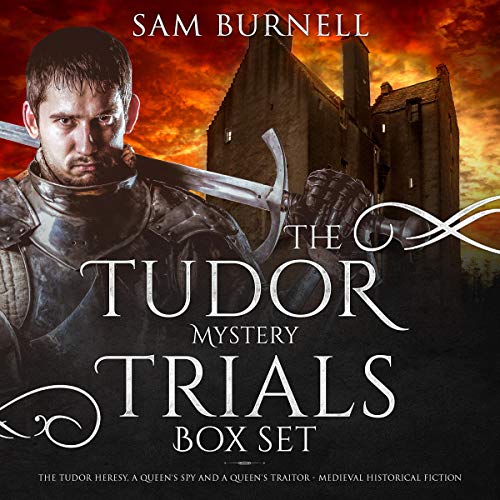 Meet Richard Fitzwarren - an anti-hero with a dubious past, questionable morals, but unswerving loyalties. Jack Fitzwarren, Richard’s displaced bastard brother, seeks a place at his brother’s side. Impulsive and hotheaded, his attempts to gain his brother’s acceptance and approval often end badly. Finally, the brothers are brought head-to-head when Richard tries to foil a plot against Elizabeth I.

Can Jack murder his brother to save a woman he’s never met?

Will Richard accept his fate and fight? Or will he run?

As Tudor England erupts following the death of Edward VI, can one young spy protect his queen?

Richard Fitzwarren, caught in the middle of a cruel family feud, wants nothing more than to make his own way in the world. A childhood friend of the Princess Elizabeth, he cannot forget his loyalty in her time of need.

Pressured by her sister Mary, Elizabeth’s continued existence remains precarious throughout her reign. The divide between Catholic Mary and Anne Boleyn’s Protestant daughter Elizabeth is a deep one.

“It combines murder, mystery, and intrigue in a most masterful way.” (Rita Kroon, author of Letters from the Past)

I’m a lover of the Shardlake books by CJ Sansom and Bernard Cornwell’s Sharpe series so I was a bit worried this would turn into a “romance,” and while there are credible female characters it’s not a romance at all. Richard Fitzwarren, like Sharpe, is a no nonsense anti hero, who ends up in the wrong places at the wrong time.

I was not surpised to find out that this series had been optioned by a TV network. It would follow on in the Game of Thrones tradition – you just never know what’s going to happen next. However unlike Thrones this is set firmly in 16th Century England and the historical background is credibly accurate.

The usual nonsense with clunky text and much repetition. I’m afraid the narrator is awful too. His accents are dreadful and waver all over the place.

The author transported me back to the 16th Century effortlessly, and time flew by. The plot twists, the defeats are realistic and historical detail accurate.

I came across the first book in the series last year on kindle, and then Amazon suggested the audio versions, the narrator is top notch, and really brings to life the characters. My only comment would be that he makes Jack sound a little old, I always think of him as “Richard’s little brother.”

If you are into binge audio listening like me then this is great. The story also continues when you get to the end with a second box set with another three full length books included following the intriguing story of Richard and Jack.

A good story, an excellent author and a wonderful narrator have come together to make this a feast for those who love historical fiction. Set in Elizabethan England the story follows the paths of two brothers as they try and make their way through life. There are many obstacles thrown in their way, some you can see coming and some just land unexpectedly.

Loved the characters and the setting. My favourite character just has to be Lizbet – what a woman – you can’t help but like this cheeky and loud young woman who seems to be afraid of nothing. Trust me, Lizbet will make you smile. Women in the 16th Century were extremely oppressed with very few rights and I think she has been purposefully included as a way to get around this, as a modern reader we would have extreme difficulty in dealing with the way women were actually treated and spoken to, so a little fiction is not a bad thing.

If you like historical fiction and a mystery then this will suit. The characters take a little getting into, only because they are extremely realistic, there are no instant hero’s in this book, not to begin with anyway. As you follow the story though you find deep loyalty, trust and honour will develop and in essence that’s what the story is about.

This is the first in the Fitzwarren audio series, and I was delighted when I got to the end to find out that there was more – I was not ready to leave Richard and Jack behind sure that their story was not quite at a close.

Richard Fitzwarren is a tudor noble on a mission to take back what he has lost. Along the way he finds, by accident, Jack, his estranged brother. Their relationship starts out as a difficult one but over time when they are tested against each other they finally unite. Enjoyed the sense of time the author brought to the book along with some interesting historical details. It’s always nice to go away and think “well I never knew that!”