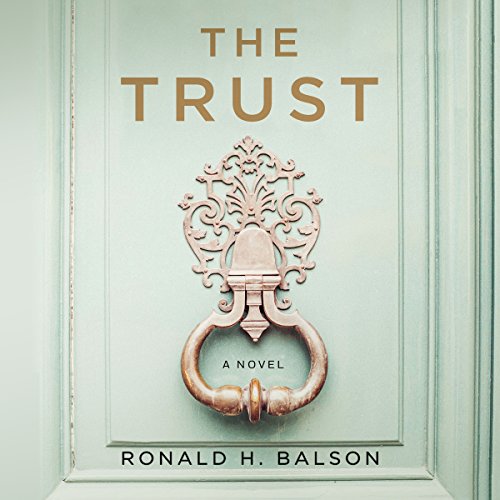 The newest audiobook from Ronald H. Balson, the international best-selling author of Once We Were Brothers, finds private investigator Liam Taggart returning to his childhood home for an uncle's funeral, only to discover his death might not have been natural.

When his uncle dies, Liam Taggart reluctantly returns to his childhood home in Northern Ireland for the funeral - a home he left years ago after a bitter confrontation with his family, never to look back. But when he arrives, Liam learns that not only was his uncle shot to death, but he'd anticipated his own murder: In an astonishing last will and testament, Uncle Fergus has left his entire estate to a secret trust, directing that no distributions be made to any person until the killer is found. Did Fergus know but refuse to name his killer? Was this a crime of revenge, a vendetta leftover from Northern Ireland's bloody sectarian war? After all, the Taggarts were deeply involved in the IRA. Or is it possible that the killer is a family member seeking Fergus' estate? Otherwise, why postpone distributions to the heirs? Most menacingly, does the killer now have his sights on other family members?

As his investigation draws Liam further and further into the past he has abandoned, he realizes he is forced to reopen doors long ago shut and locked. Now, accepting the appointment as sole trustee of the Fergus Taggart Trust, Liam realizes he has stepped into the center of a firestorm.

The Trust is a gripping audiobook from an acknowledged master of secrecy and suspense.

What listeners say about The Trust

Great Story - The narrator was amazing

The narration was great! The story frustrated me as the lead protagonist was made to be a top private investigator but was the worst at following clues throughout the book. Not sure why the author did that. Would have been much more convincing as a car salesman.

I absolutely loved it!!!

Im astonished at the amount of negative reviews! I thought this book was great and, the narration was spectacular! I couldn't stop listening - I stayed up until 4:30 am to listen and finished in day and a half. Overall, it's an excellent story, full of drama and action; and, the narration is fabulous! I definitely recommend this book!

So a past CIE operative an now private detective never looked into the death of his father and sister until he was in his mid 40's?!!
Very implausible plot lines.

Narrator is terrible. Every conversation is high pitched super dramatic. Writing is repetitive and redundant. He explains same things over and over. Every time something bad happens, the protagonist says, “it’s all my fault! I’m to blame! How could I have..,.” Gag! The story isn’t half bad but needed to be cut in half by removing all the hysterics. Don’t buy it.

I liked everything about this book - for me it was in that category where towards the end, you want to stretch it out so it lasts longer. Thinking about it now in retrospect -- I was too busy following the story to think about this while listening -- I realize just how skillful the author is. Lots of characters, but you have no trouble keeping them apart and remembering who's who. An action scene at the end, exciting but not endlessly tedious as they sometimes can be. Enough plausible suspects to keep you guessing.

This is the first book I have listened to by this author. Liam Taggart is the worst detective ever! I don’t think he actually did any detecting in this book. He simply overreacted to every little thing and ran around like a chicken with its head cut off.
The concept of the book interested me, but the story was very annoying, repetitive, and predictable. I have no plans to listen to any other books by this author.

I became so tired of listening to the lead character - always tense and angry - the narration did not seem to match what the author intended.

I have read every one of Ronald Balson's books. Each is as good as the last. His books keep you hooked from beginning to end. Never a boring chapter. The Trust is a must read. It's another home run by Ronald Balson. Only 4 books so far, and in my opinion is second to none as a story teller. Ronald, keep the books coming!!

This is a perfect book in every way!
Great story and the narrator is amazing!
Sure hope there will be another Mr Balson.

I have waited several months for this book to come out and marked my calendar even for the release date!! Purchased on audible THE DAY of release and have listened to for days trying to make it last longer.

What a great listen!! The story was captivating, I kept thinking I had figured out and hadnt!

I love the characters Liam and Katherine and the narrator is FANTASTIC, although I just lost his name as I was writing this.

I cant wait to see what these two characters do next!!