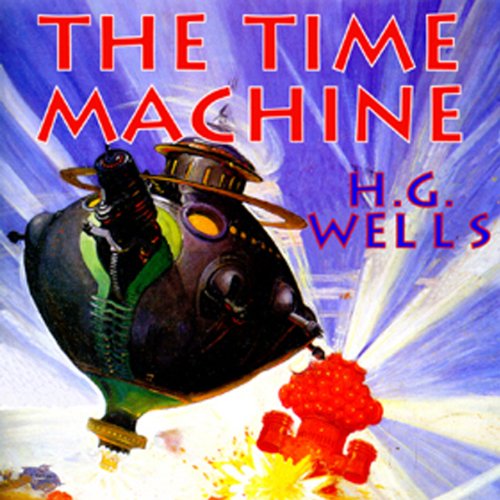 The time traveler first steps out of his magnificent time-transport machine in the year 802,700. He finds Earth populated by a race of slender pacifists and decides to study this lush land of flower people before returning to his own age. These pacifists, he discovers, have built their wealth on the backs of a slave class forced to live below ground. As the conflict between them surfaces, the time traveler finds that his only means of escape, his time machine, has been stolen.

Wells' amazing view of the future, propelled forward from his own Victorian era to the present, serves both as classic science fiction and as a parable of the chasm between the working-class suffering and the upper-class privilege of his day.

What listeners say about The Time Machine

I have read this book a few times before. But this I time, I read it after reading H.G. Well's Outline Of History. Many of the same philosophical thoughts are expounded upon in both books. Wells writes about the evolution of the human race in The Outline of History, and about the devolution of the human race in The Time Machine. The Morlocks bear an erie resemblance to the Neanderthals, whom Wells described as being remembered in the human racial collective memory as the 'ogre' of mythological prehistory. The crabs and insects who ruled the Earth of the early Devonian Period 400 million years ago are described by Wells in Outline of History, and they are similar to the giant crabs he describes who rule the Earth at the end of the planet in Time Machine. For anyone who wishes the Time Traveler had spent more time in that deteriorated library/museum of the future, try reading Outline of History and Time Machine back-to-back. Good scientific knowledge mixed with some action-thriller moments.

Fantastic story and well narrated! It has been awhile since I read the original, and now I realize that the movies somewhat diluted / ruined the adventure. I highly recommend this one.

I enjoyed this old science fiction story. The narration was good and reminded me of watching an old black and white movie. I wonder if he went forward to life in the future.

Yes, this is an easy listen and is a great, classic book. It wasn't what I expected, but I enjoyed where the story went.

Could have definitely finished this book in one go. It was easy to digest and enlisted beautiful imagery.

Although the story wasnt quite what i was expecting, it was still pretty good for its age.

Loved the story, not the narrator

The story is a classic, however the narrator made it a real struggle to finish.

Finally some context for that Simpsons episode

Not an amazing story on its own merits but still worth a listen to discover the origin of some modern stories.

The narration was just okay.

Great story! It answer two questions: What happens if we cease to fight; and what sort of simple inventory will serve as a testimony of the human nature...

Excellent reading of the great classic.

While I have seen numerous dramatizations of the science fiction masterpiece, I hadn't read it.

I enjoyed the audio performance very much and will read my Kindle book on my Paperwhite this summer or on a vacation either before or after.

Meanwhile, I have listened nightly to its conclusion and it was wonderful. Thank you.

I don't know why I never read The Time Machine until now, it may have been due to that horrific movie version released years back, it put me off from thinking the story was any good, but I found an instantly enjoyment of this book. The scientific theorizing that occurs in the opening conversation drew my interest right in and before I knew it I was over halfway complete. It was a quick listen overall and a good piece of classic scifi literature and the tale as if from a scientific observer was unique compared to other modern scifi reads