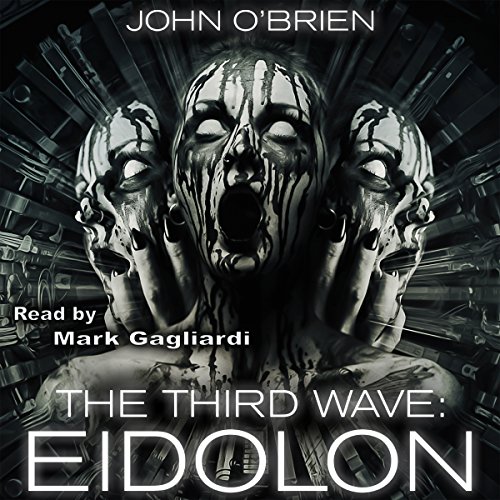 By: John O'Brien
Narrated by: Mark Gagliardi
Try for £0.00

In 2003, the largest recorded solar flare collided with Earth. The sensors measuring the solar storm were destroyed at an X28 rating, but it was determined later to be an X45 class flare. A satellite monitoring solar activity picks up something far surpassing that classification and on a collision course.

A solar storm, so strong that X classifications no longer apply, hits the CERN large hadron collider at the moment of particle collision, sending a quantum wave around the world. Souls are ripped from the over seven billion people that are in its path, many immediately succumbing. Those remaining either feel nothing or are tormented by endless agony. Only a few escape its path.

Sam and his teenage daughter Erin return to the surface to find a very different world from the one they left. Stranded, they must adapt quickly or become one of the creatures that now roam the earth.

In the Middle East, a small team of soldiers may be the only ones left in a harsh environment overrun by creatures. With very few options and far from any refuge, they set out on a quest for help. Will the reapers hunt them down before they make it to the coast?

Commander Lawrence resurfaces after a successful deep dive test of the Navy’s new toy, only to find a transformed world. The floating derelicts of his escort vessels don’t begin to show the horrors of what he’ll find ashore.

What listeners say about The Third Wave: Eidolon

Great concept and I liked the first parts, but the ending was a letdown. As if the author had thought this to be a series, but then changed his mind and had to finish it off quickly.

good story could have been more

Amazing take on the Apocolypse!!

I LOVED this book! it sounds like its going to be a stand alone story, but it works out like that. this was an amazing new take on an apocolypse, and Definately made me tear up in a few spots. What a great novel. im glad I bought it 💖

i loved the story and narration well worth the purchase get it now it's awesome.

Solid thriller from the beginning to almost to the end

The story was built up brilliantly. The speed, flow, just everything worked perfectly. The backstory was interesting and felt believable.

It's hard to pinpoint the exact moment when I felt disappointed without any spoilers. And I'm not sure is it even fault of the book or just me. Let's just say that we had a disagreement about the whole ending and how we arrived there.

For the most part the book is great survival horror like thriller with fast paced intense moments and few slower parts where you can give your heart a moment of rest before fearing for your and the main characters' lives again. I'm 35y man and I swear to you that after listening to this in the dark winter evening and then having to drive to an empty old cottage to fetch something from the carage just outside the city I needed a moment of silence to listen to my surroundings before I had the guts to open the car doors and step outside.

Then comes the disappointment few hours before the ensing. It feels like the writer got lazy or didn't have anyhing else to say... the book takes a long jump into the future and it's like "ok, we're here, oh, and they lived happily ever after, bye".

Did the author conceive of that lame ending before he started writing, or just got sick of writing and decided to end it with inexplicable sudden magic.

As some others have said, different take on a zombie apocalypse story, but imagine one that ends with the survivors struggling, and then the next page it says “years later everything was fine” the end....
Spoiler alert the ending is very much like that.

Positive – at least it didn’t go on as a terrible series of books that ended that way.

Story had some good characters, but was bogged down by too many characters and too many loose ends at the finish line. Narration was just mediocre. He didn’t vary the voices enough in most cases.

If you like this author, give it a try. If you don’t you should probably look elsewhere for your dystopian fix.

Ultimately I really liked this book. The beginning for me was slow and complex. The most difficult part was understanding the hadron collider experiment and the effect the accident had on people. Once that was clear the story flowed more freely and I began to enjoy and appreciate the characters and the struggle they were enduring. The plot build up and character background was quite detailed and excellent. I especially enjoyed the relationship between Sam and his teenage daughter Erin. The sub plots with Commander Lawrence on the Navy submarine and the Marine squad in Afghanistan were also very well done. The problem I have is with the rushed ending. Not how it was written, I actually liked the ending, but the fact that it felt rushed. I think O’Brien could have managed a sequel from what he had going, but evidently grew tired of the story or ran out of gas. It’s a shame; it could have been even better.

Loved it! Another fantastic tale leaves me looking for book2. John OBrien is a genius

What an incredible story!! It had me sucked in from the very fittest second. The reality of the story scared the crap out of me, but I loved every minute!!

great concept would have never have thought of it.....absolutely loved it and the narration was on point....

Different take on the dead

The storyline is interesting, a different take on the living dead. Listening more for the story than the narrator. The narrator did not have the ability to get the listener to get with the characters of the book.