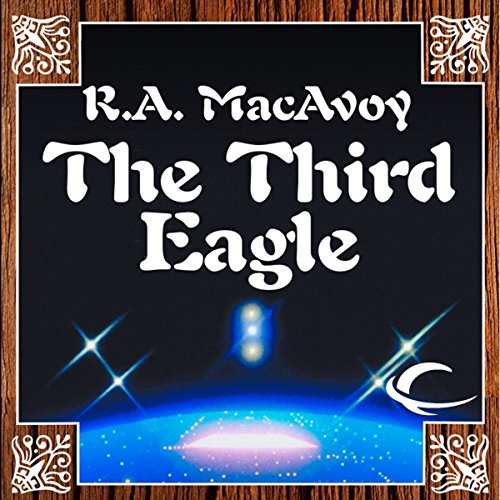 By: R. A. MacAvoy
Narrated by: Clinton Wade

When the warrior Wanbli came of age, he cast his lot among the stars and left the world where he’d been born. Left it, he thought, forever. His odyssey led him to one ship, then another, and to another still. It brought him face to face with the far-flung members of the universe’s Seven Sentient peoples. And, finally, it brought him to the colony ship Commitment. There, Wanbli learned the true purpose of his life - a mission so vital that it required risking the lives of everyone on the ship and the future of his home world.

His mission meant returning to that world…but only if he could survive the deadly machinations of those who sought to stop him.

What listeners say about The Third Eagle

At first this book seems to be a fantasy, about a warrior of a privileged and constrained warrior class in a pre-tech culture. We quickly learn, though, that Wanbli, while a member of a warrior class, and one of the few to earn the cherished third eagle feather tattoo, is far in our future. His world is not primitive, but it is poor. His career options are basically limited to being a bodyguard for the same man his mother guarded, and who may or may not be his father. And while he's very, very good at it--witness his third eagle feather tattoo--he does not find the satisfaction and pride in it that he knows he's supposed to.

On the first day he's legally able to, he leaves his employer, heads for the city, and books passage offworld. His goal is to reach what is, for that age, the center of what is effectively their motion picture industry. He's going to be an actor.

Along the way, first on one ship, then on another, then on the world of the movie industry, working bit parts, he meets people and learns things that shake many of his core assumptions--including one of the core assumptions his planet relies on. Decades ago, his planet contracted for a space station which would make their world much less poor, by tying them in much more efficiently to the interstellar trade routes. They've been making regular payments ever since, awaiting the day when they are paid up and their station will be delivered. What they don't know, and Wanbli learns, is that the company they contracted with went bankrupt, and was sold to another company that, it turns out, is not legally obligated to deliver their station.

In the course of trying to do so, he discovers a much bigger outrage, one that is causing deaths--and that might, paradoxically, contain the solution to his own world's problem.

That is, assuming he can get everyone involved, many of whom now want to kill him, to see things his way.

MacAvoy does a lovely job developing the characters and making us care, as well as making this fictional universe feel real and lived in. For those who remember them, there are hints that this may be the same universe that Alexei Panshin's Anthony Villiers novels are set in. That's just an added bit of pleasure for those who do remember them, though, and not at all necessary to following and enjoying the story.

This is one of the few SF novels I quit listening before reaching the end... when I reached the middle despite falling asleep for five times and still nothing interesting or significant had happened, I said, "That's it."