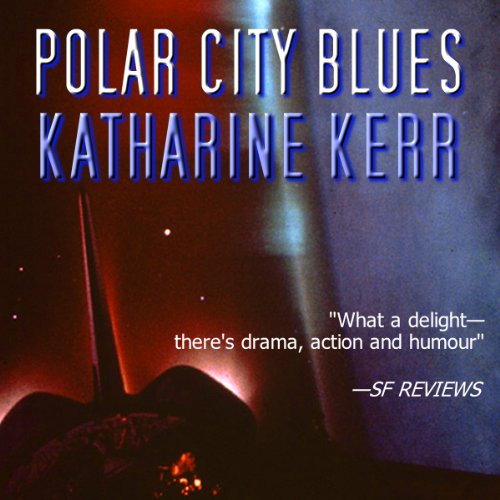 James Patrick Cronin gives a straightforward performance of the science fiction novel Polar City Blues by Katharine Kerr. His clear voice is well suited to the descriptive prose. Polar City, which has a seedy underbelly, is the capital of a planet called Hagar. Humans and aliens coexist, but there are politics at play between the Interstellar Confederation and the Coreward Alliance. The conflict ramps up when a Confederation alien is found dead in a public place. Enter police chief Al Bates, who must race to solve the case with the help of navy officer Bobbie Lacey.

In Polar City - the capital of Hagar, one of the planets in the forlorn Star Republic - a human-dominated entity is caught in the power politics between the enormous Interstellar Confederation and the Coreward Alliance. The leaders of these entities keep their alien eyes on the Republic in the hopes of one day adding its territory to theirs. When an alien member of the Confederation is found murdered in Hagar's public square, the situation turns dangerous fast. To solve the case, Police Chief Al Bates must depend on an unlikely ally, cashiered Navy officer Bobbie Lacey, the only sapient on planet who knows what goes on in the ghettos and underworlds of Polar City.

Polar City Blues by Katherine Kerr is an ambitious attempt to render the traditional "film noir" detective tale in a sci-fi format. Basically, the planet where the actions takes place lies at the juncture of Earth limits alongside two alien races. Earth is clearly the weakest of the group and the frontier / inner city environs is coupled with an understaffed and under-resourced Earth infrastructure. The murder of a diplomatically tied alien launches the tale and the local police chief (Bates) along with a street wise ex-military lady (Lacey) gradually piece together the clues while trying to prevent galactic warfare.

The sci-fi elements are limited to aliens along with flying cars, extra-terrestrial bacteria, and certain individuals with psionic abilities. There's a bit of romance and unrequited love thrown in for good measure. Sadly, Bates who manages to deftly handle alien interactions and eventually saves the day, receives minimal attention throughout the story resulting in a lack of character identification. The attempt to parallel the characters and situations to a traditional earth-side tales is overdone and the baseball fascination seems a bit too much.

The narration is passable, but the various voices lack clear definition.