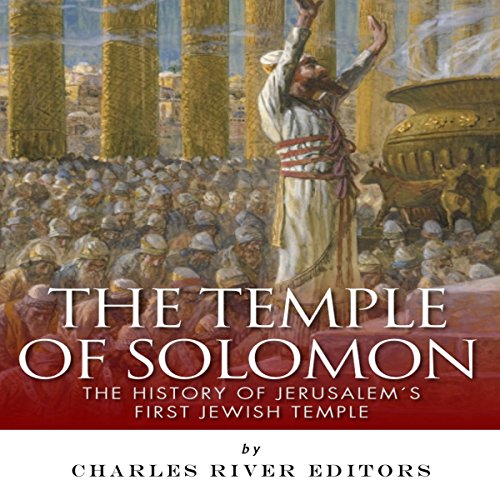 The Temple of Solomon: The History of Jerusalem's First Jewish Temple

By: Charles River Editors
Narrated by: Winston Strobridge
Try for £0.00

"In the 480th year after the Israelites came out of Egypt, in the fourth year of Solomon's reign over Israel, in the month of Ziv, the second month, he began to build the temple of the Lord." (1 Kings 6:1)

"In the year that king Uzziah died. I saw the Lord sitting upon a throne high and lifted up, and his train filled the hekhal (sanctuary)." (Isaiah 6:1)

There was not any one entity more central to the Yahwistic Judean religion during the monarchy than the temple of Solomon. It symbolized the presence of YHWH in the nation, as well as his enduring protection of the nation and the Davidic royal throne. Judean worshippers directed their prayers toward the Solomonic temple, and eventually, the Judean prophets and theologians declared that this was the only legitimate location where priests could perform sacrifices and other religious rites for YHWH. Its significance can be seen most clearly in the dramatic cognitive dissonance experienced by the Judeans in Babylonian captivity after the destruction of the temple, which had been so central to their religious conception that they had great difficulty reconciling its destruction with their continued belief in YHWH.

The Temple and the Biblical descriptions of it have fascinated people for centuries and led to all kinds of conjecture and imagination. In addition to countless works of art, Isaac Newton tried to make a model of it in his writings, and he wrote about the temple extensively. Even Freemasons give a nod to Solomon's Temple by calling their meeting places temples as well. That said, the Temple remains an enduring mystery due to conflicting accounts and descriptions of it in the Bible, and some scholars have even put forth theories that the structure was not originally designed to serve religious purposes in the first place.

What listeners say about The Temple of Solomon: The History of Jerusalem's First Jewish Temple

Hard to understand narrator due to tone of voice blending words together, but interesting content. This is strictly from a historical view, not theological view, so it makes sense that there is confusion if they think the temple in Ezekiel is exactly the same as Solomon's when describing the measurements. His temple and Ezekiel's description are all actually both pointing forward as a picture of God's dwelling place ... and, like Ezekiel says, show them the description of this temple so they will repent ... etc..