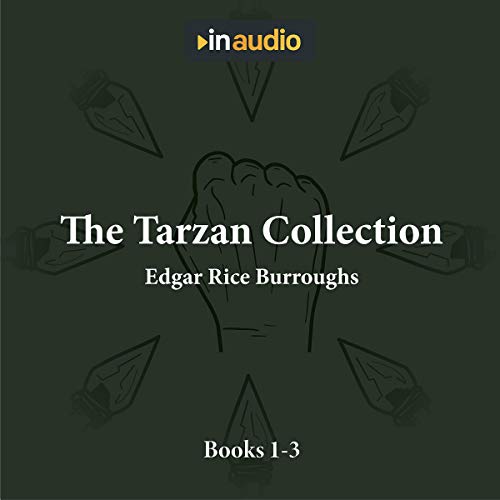 By: Edgar Rice Burroughs
Narrated by: Jon Waters
Try for £0.00

Join in on one of the world’s most beloved jungle adventures in The Tarzan Collection. This collection includes the first three books of Edgar Rice Burrough’s Tarzan novels: Tarzan of the Apes, The Return of Tarzan, and The Beasts of Tarzan. All three novels follow stages of Tarzan’s life, from his childhood among the apes to his adulthood adjusting to a new life and adventures among civilized society.

Tarzan of the Apes - The story of Tarzan begins with a baby to orphaned and left in a jungle who is adopted by apes. The apes raise him as one of their own, and he learns to swing through the trees on vines and talk to the other inhabitants of the jungle, but Tarzan always knows that he is different. When he is an adult, his already-strange world is flipped upside down by the arrival of other humans in his jungle. This beloved classic follow’s Tarzan’s life and adventures as he comes grows up in the wild and comes to terms with his humanity among the apes.

The Return of Tarzan - After the events of the first book, Tarzan is living among humans, but facing difficulties fitting in and finding his purpose among them, especially after giving up on marrying Jane Porter for a time. He decides to return to the jungle, where he hears rumors about a lost city of gold hiding among the trees and sets off with newfound friends to pursue the treasure. The second volume of Tarzan’s adventures take him all around the jungle through perilous situations as he contends with his humanity, his desire to be with his love, and his place among the jungle society.

The Beasts of Tarzan - The third novel picks up a year after the end of The Return of Tarzan, and finds Tarzan and Jane together with a son, beginning to build a life together in Africa. But of course, Tarzan doesn’t stay out of danger for long, and soon his previous enemies are back to haunt him and kidnap his son. As the villains carry out their evil plan, Tarzan has to rely on his jungle upbringing and team up with the beasts of the jungle to rescue his beloved family.

What listeners say about The Tarzan Collection

This recording of the first three Tarzan books is of good quality, but someone placed the books on it in REVERSE order. We begin with the Beasts of Tarzan. Then The Return of Tarzan. And last of all, Tarzan of the Apes. Good grief.

Classic Story with some Racial/Sexist Comments

This audiobook contains three books: “Tarzan of the Apes”, “The Return of Tarzan”, and “The Beasts of Tarzan”.
Tarzan is a classic novel written by Edgar Rice Burroughs in 1912. Its a fun book, but there are some racial and sexist comments that are a bit shocking for a modern reader. I think its worth reading in spite of these things (At least for an adult. If a child was reading this, I would want to discuss certain parts with them as they read. There is no sexual content, but the racial and sexist comments are worth discussing).

The story is a fun read, and it seemed to be very well written (ignoring the racial and sexist comments for the time being). The story is basically focused on the “thought experiment” of “nature vs. nurture”. The premise is what happens if you take an English lord whose family was bread for generations to be leaders, warriors and gentlemen, and if you then have him raised by apes in the jungle (with access to his Lord father’s books which he learns to read). Will he be a beast or man, and how much will his “breeding/pedigree” affect things (if at all)?

Racial, Sexist and Historical 1912 Views:
The story definitely has some racist and sexist comments. I couldn’t tell while reading how much the racist and sexist comments were the author’s, how much was meant to be representative of the common person of the 1912 time, and how much of the views were a result of Tarzan’s unique upbringing (created from his own experiences alone). There are a number of discussions of this online which are probably better and more thorough than anything I could say. I’ve only read the first few books in the series, and I am not an expert on Edgar R. Burroughs. So, I would highly recommend reading those online discussions and articles. Be aware that Tarzan’s views seem to grow and mature over the course of the first few books. He is forced to confront some of his views throughout the books.

From what I could tell, some of the racist and sexist comments are a direct result of the “thought experiment”. For example, the first other people Tarzan meets are a village of cruel black cannibals (Tarzan seems to intrinsically believe cannibalism is wrong, and he doesn’t believe in killing cruelly. He only kills for food or to avenge, and he doesn’t do so cruelly.). As a result, for the first part of the first book, he doesn’t have a great view of black people. From what I could tell, this view changes a bit by the second part of the book. Tarzan, based on his father’s books which show white people having a rather sophisticated culture initially assumes that white people must somehow be better (better then the only black people he knows – the black cannibals). Then, the first white people he sees are some pirates killing their own captain, and he is extremely un-impressed with them as well (making him question his assumptions that white people are better). He then starts to believe that possibly the animals of the jungle are morally better than people as a result (only killing for food). He is somewhat encouraged to see Jane, her father and friends since they seem like better people and more humane people to him. Interestingly enough, in the second book he ends up back in the jungle, and he meets another village of black people who aren’t cannibals, and he comes to love and care for them enough to join their village for a time and see them as his people. So, by this point in the story, it could be argued that Tarzan isn’t racist anymore (maybe??? If so, that would be a good arc of character development and growth.). Tarzan definitely does a lot growing as a person over the course of the books (He is definitely not a static character). The books definitely imply at some point that Tarzan’s breading/pedigree positively affect him, and so the author definitely leans a bit more towards the “nature” side, but he still gives points to the kind female ape who “nurtured” him. The books also discuss that “the man is supposed to protect the woman”, and many people may not like this, but in a jungle environment the reader is forced to consider where this type of viewpoint may have come from historically. However, in a counter to this, the books also show that most “modern” men (other then Tarzan) are pretty helpless as well in the jungle environment.

In Conclusion:
Overall, if you can ignore the occasional racial/sexist comments (Remembering that the book was written in 1912 – Not that that excuses racism and sexism because it doesn’t.), I think its a fun story worth reading. It will definitely give some insight into the “common views” of the early 1900s. I think the Tarzan books are a safe way to explore some of these “views”, and learn to better understand why they think what they think (while not necessary agreeing with their views). If you go into the books as an interesting “thought experiment”, and fun story, I think you will enjoy the experience, and definitely have some things to think about afterwards.

love collection, want more however books are performed in wrong order, would love to hear and know more

Good intro to Tarzan with some issues

I enjoyed the convince of three books in one but the series plays from book 3 to book 1, and has some strange jumps with the audio repeating itself. The jumps in audio could just be my device and connection. The having books in reverse order would have been bad if I hadn't know some of the stories before hand.

Don’t buy until they fix

I saw this 3 book bundle of a series that I liked and have listened to several times so I picked it up. Unfortunately I didn’t check the reviews beforehand, else I might not have done so. First, the books are not in order and I had to skip to chapter 53 to start the 1st book. 2nd, there was a sound that kept occurring, sounded like an cartoon acorn knocking against the ground, before the book would skip back a few seconds and repeat itself. This occurred at random during the ENTIRE first book and I’m assuming that it’s present through the whole trilogy.
Personally I would have not purchased this iteration of the series if I knew this before hand.

Listened to them in reverse and….

Well I just finished listening to the books in reverse order (3,2,1) and well…. I’m elated as the context of scenarios in its adventurous nature never required knowledge of the origin of plot. It added an heir of mystery to the ordeal, and greatly played into an appreciation for the seemingly mysterious origin. Had I know. They were not meant to be in reverse order I wouldn’t have done so but I did not realize this was not the authors intention. Actually laughing at myself, all the while it was incredibly enjoyable and resulted in the ending of what was originally the first(3rd here) being an epic climax. There’s also mistakes made by the narrator that it rewinds after to then say it correctly and I don’t know why they did not just edit it out. All in all very good and point being besides these two things on editing the narrator was superb in voice acting and pace.

books out of order

love Burroughs and audible but these three books are out of order. the audio starts with book 3 and ends with book 1. the narrator has a nice voice and cadence. would recommend getting a different version that plays in order.

I first discovered these books of my dad's in my grandparent's attic when I was around 11 in 1962. Tarzan and John Carter quickly supplanted the Hardy Boys in my life. Throughout my life I have returned to these books every 15-20 years for the pure escape. Yes the books demonstrate the racism and sexism of the time, but reading many books from that period requires an understanding and filter.

For the escape the books are once again worth my time. There's is the additional bonus of the excellent performance that brings to life the story's dialogue.

Now, as others have stated, the books are recorded in reverse order, and contain an occasional phrase repeat when the performer is correcting himself. It is seldom and not distracting. Neither should have happened.