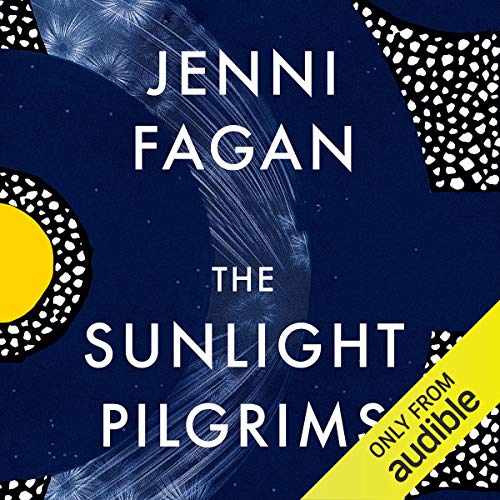 By: Jenni Fagan
Narrated by: Steven Cree
Try for £0.00

Set in a Scottish caravan park during a freak winter - it is snowing in Jerusalem, the Thames is overflowing, and an iceberg separated from the Fjords in Norway is expected to arrive off the coast of Scotland - The Sunlight Pilgrims tells the story of a small Scottish community living through what people have begun to think is the end of times. Bodies are found frozen in the street with their eyes open; midst economic collapse, schooling and health care are run primarily on a voluntary basis.

Dylan, a refugee from panic-stricken London who is grieving for his mother and his grandmother, arrives in the caravan park in the middle of the night - to begin his life anew. Under the lights of the aurora borealis, he is drawn to his neighbour Constance, a woman who is known for having two lovers; her 11-year-old daughter, Stella, who is struggling to navigate changes in her own life; and elderly Barnacle, so crippled that he walks facing the earth.

But as the temperature drops, daily life carries on: people get out of bed, they make a cup of tea, they fall in love, they complicate.

The Sunlight Pilgrims, the thrilling follow-up to The Panopticon, is a humane, sad, funny, odd and beautiful novel about absence, about the unknowability of mothers. It is a story about people in extreme circumstances finding one another - and finding themselves.

"[A] vivid and tender coming-of-age story set at the end of the world.... For all its coldness and darkness, The Sunlight Pilgrims is ultimately a hopeful book - and for a novel that describes the end of the world, that is quite a feat." (Kirsty Logan, Guardian)
"The Sunlight Pilgrims evokes a chillingly plausible near-future...intimately imagined." (Paraic O'Donnell, The Spectator)
"Fagan's vivid, poetic-prose style injects the book with energy. She writes at the pace of thought, sentences like gunfire.... She has a poet's affection for precision and image." (Sophie Elmhirst, Financial Times)

What listeners say about The Sunlight Pilgrims

Near future and the snow won’t stop

Wish the story had concentrated on a couple of the themes . Climate change, dealing with death, endless family relationship issues and a teenage sex change were too much to cover!

Was a good listen though. Narrator did well with the accents and I enjoyed his dialogue.

I am actually torn about this book.

On one hand, the writing is beautiful, no question about it. It's introspective, meditative, poetic. The characters are fascinating and lovingly drawn.
The atmosphere reminded me of The Age of Miracles by Karen Thompson Walker.

On the other hand, I did not like how the narration jumped through the timeline without rhyme or reason, and I especially did not like the ending.

It was like: all the build-up, and the whole thing stopped mid sentence. If I was Sheldon Cooper it would have driven me nuts.

Dylan, Constance and Stella are extremely charismatic. I especially adored Stella, a transgender teen in a small community whose dreams and plans are derailed by the very inconvenient apocalypse.

Constance who glued Dylan and Stella together, was an enigmatic woman but I couldn't understand what drove her tumultuous relationships. What such an interesting woman did with two very ordinary men ( who are actually hardly playing any roles in this book)?

Dylan with his internal strength and calm facade grounded Constance and her daughter, and I loved how drawn he was to them. It felt like fate to me.

Their mutual neighbor was a sweetheart as well, and I loved how lively and believable all his grumpy dialogues were. I could absolutely imagine this happening in real life.

Steven Cree, the narrator, did a decent job, and for me the book flowed really well.

Overall, despite my disappointment with the ending, it's a recommended read. Purely for its gorgeous poetic language. However, I would hesitate to pick up this author again because I hate feeling cheated by my own expectations. *grins* It's up to you to risk it or not.