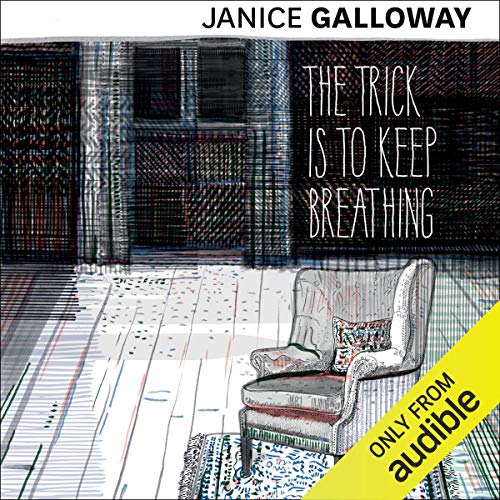 The Trick Is to Keep Breathing

By: Janice Galloway
Narrated by: Siobhan Redman
Try for £0.00

The problems of everyday living accumulate and begin to torture Joy, who blames her problems not on her work or on the accidental drowning of her illicit lover but on herself.

While painful and deeply serious, this audiobook holds great warmth and energy: it's the wit and irony found in moments of despair that prove to be Joy's salvation.

"A real achievement; its dialogue sparks and its voice is true. For Janice Galloway the trick is simply to keep writing." ( Scotsman)
"An account from the inside of a mind cracking up...its writing is as taut as a bowstring. From brilliant title to closing injunction, it hums with intelligence, clarity, wit; and, its heroine's struggle for order and meaning seduces our minds, exposes how close we all of us are to insanity. Joy, as Galloway's heroine reluctantly lets us know that she's called, is simply that dangerous step or two nearer the edge." ( Listener)
"Claustrophobic but extraordinary." ( Sunday Times)

What listeners say about The Trick Is to Keep Breathing

I read this before a while ago. Enjoyed it even more with this excellent reading.

Loved this book narrated beautifully by Siobhan Redman. Takes place in Glasgow, my home town. which added to the interest for me.

what the fuck am i listening to

also titled Ramblings of a mad woman, 2 hours in and still no clue what its about.

Definitely would recommend this book. Brilliantly written and Siobhan Redman reads it so well. Heart wrenching.

Enjoy is scarcely the word...

Where does The Trick Is to Keep Breathing rank among all the audiobooks you’ve listened to so far?

There is really only one character, the central, much troubled narrator. Many others appear, but all are inflected by her. Despite the central character's depression (that's surely not a spoiler) there are great touches of cynicism which any well person would also come up with. Cynicism is sometimes the only suitable response to some behaviours, suggestions etc.

The content of the book is so dark that I feel 'enjoy' is not the word. Some scenes are wonderfully written and narrated such as the 'memorial service' scene - you could tell something unfortunate was building - so much more dramatic to be hinted at than stated.

...and for that you need your head to be above the water...

Siobhan Redmond was the perfect choice for this. Although the story is not exclusively Scottish, the character is and Redmond would have been my choice. If you know the book and are wondering how the 'marginalia' are handled, I think you'll be as impressed as I was. If you didn't know they were there, you'd still 'get' what was happening.

Very depressing insight into a life of someone going through a horrible point in life. This person doesnt seem to be trying to make any changes in her life for the better. A very real insight.

Would you listen to The Trick Is to Keep Breathing again? Why?

No, although I enjoyed the book, listening to it once was enough.

it was a very clever book - it got into your head

Which character – as performed by Siobhan Redman – was your favourite?

I have an understanding of what the main charactor has gone through, so it was very intense at times.

I couldn't tolerate the accent, tone or style of the narrator. I tried to keep going, but the story was plain and uneventful.
If you see my reviews I am very enthusiastic when reviewing a good book, I frequently give 4-5 stars if I have thoroughly enjoyed a book, I never give 4-5 star reviews unless I feel the book, author and narrator are deserving.
So it is with regret when I review and give 2-3 stars, rarely do I award 1....but I regret wasting my money buying this book. I've seen 3 other titles by this author and played the clip, they sound the same so shall be avoiding them.
I have many awesome audiobooks that I frequently replay, same as rereading good books, they stay with you, you love the characters so much, inevitability sequels are hoped for.
Thankfully there are many excellent books awaiting discovery!

Jumbled and poor story line which I found very boring. Persevered in the hope that the point of the book would be revealed but was very disappointed. Don't usually write these reviews but found this a complete waste of money 😕

The Trick Is To Keep Reading

I would recommend it to some friends--it's not an easy book to get into as it's narrative jumps around quite a bit. If you keep at it, eventually you kind of get into the flow. Based on some reviews I read, I wonder if it would work better as a &quot;regular&quot; book instead of an audiobook, as I understand there are some visual clues in the book (italics, other changes in type) that indicate flashbacks or other changes in narration. It might be easier to track in text. That's not to say I didn't think the reader did a fine job, but some things can't be replicated in audiobook form.

A tough but intriguing and heartfelt story, beautifully read. Gives the listener a lot to think about.

The work of a great writer. Pure poetry. Siobhan Redmond's reading/interpretation/performance is nothing short of brilliant.