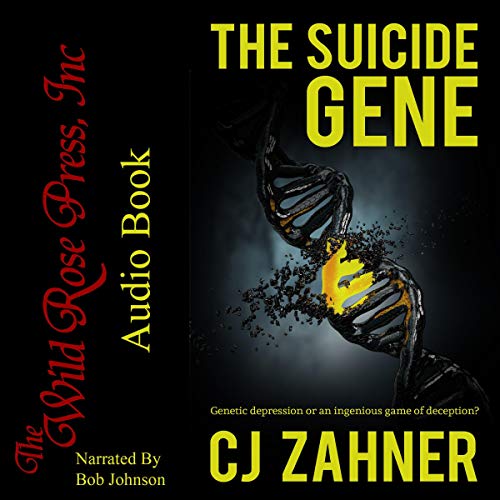 She thought they were her siblings. By the time she realized they weren’t, one of them was dead.

Doctor Emma Kerr had no right counseling them. Adopted and her birth records lost, she believed she was born a McKinney. Her face, intelligence, and depression resembled theirs. For years people mistook her for their sister. So she devised a plan. What begins as a scheme to counsel the McKinney family and determine if they are blood relatives quickly causes Emma to wonder if she had truly done the manipulating. Is someone following her?

Now Emma clamors to escape the McKinney world of domination and deception. Is she Mathew McKinney’s sister? She can’t be. Is he in love with her? He can’t be. Then how do he and his sisters know more about her than she knows herself? This is a game to them. Is the game suicide? Or murder?

What listeners say about The Suicide Gene

"Shuffle, cut, burn."
It begins with a funeral, then jumps back to six months before the death, working forward week by week until that start point in time is reached again, and the story continues.

The four adult McKinney siblings, Matthew, Melanie, and twins Mary and Minnie, seem never to have recovered from their mother's suicide some years before. Dr.Emma Kerr is persuaded to take on the whole family as clients, despite her vague feeling that she could in some way be related to them, given that she'd looked a bit like them when at school. Not any more, though, and it seemed very unlikely: she had been an adopted baby with no records prior to the adoption and no real reasons to justify her suspicions.
The McKinneys are strange, slightly reticent individuals, all refusing medication. The Suicide Gene tells of the difficulties occurring in Emma's life - a pending divorce, a stalker, a growing romance, replacing a colleague in her small firm, and, later, litigation - at the same time as she reviews her sessions with the four adults she believes to be suffering from a form of post traumatic stress. but as she does this, another, new sinister mystery emerges from their background.
All of which sounds rather bland but is, in fact, quite riveting reading.

The tensions which build in this psychological mystery are further enhanced by the gently melodic narration by Bob Johnson, whose timing is text perfect, well articulated and entoned, and individual characters each have their own voices. The characterisation by author, C.J.Zahner, is good, building slowly as the reader gets to know the characters, and author and narrator together create a complete picture.

My thanks to the rights holder of The Suicide Gene, who, at my request, freely gifted me a complimentary copy, via Audiobook Boom. I very much enjoyed this book with its contrasting characters and the slowly evolving mystery and conclusion. Plus it raises some interesting ideas. Recommended.

A complimentary audio was provided in exchange for an honest review. This review might contain spoilers.

I like a good mystery/thriller/suspense story and the blurb for The Suicide Gene really got my attention - it made me think of stories like Dan Brown or Michael Crichton. Unfortunately the writing style was different than those authors and I found the story outline to be hard to follow at times. There was a lot to keep track of, so many "M" names and background information mixed with what felt like unnecessary minutia details about Emma's life and her mother's/family. And then the twins (Minnie & Mary) kept providing a lot of history about long dead historical people and there was just a lot to follow. The playback to Emma's transcripts was rather annoying with the constant lead in to who is speaking - Emma:...; Minnie:...; etc. It would have been better (for me anyway) if the sessions could have been shown in real time and not in a sort of flashback.

However, this was still an interesting story, and makes you think about genetics, heredity and upbringing. The twins are crazy, and I didn't like them. Matt (the twins brother) was a mystery and I knew there was something about him and his history that was important. Emma was a roller coaster and I could never predict what would be going on with her from one day to the next, especially with concerns about her mother and father. Add in Emma's struggles with her husband Josh, and then add Giff to the equation...a lot of drama to work through there.

But I was still interested enough to figure out how this story was going to play out that I stuck with it and wow. Discovering the FULL history behind Emma, the twins and Matt, their parents and grandmother - OMG! Sick, just some very bad stuff and it's no wonder the kids turned out the way they did. Somehow Matt is the savior in this story, which yes was nice and sweet, but his hands aren't clean either.

Seeing Emma in the epilogue a year-ish after all this went down was nice - she is finally happy and free, pregnant and in love. Spoiler* [She discovers she is pregnant with twins, which freaks her out in a BIG way. But with Giff's help, is able to deal with it, and realizes that her girls will be different because she loves them and will raise them right. The final scene of the book gives every indication that (in the year 2030) one of Emma's twin girls is suffering from depression and suicidal thoughts, and is walking on literal think ice debating with herself about ending her suffering. A man jogging by calls out and brings the woman back to land. I think this is Matt and that he has not stopped looking out for Emma (his sister) or her family. It's never confirmed who the woman is, or who the man is, but who else could they be? (hide spoiler)]

Overall this was a hard book to get thru because of all the details (that felt like way too much info) but thought provoking and I am glad I read it.

As for the narration, I thoroughly enjoyed Bob Johnson's voice and storytelling ability. I've not listened to him before but I would listen to him again. His voice was actually (ironically) very similar to my ear to that of some of Dan Brown's audios. I am failing to remember which book of his that is similar (there have been a few) but regardless, the narrators voice was easy to listen to and a familiar sound which helped me get through some of the story that was hard to hear.

I must admit that I thought this was going to be an urban fantasy with a mystery but I was proved wrong from the start. However, I wanted to see what would happen and the beginning does hook you but after this I found it to be slow going. Unfortunately, due to this I ended up listening to other audiobooks before I could pick it up again. Towards the end was a lot better because that is when we find out things. I must say I was surprised and was not expecting it.
The author, I believe is talented and it was not a bad book. Would I still recommend it? I would. If you can take the slow build up then it is for you

A shrink in need of a shrink

This story is the kind that grows in you. It started to grab my attention (specially in the listening format) with the reading of the transcripts of the shrink consults of the McKinney family. The narrator does a great job in those scenes that are not that easy to give live to in an interesting and believable way. The silences and laughs are perfect, as are are most of the characters voices and personalities.
The story is about a shrink (adopted, born from unknown parents) that thinks is treating her (lost) brothers that have suicide tendencies. The book starts a bit confusing and with a slow pace, but is definitively worth the wait as the story picks up speed, the thriller finally shows itself and the ending is full of surprises, even when we thing it will have a predictable one.

A burning psychological mystery that starts with just a handful of pieces about a family after suicide takes another member. As the story progresses, we are put into the middle of this family, to see the way they think and feel about each of the other members. As more therapy sessions are revealed, the pieces are slowly put together revealing a twist of an ending.

Emma is a psychiatrist who has only been practicing for 2 years. She was adopted by birth by a wonderful family, but struggles with identity and psychological issues. She has had a lifelong obsession with “twin genes” and “suicide genes” Her birth and adoption records have mysteriously disappeared and she has often in the past been mistaken for a McKinney. Her belief that she may be a sibling intensifies when she begins to council the McKinneys, whose family has a history of suicide and twins. I loved everything about this book, the storyline, the characters, the intrigue and the little bit of romance. Bob Johnson has done, as usual, a fantastic job with the narration. I was given this free review copy audiobook at my request and have voluntarily left this review.

To be honest, the title had somewhat put me off. Who wants to read depressing stuff? But a friend had assured me I'd enjoy this book and he was totally right! What we have, although clinical discussions of depression slide in here and there (hey, the protagonist is a shrink!), is a bit of a thriller, a cold case or two, a mystery and a romance all rolled into one, with some interesting twists. Lovingly narrated by Bob Johnson, I kept finding excuses to listen when, perhaps, I should have been otherwise occupied (just one more chapter and then I'll go to sleep).