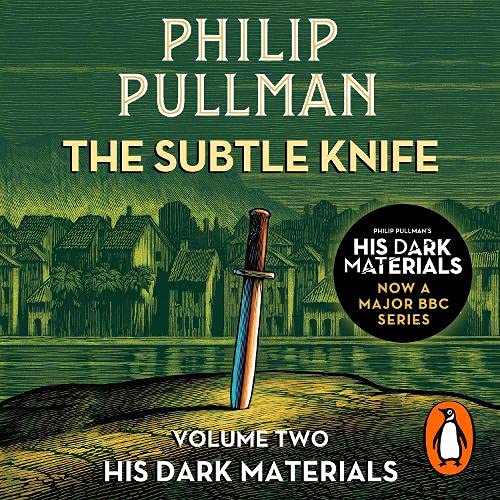 From the world of Philip Pullman's His Dark Materials - now a major critically acclaimed BBC series.

She had asked: what is he? A friend or an enemy?
The alethiometer answered: he is a murderer.
When she saw the answer, she relaxed at once.

Lyra finds herself in a shimmering, haunted otherworld - Cittàgazze, where soul-eating Spectres stalk the streets and wingbeats of distant angels sound against the sky.

But she is not without allies: 12-year-old Will Parry, fleeing for his life after taking another's, has also stumbled into this strange new realm.

On a perilous journey from world to world, Lyra and Will uncover a deadly secret: an object of extraordinary and devastating power.

And with every step, they move closer to an even greater threat - and the shattering truth of their own destiny.

Read by Philip Pullman and a full cast of narrators.

What listeners say about The Subtle Knife

Following the first book, this was also spectacularly narrated. Love the music and the whole storyline.

A masterpiece as usual narrated beautifully as usual excellent story excellent characters in fact excellent all round. Thank Philip Pullman

It gets better and better.

It gets better and better. I don't need to say more than that do I.