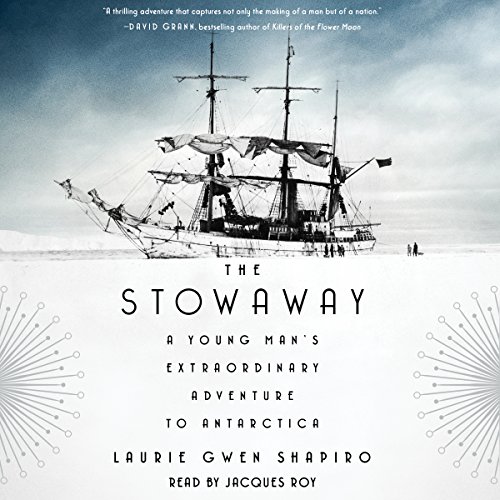 The spectacular true story of a scrappy teenager from New York's Lower East Side who stowed away on the Roaring Twenties' most remarkable feat of science and daring: an expedition to Antarctica.

It was 1928: a time of illicit booze, of Gatsby and Babe Ruth, of freewheeling fun. The Great War was over, and American optimism was higher than the stock market. What better moment to launch an expedition to Antarctica, the planet's final frontier? This was the moon landing before the 1960s. Everyone wanted to join the adventure. Rockefellers and Vanderbilts begged to be taken along as mess boys, and newspapers across the globe covered the planning's every stage.

The night before the expedition's flagship launched, Billy Gawronski - a skinny, first-generation New York City high schooler desperate to escape a dreary future in the family upholstery business - jumped into the Hudson River and snuck aboard.

Could he get away with it?

From the grimy streets of New York's Lower East Side to the rowdy dance halls of sultry Francophone Tahiti, all the way to Antarctica's blinding white and deadly freeze, Laurie Gwen Shapiro's The Stowaway takes you on the unforgettable voyage of a gutsy young stowaway who became an international celebrity, a mascot for an up-by-your-bootstraps age.

"Shapiro has rescued from oblivion a wondrous tale of exploration. The Stowaway is a thrilling adventure that captures not only the making of a man but of a nation." (David Grann, best-selling author of Killers of the Flower Moon)
" The Stowaway proves that fact is stranger and funnier and more amazing than fiction. Laurie Gwen Shapiro artfully draws the reader into the tale of Billy Gawronski, a dreamer and adventurer. Through the wild story of his travels to Antarctica, we see history come vividly to life." (Susan Orlean, best-selling author of Rin Tin Tin)
"Laurie Gwen Shapiro wrote The Stowaway like a Jack London novel: with a sense of adventure, wonderful detail, a lineup of intriguing characters, and above all a great story. This is the best of nonfiction." (Mark Kurlansky, best-selling author of Paper)

What listeners say about The Stowaway

A riveting and touching tale of adventure for all!

Where does The Stowaway rank among all the audiobooks you’ve listened to so far?

I'm an avid listener, and this is definitely in my top five audiobooks, if not #1.

I didn't expect to cry, but I did. It's a very fun and spunky story about a plucky adventurous kid who will stop at nothing to meet his hero and fulfill his outlandish dream. But it's a human story, sweet and warm, and the author did good enough research to create actual people and family drama, rather than just the neat plot of sailing to Antarctica.

What does Jacques Roy bring to the story that you wouldn’t experience if you just read the book?

I read the book on my own before having Jacques Roy read it to me: he has a voice that is round and full of drama, pushing a ton of weight into the words. He also switched voices for different characters in a way that was pleasing. This book features a lot of people with different accents, and when he slipped into their voices it was not at all demeaning. This is the type of story I wish I had a grandfather to tell me by the fire. For lack of a grandfather, Jacques Roy does a fine job.

Yes. It's not a terribly long book, and it's so exciting that you know there won't be a moment to pause to go do whatever annoying life things.

I just really love this book. It makes me homesick for a time in American history I previously had never heard of. Kudos to the author!

A Nice Little Story About A Nice Young Man...

In the Afterword, Laurie Gwen Shapiro states that Billy Gawronski's story could be something so outlandish that a novelist could've written it. It has it all: a young man's plucky relentlessness, the roaring 20s, Antarctica, etc. And it's true it has all that -but- Shapiro wrote it, not a novelist, and she takes all the fun out of it. In her hands, The Stowaway is just a nice story about a good kid.
Don't expect adventure and exploration. Billy doesn't make the cut and has to sail home while the good stuff takes place. Then the book simply becomes a story of him doing a few interviews, kicking around, and asking his parents for money.
Don't get me wrong. Gawronski is a fine young man, it's just that the story drags and doesn't hit the highs it could've hit. I'm glad that adventure got in his blood and, after a sorry marriage, he went on to serve his country. But The Stowaway isn't proclaimed to be about that, so just expect that in the Epilogue.
Jacques Roy elevates it a bit with a fine performance, good with tucking some excitement into where the story doesn't have much, and he does a decent job with toned-down accents. So it was a decent enough listen.
I just expected what the publisher's summary set forth, and The Stowaway doesn't quite deliver on the adventure/exploration aspect.
Hmmm... Upon further review, the summary is a bit vague on all that, so perhaps I was mistaken in expecting more excitement... Most unfortunate...

The first part is fantastic. But then it changes into, ostensibly, a story about the Great Depression. The latter which is perhaps important, but very variable - in my opinion, poorly edited. I think though, as a book about the Antarctic, it speaks very little about the Antarctic. Finally the latter two thirds is more of a recital of events than a cohesive story

Great for an armchair traveler

I enjoyed the story and the history around it. The narrator was terrific and I found myself listening to certain parts several times because I liked the way the story was playing out. Treat yourself to this terrific true life story.

Story of someone who would have gone unknown

What did you love best about The Stowaway?

It is the true story of an 18 year old who stowaway on Admiral Byrd's first voyage to the arctic. The background second story Is about Byrd. More a promotor than an explorer such as the crew of Endurance.

Great story of how the courage and determination of a young man helped him meet his goals and set the stage for a long and memorable life.

Reads like a novel, but it’s all true. The author’s research is fascinating, and I didn’t want the story to end.

The narrator does a wonderful job, and even his attempt at a Polish accent is passable (Though he only does this briefly). Even the author notes were riveting (Though I wish she had read these herself, it was disconcerting having a male voice).

Truly a great story. Had me cheering and booing in the car. Had to repeatedly remind myself that it is non-fiction!

Don't Waste a Credit or Buy this audio book

What disappointed you about The Stowaway?

Very disappointing, read more like the social section in the New York Times, Sunday edition. Had nothing to do with the details of the expedition, just some tramp that decides to hitch a free ride. A total waste of one credit.

What was most disappointing about Laurie Gwen Shapiro’s story?

When I finished the book!