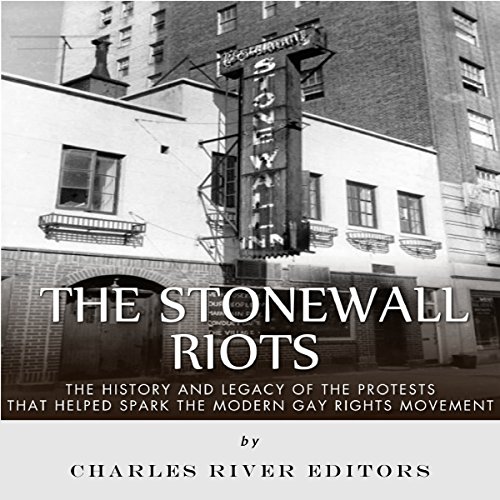 By: Charles River Editors
Narrated by: Dan Gallagher
Try for £0.00

In 1969, America was still undergoing plenty of social turmoil, much of it the result of sweeping changes made via the Civil Rights Movement and the Vietnam War, which helped spark the counterculture. Protests were prominent across the country, and one of the movements galvanized during this time was on behalf of the LGBT community, who were often subjected to discrimination in all facets of life. However, LGBT rights were naturally on the back burner for most Americans at the time, and it's safe to say few considered them until hearing about the Stonewall riots that took place at the end of June 1969 in New York City.

Given the discrimination, gay people tried to meet in secret gay bars, and it was common for police to try to bust up such gatherings, but on the night of June 28, the patrons at the Stonewall Inn had enough. As the police tried to line everybody in the bar up and identify them, the crowd hanging around the place began to swell, and tensions began to rise as there were increasing calls to challenge the propriety of the police action. As people sang "We Shall Overcome" and there were chants of "Gay Power," a scuffle eventually broke out, and the police resorted to anti-riot tactics to break up the crowd, injuring an untold number with bats and other objects. The next day, there were further riots, and in the coming days, as news of what happened spread, a gay rights movement began to sprout, consisting of more peaceful protest and pickets.

Eventually, the Stonewall riots became a rallying cry across the country for gay rights, and gay rights groups popped up in every state. There would be gay pride marches on the anniversary of the Stonewall riots to commemorate the event, and gay rights entered the mainstream and truly became part of the national debate. As historian Lillian Faderman put it, "The Stonewall Rebellion was crucial because it sounded the rally for that movement. It became an emblem of gay and lesbian power. By calling on the dramatic tactic of violent protest that was being used by other oppressed groups, the events at the Stonewall implied that homosexuals had as much reason to be disaffected as they."

What listeners say about The Stonewall Riots

it has been said that there are more different accounts of the stonewall riots than the number of people involved in the riots. i have read a lot of accounts and this seems very authentic.

Very simple and easy listening!
I have been reading many books on this topic and yet I learned some new things.
Narrator is a bit monotonous, but the story is very interesting and well explained.

Not bad. Too short.

I enjoyed this brief recollection of the Stonewall riots. I already knew about Stonewall through my own research. I was hoping this book had a few more nuggets of information.
Good read for those who know nothing about Stonewall and the history of LGBTQ political activism.