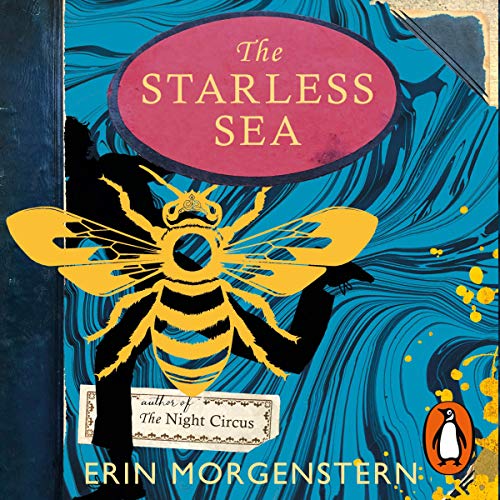 Random House presents the audiobook edition of The Starless Sea by Erin Morgenstern.

The magical new novel from the best-selling author of The Night Circus.

Zachary Ezra Rawlins is a graduate student in Vermont when he discovers a strange book hidden in the library stacks. As he turns the pages, entranced by tales of lovelorn prisoners, key collectors, and nameless acolytes, he reads something strange: a story from his own childhood. Bewildered by this inexplicable book and desperate to make sense of how his own life came to be recorded, Zachary uncovers a series of clues - a bee, a key and a sword - that lead him to a masquerade party in New York, to a secret club, and through a doorway to a subterranean library, hidden far below the surface of the earth.

What Zachary finds in this curious place is more than just a buried home for books and their guardians - it is a place of lost cities and seas, lovers who pass notes under doors and across time, and of stories whispered by the dead. Zachary learns of those who have sacrificed much to protect this realm, relinquishing their sight and their tongues to preserve this archive, and also those who are intent on its destruction.

Together with Mirabel, a fierce, pink-haired protector of the place, and Dorian, a handsome barefoot man with shifting alliances, Zachary travels the twisting tunnels, darkened stairwells, crowded ballrooms, and sweetly soaked shores of this magical world, discovering his purpose - in both the mysterious book and in his own life.

I’ve waited 9 years for this book, anticipating another novel as enchanting as The Night Circus. That being said, I dove into this book with high expectations and major worries it wouldn’t live up to Morgenstern’s debut. I didn’t need to worry. Drawn in as soon as the first words began, Erin managed to instantly transport me away from my life, worries, mundanities. She creates worlds in a way that it becomes real for you too.

The narrators were perfectly chosen. I worried that multiple narrators would spoil the flow for me, instead it added to the submersion of Erin’s stunning prose.

It you are contemplating buying this book, I simply can’t recommend it enough. No words I could ever produce would do it justice.

Jump. Jump in to this book, and the world it weaves around you. You won’t be sorry.

It just goes on and on. Beautiful but aimless.

It seems to be a beautiful story, beautifully told. I have listened to nearly 7 hours of it. But it does not seem to have a goal, purpose or plot. I have given up.

It's been a long wait since The Night Circus, but oh, so worth it!

A truly captivating story, and an excellently produced audiobook.

It is impossible to get into this book or care about any of the characters!

This was something special, something different. The narration, calm, level and measured, the pace slow but steady. If you are sleepy when listening don't be surprised if it lulls you into dreams and you end up rewinding over half remembered pages
But don't let that make you think this is boring or tedious. The story is woven through with sub stories and plots that pull you ever in. You do not realise you have gone anywhere, know that anything much has come to pass until you think back over the action. I adored this production. I've not read the authors previous novel but I will now. The characters are both deep and elusive they are more emotion than substance for the most part.

promised much with beautiful descriptions and great writing, but the plot was convoluted and got bogged down in endless cats and stars and ribbons. got fed up halfway in

How can a book with so much promise fail to deliver so miserably? I loved The Night Circus - it was one of my favourite books from the time. This book had a good premise, and some nice lyrical passages, but I was overall just so disappointed. The characterisation was pretty much non-existent, there was no narrative drive, it was confusing, long, repetitive. I'm sorry but I really wanted to love this book. The performance was fine, but could not salvage it for me, I'm afraid. This book in no way lived up to the huge hype surrounding it, and that is a shame.

From the moment I embarked upon this story (I listened to it on Audible) I was confused and thrown into chaos. There was no consistency, logic or sense to the storyline. The only reason I even allowed myself to listen to the entire story was so that I didn't have to lie when I marked it as read. It was far too long and rambled on and on. Another reason I think I listened to it all was because the narrations were so soothing and lulled me into a kind of oblivion. I loved Erin Morgenstein's Night Circus. This in comparison, was a dismal, depressing failure.

Very well narrated and performed. I think, as an ensemble, this team is the best I have heard.

I enjoyed this tale which is substantially different from The Night Circus. There are many fewer characters and the locales are more proscribed.

Many times I was reminded of the computer game Myst. There were similar puzzles and hidden passages. Mysterious rooms with strange devices and surreal pictures which were part of the puzzle. Bookshop with clues and a succession of movable objects, or tokens which triggered progress into further rooms.

All this entranced me although I recognise that this style may not be to everyone's taste. Morgenstern's environment has a sense of distressed gentility. Almost louche.

Characterisation is fine and in fact some cases mysterious. Dialogue progresses the story but seems to become directed at cats much of the time. Fine with me.

All round I liked this book.

Poor choice on my part

Some stories are meant for you and some are not. This book was not for me. I had to actively push through this narrative and it almost put me into a reading slump 3 times. I can appreciate this beauty and its honouring of stories. But I think I need to walk way from Morgenstern and keep walking.

More than one story woven into one

The story is a multitude of separate stories, which also happens to be one story. These stories are woven into one and you are left at the shores of the Starless Sea and the habour to wonder what other adventures await the characters you were introduced to. This story reminds one to open new doors and to go exploring, wondering, meandering, and experience life to its fullest.

The story has moments of brilliance, but as an audio book is unfortunately by Dominic Hoffman's drawl, repeated miss pronunciations, clumsy rhythm, and painful, monotone drone.

A Love Letter to Storytelling

This book is stunning. It is beautiful, lyrical and so atmospheric. It pulls you in and doesn’t let go. It makes you believe in fairytales again.