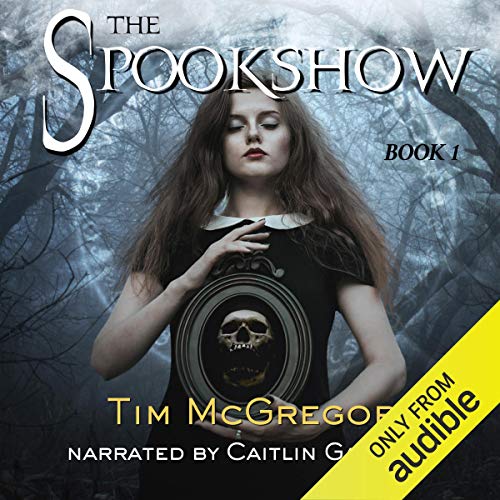 By: Tim McGregor
Narrated by: Caitlin Gallogly
Try for £0.00

Life used to be drab for Billie Culpepper, but all that changed after an accident left her in a coma for three days. That was when the spook show really began, when Billie realized that she could see the dead.

And the dead could see her.

Now they won't leave her alone.

Accompanying two friends through a haunted house, Billie uncovers a terrible secret that brings not only the police but the homicide detective responsible for putting her into the hospital in the first place. He's also the one man she swore to stay away from.

Author's note: The Spookshow is the first book in a new paranormal series about what lies on the other side of death. A young woman's latent psychic ability is awakened, allowing her to see the lost souls that surround us. This is part blessing but mostly a curse, and she struggles to deal with the awful truths the dead whisper to her. Complicating matters is the homicide detective who comes to her for help - a man she's drawn to but cannot be with. So far, the books are:

The Spookshow is a fast-paced introduction into the world of ghosts, murder, mystery, the occult, and the heartbreaks of wayward 20-somethings trying to find their places in life.

What listeners say about The Spookshow, Book 1

I like this story. though I dislike many of the female characters. most memorable moment was the first time they entered the murder house. The narrator was great believable as the main character Billie.

Tell me, tell me

This audiobook has the potential to be really scary but it fell short because of several large chunks of pure telling - it stopped me connecting to or caring about any of the characters. The narrator really tries but sometimes it’s hard to know who is speaking.

Left in the air

poorly read which distracts from the story and I gave up quite quickly due to that. the story at the start seems reasonable. I might try again in future but for now, not fo me.

Despite being relatively short, throughout the book I had difficulty remembering the characters. Maybe the characters were not 3D enough for me, maybe I was just not interested in them. Either way, my struggle with the characters made it harder for me to engage with the story.

I am glad I was listening to it on audio (I don't think I would have finished the book), however the recording did have some errors e.g. repeated phrases, some background noise etc. and altogether felt a little 'home made'. Now I'm all into my crafts and love home made, however I did find it distracting.

That said, I did enjoy the ending which left me wanting to know more - who knows, maybe I'll get the next book in the series...?!

Just loved this book! Creepy and eerie! Kept me listening and reading for more. On to the next book.

Ghost Story To Give You Shivers

Having read the series of books it was lovely to revisit this first book. Caitlin narrated it perfectly and I found myself looking at the characters afresh. The story introduces you to the main characters while making you comfortable in their world then springing frights and scares on you. I've never read a truly scary book before but this gave me goosebumps. Well worth a listen to....but I'd leave the light on if I were you.

The story isn't bad but it just stops. I realize it is a series but I expect each book to have a beginning, middle, and end even though the story will also continue. There was no resolution to anything. I feel cheated that I didn't get a whole story that left me wanting more. Instead it stopped like a chapter ending bit there isn't a next chapter.

This reminds me of the Goosebumps books I read as a kid. As an adult, I found it very hard to stay interested in this story.

What did you love best about The Spookshow, Book 1?

This was a thoroughly enjoyable book. I have this book on Kindle as well as an Audible. The story was engaging, the characters were developed well.

What does Caitlin Gallogly bring to the story that you wouldn’t experience if you just read the book?

I enjoyed Caitlin Gallogly's narration of Spookshow Book 1. Her voice was clear, animated, and pleasant to listen to. I did notice a couple of glitches...twice a sentence was repeated. I don't know if the original recording had been stopped and then repeated where it was left off. This did happen twice but seemed to be the only problem.

My only complaint about the story is that Books 1 and 2 seem to be reversed, that is--book 2 should be book 1 and vice versa. Story jumps to a "prequel." I have downloaded books 3 and 4 in this series but have not had the chance to start them yet. It is my hope that Book 3 will continue the story in Book 1. Other than that, I think it's a great story and am looking forward to continuing the series. I envision this as becoming a movie some day!

No Book Two for Me

This book was a hot mess. It was if it were written by an adolescent. The author needs to learn how to use adverbs.

The Spookshow, Book 1
By: Tim McGregor
Narrated by: Caitlin Gallogly
This book is pretty good for a haunted house story. One of the gals can see ghosts and gets talked into going to a house that is supposed to be haunted. The house is scheduled to be demolished so the want to sneak in and have her see if there really is ghosts there. What happens next no one expected! The one complaint I have is that the author kept referring back to something that happened in the past but never made it clear what it was. That was frustrating. Should have been a prequel.
Narration was good.

I enjoyed this book, or introduction to the series, so I do want to read more.

I listened straight through,

I listened straight through! would have given it 5 stars except it stopped. between one breath and the next breath it just stopped.... good thing there are more books!

loved it on audible. I couldn't stop listening to it while working. On my lunch break. Looking forward to book #2

I enjoyed listening to this well written story.

the narrator was fabulous I loved it! the story was extremely intriguing! I'm glad I purchased this book!

it was just okay. I was very disappointed in where it ended. This should have just been the middle of the book. It felt like the author wrote a whole book, split it in half or maybe thirds, or maybe fourths and the published them as if each would be a whole book.

I will not be buying the rest and risk paying multiple times for one book.