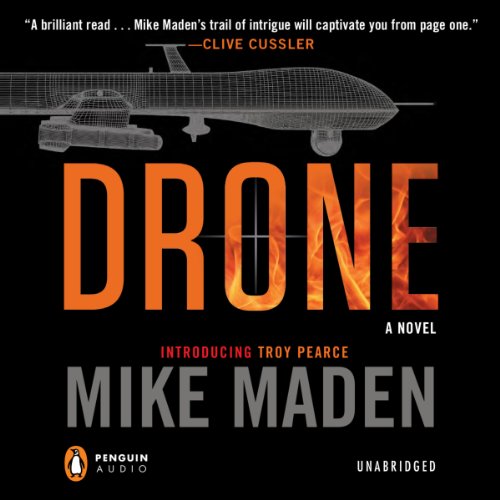 Troy Pearce is the CEO of Pearce Systems, a private security firm that is the best in the world at drone technologies. A former CIA SOG operative, Pearce used his intelligence and combat skills to hunt down America’s sworn enemies in the War on Terror. But after a decade of clandestine special ops, Pearce opted out. Too many of his friends had been sacrificed on the altar of political expediency. Now Pearce and his team chose which battles he will take on by deploying his land, sea, and air drones with surgical precision.

Pearce thinks he’s done with the U.S. government for good, until a pair of drug cartel hit men assault a group of American students on American soil. New U.S. president Margaret Meyers then secretly authorizes Pearce Systems to locate and destroy the killers sheltered in Mexico. Pearce and his team go to work, and they are soon thrust into a showdown with the hidden powers behind the El Paso attack - unleashing a host of unexpected repercussions.

"A brilliant read...Mike Maden’s trail of intrigue will captivate you from page one!" (Clive Cussler, number one New York Times best-selling author)

"Mike Maden understands that sometimes the most lethal warriors are those just out of sight. Drone is action-packed, with cutting-edge technology and an unforgettable cast of characters." (W.E.B. Griffin, number one Wall Street Journal and New York Times best-selling author)

What listeners say about Drone

As I said everything is there but unfortunately they character and writing isn't. Boyd are rushed that shouldn't be rushed and stuff that should be rushed is agonised over. Tom Clancy lite would be the comparison.

Drone just seemed to Drone on and on and...

Would you try another book from Mike Maden and/or Jason Culp?

I have listened to Jason Culp before. He is not in my top 10 favorite narrators but he is not the worst either.

Would you be willing to try another book from Mike Maden? Why or why not?

I'm not sure. I found myself checking how much more time was left a little too often. I found my mind wandering but had to finish just because.

I purchased this book because I noticed that a second book in this series was just released and I have had this one in my wish list for a very long time but was hesitant based on some of the reviews I had read.

Where is Maden's next novel?

Having run out of books by my favorite authors (Griffin, Clancy, Flynn, Demille, etc) to read, I was looking for something new to spend my most recent credit on. I came across Mike Maden's Drone. In an age where a large bit of our military capability has been outsourced to private military contractors, this book seemed to be incredibly timely and indicative of the world we currently live in. The story was riveting and kept a nice pace all the way through. I felt that the end was a little weak, but not enough to take away from the overall story. It was good enough that I hope we will see more from Maden, and his character Troy Pierce.

Mike Maden might be a successor to Tom Clancy. Drone is a terrific story with a great performance.

I had to mark this one down because I did not much care for the ending, but overall it was a good listen. I think in many respects when I listen to a novel of this variety I am thinking that there will likely be a sequel. I am almost certain, however, that there won't be one here. I don't think this one is set up that way. It's an interesting premise and there were only a few things that made me go "hmmmm." Definitely worth a listen, but likely not to be your favorite book.

Excellent narrator and and book. I’ve listened to a boatload of Brad Thor and every Vince Flynn book there is. LISTEN TO THIS BOOK!! I can’t wait for number three.

I am going to return this book! Am into the 4th chapter and I can't get past the really bad job Jason Culp does reading this--it's like its a National Geographic documentary with every word seemingly over-emphasized, meticulously pronounced as if reading to school kids. The story just doesn't flow. I have never understood the reasoning of publishers in their selection of readers--for books on tape, that's often more important than the story. This is a decent story line and I would have gritted out if the reader was better.

Very good in every respect.

So nice to listen to a story that grabs you at the first word and holds on to you through out.

...high tech thriller that was edge of the seat!

...not surprised at all to how good Mike Maden’s Drone series is. Good friend said it’s a good series and he is dead on! Couldn't put it down! Lots of techno thriller stuff. Drone is book one of four in the series. Hope the others are as good as the first one!

enjoyed the book, good story line and I look forward to reading the sequel. the author does seem to enjoy giving you vivid detail of folks being shot or blown up.

This book had very few slow points. it was action packed and well narrated. This book is a must.