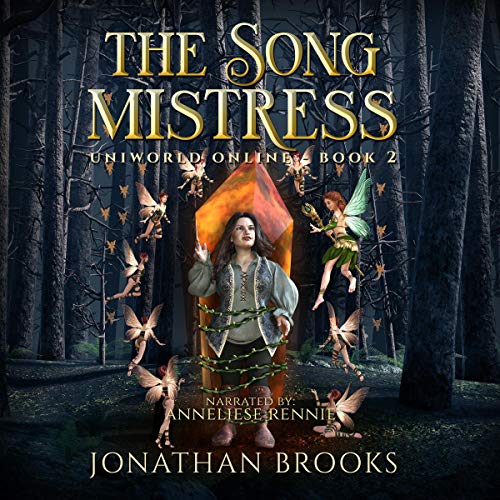 The Song Mistress: A LitRPG Journey

By: Jonathan Brooks
Narrated by: Anneliese Rennie
Try for £0.00

On the run with only her voice to defend herself and her friends.

After the events which caused Cadence to lose consciousness within Uniworld Online, she was now being monitored by the company in charge of the game - Unitech. This surveillance meant that the fledgling Song Maiden had to watch what abilities she used within the game, otherwise she might attract the wrong kind of attention and be accused of cheating or hacking.

Despite these setbacks, Cadence is joined once again by her friends Brendare and Wengla, as well as Mera - the grateful young woman the trio had narrowly saved from being sacrificed by Corrupted Druids. With new gear and a renewed drive to find and punish the players who had killed Cadence, they journeyed onward, getting stronger and picking up allies along the way.

Danger is just around the corner, however, as they learn that Brendare and the “mysterious Bard” are being hunted by guilds desiring to know the secret behind their winning dungeon run. When Cadence and her party are forced to quickly make their way toward Lightforge - the Human capital city - they are presented with a whole new challenge: crafting.

With everything going on within the game, Cadence is also ecstatic because her body in the real world is healing faster than her doctor had expected. In addition to her limbs recovering from the abuse they suffered at the hands of her attackers, something else is starting to heal which will change her life forever...

What listeners say about The Song Mistress: A LitRPG Journey

Great book, nice to have something different

I really like this series, it doesn't get bogged down in political intrigue and is focused on the characters.

The story does start to get a little repetitive, "Quick kill it! No, lets save it instead" is the premise of this book. But it does have things going in the background which makes it feel like all is not as it seems.

I will definitely be getting the rest of the series.

Enjoyed it. Looking forward to more!!

I enjoyed this story. Easy to listen to. Not to many stat updates. I look forward for Book 3

I enjoyed this book just as much as I enjoyed book one. This is a magnificent series I heard this is only a 3 book series and I am starting books 3 right away. I am having such fun listening to the series.

A middle with mysteries.

In this part the story takes both an unusual turn and a fairly straight-forward path. The world of Uniworld Online is definitely starting to appear to be more than it seems, yet only Cadence is noticing the world itself enough to notice it. Her friends also seem to be noticing the world itself more, even if they don't notice anything odd, and we start to get distinct hints of the larger story that is forming around Cadence and company. Although this volume seems to generate more questions than it answers it also does a spectacular job of directing where the story is going and setting things up for going into the final volume. For all that it has most of the usual problems of being a planned middle part (you need the previous part(s) to understand what is going on, but very little is actually concluded in it) it is an engaging and enjoyable story in its own right, a rare accomplishment, even in Jonathan Brooks' later novels. Again, the only notable flaw is the problems Anneliese Rennie has with those pauses for tables and section breaks.

loving this story. finished 1st book in one day 2nd book the next day and I am immediately starting the last book.

So far this book/series is the best Young Adult LITRPG book with a female lead that I've read/heard. As an older adult male, I can't give it 5 stars, but I can easily see it being 5 starts for its audience. This is a great continuance of the series.

Great book 2 in a great series

My word this series started strong and has just gotten better. I really have loved listening to these. Poor Cadence dealing through triple the trials she started with, but her friends are helping out. Things are definitely heating up for the heroines.

Our MC just can't help herself. She finds all kinds of interesting ways to get herself into trouble and she's not even trying. Plus the twist at the end of the book was just beautiful. I'm am so looking forward to the next book in the series this is going to be so much fun.

Candence and crew continue to grow, gain new allies (and enemies) and more about both Uniworld and Candence's real-life troubles are reveals in this fun fanstay litrpg story. I know that the third and final installment is due out soon, and can't wait to listen to it and see just how all the loose ends are able to be wrapped up!

Disclaimer: I was given a review copy for free and have voluntarily left this review.

cadence has grown much stronger but question is what will happen now that some of her advantages has been removed and what was that voice she recognized? jonathan PLEASE hurry with the next part of this adventure and as always thank you and yet another spectacular adventure!

this masterpiece leaves me wanting more asap so easy reccomend listen for sure. cant wait for the next one.