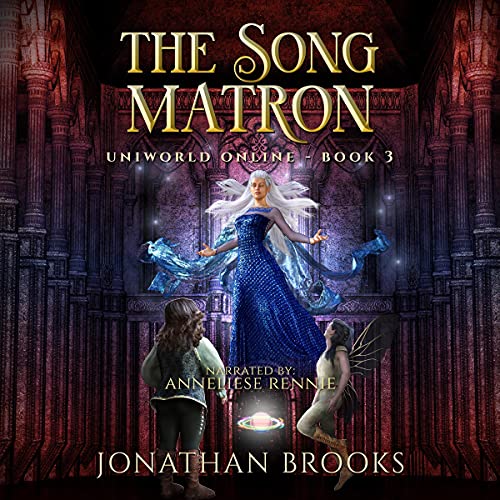 The Song Matron: A LitRPG Journey

By: Jonathan Brooks
Narrated by: Anneliese Rennie
Try for £0.00

Can one person change all of Uniworld by herself?

Cadence, the extraordinarily powerful Song Mistress, is back for the final installment of the Uniworld Online Trilogy! Joined by her friends in-game, she embarks on a journey to, somehow, bring peace to Uniworld - all while avoiding attempts from her own faction to kill her.

Now knowing who brutally attacked her back in reality - if not yet his real-life identity - Cadence must get stronger, learn more about her abilities, and devise a strategy which would make him confess to his involvement in her attack. To do that, however, she needs to survive long enough; the doing of which will be difficult, especially with the entirety of the Light faction out to get her.

With the only avenue for escape among their “enemies”, Cadence and her friends travel to the Dark faction, where she learns much-needed information regarding one of her oldest and most important quests. From that information stems an expedition into the unknown, which will bring her closer to her goal...and her destiny.

Find out how it all ends in the thrilling conclusion to the Uniworld Online Trilogy!

What listeners say about The Song Matron: A LitRPG Journey

I really enjoyed this series from book one to book three it kept me on the edge of my seat wanting more.

a super fulfilling ending to an awesome trilogy

annalise and jonathan are one hell of a combo....ive listened to many many of their collaborations....uniworld is one of my favorites...and this was one hell of a conclusion to an awesome trilogy...jonathan as usual has hit it out of the park with story,charature creation and advancement and a world all of its own...making you sad that it's over...but knowing johnathan...this is not the last of uniworld and perhaps cadence we will see and experience

I got the first book a few days ago and have never been happier that I have the ability to listen to audio books all day. Each book was wonderful and the characters were fun. story moved well and ended beautifully.

Fiction and Reality mirror each other.

The final volume of the Uniworld Online Trilogy is possibly the best of the three. We don't just get to see what is going on with the mysteries about the first Song Maiden, but Cadence's own journey builds up to a spectacular finish, with Uniworld Online itself being changed forever. I particularly enjoyed the rather.....spectacular way that Cadence manages to resolve things with her real-world attackers, it is a great example of poetic justice. Despite the fact that the world of Uniworld Online doesn't feel nearly as developed as some of Jonathan Brooks' later novels the way the story flows and concludes in this one might actually make this trilogy one of his best series overall. Anneliese Rennie still has problems with the pauses for tables and section breaks, though if you listen to all three in close succession you'll barely notice by this point.

a grand YA book

I really enjoyed this series even tho I wasn't the target audience. It appears to be targeted for YA girls, and would be a 5/5 for them.

wonderful conclusion to the series!

This audiobook concludes the trilogy. Our music loving dwarf must complete the final stage in her epic quest. Additionally she must deal with issues in the real world that pertain to the monster who disfigured her and has captured her friend.

Annaliese does a fantastic job with the narration!

This book was fantastic and I thoroughly enjoyed the series!

Didn’t love it didn’t hate it

I hope there is a followup series

This was a great series and a great resolution. It does paint the backdrop for a potentially even more epic sequel series and I hope it becomes a reality because this was amazing. The series had exactly one swear word and it was at a very high pressure point, but it was great to listen to and would be interesting to a wide range of readers.

A great ending to to a really good story

Song Matron is slightly more combat focused like Song Mistress, but it still manages to satisfyingly finish off all of the different story lines that had been built in the previous books. I had a great time hearing the main character's development from a victim to a victor while still retaining the charm that made me like her so much in Sons Maiden