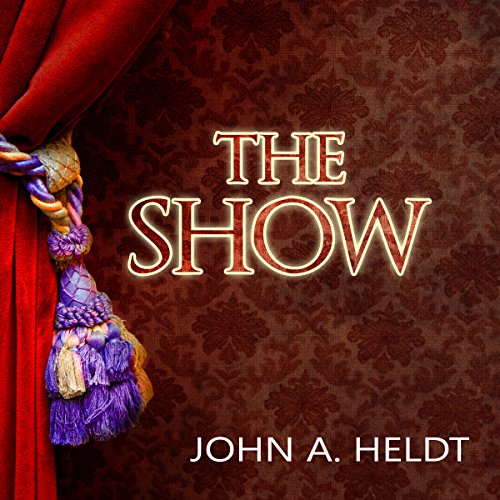 By: John A. Heldt
Narrated by: Sonja Field

Seattle, 1941. Grace Vandenberg, 21, is having a bad day. Minutes after Pearl Harbor is attacked, she learns that her boyfriend is a time traveler from 2000 who has abandoned her for a future he insists they cannot share. Determined to save their love, she follows him into the new century.

But just when happiness is within her grasp, she accidentally enters a second time portal and exits in 1918. Distraught and heartbroken, Grace starts a new life in the age of Woodrow Wilson, silent movies, and the Spanish flu. She meets her parents as young, single adults and befriends a handsome, wounded army captain just back from the war. In The Show, the sequel to The Mine, Grace finds love and friendship in the ashes of tragedy as she endures the trial of her life.

What listeners say about The Show

This was a very cool story.A man crosses into a portal from the year 2000 into 1941,and falls in love.His girlfriend follows him to 2000,only to be transported back to 1918 at another point.No breach of timelines are mentioned,but I do wonder.I was gifted this book by either the author,narrator or publisher.The narrator,Sonja Field was terrific!

How to survive across Time!

Yes, this was a very original concept for a story and was well thought out and written.

Grace is the one who experiences all the ups and downs but never gives up.

What aspect of Sonja Field’s performance would you have changed?

Sonja was a little flat during some of the scenes. I would have wanted to listen to more feeling in her voice. But still, she did try to express the Characters well.

Love does not change across all Times. Something like that.

I enjoyed listening to this story! I did receive this book for free, from AudioBoom, in exchange for a unbiased review.
Thanks!

If you're a fan of time-travel SciFi but require a healthy dollop of heart-yearning, Christian romance mixed in, then "The Show" certainly is worth the price of admission: the narration is fine-and-dandy, the writing is not bad at all, the plot contains a few unexpected twists, and the content is exceedingly light on sin (no profanity, violence, or graphic sex). It's family-friendly fare all the way.

"The Show" marks the second in a series of similar time-travel-themed romances by author John A. Heldt, whose knowledge of history may have something to do with his having worked as a reference librarian at one point in his life. As a result, all of his settings are presented with a certain air of authenticity and attention to detail; descriptions of fashions and customs of generations gone by always seem plausible.

The plot itself concerns the misadventures of one Grace Vandenberg, a beautiful and kind young Christian woman with her sights set on marrying the man she loves--even if that means following him through time. Grace has enough spunk to get the job done. She's the type who won't hesitate to administer CPR to a dying man if the situation calls for it. References to Bible verses surface here-and-there. Grace cannot help but feel the touch of God in everything that happens to her. Thus when she finds herself unexpectedly transported decades back in time, away from her beloved boyfriend, she takes it all in stride: "God had dealt her a hand," observes the third-person, limited-omniscient narrator, "called nineteen-nineteen, and she [Grace] had a moral obligation to play it." Such is an example of the type of moral constraints acting upon our time-tossed protagonist and which underscore the general tone of the novel.

Though not entirely obvious for much of the first part of the story, the novel's title is a reference to the time portal that whisks Grace away to the distant past. "The Show" itself is a particular movie playing at a particular theater, the combination of which apparently satisfies just the right number of conditions for the time portal to open up in, of all places, the bathroom of the theater. Perhaps this is a cheeky nod at the habit of a woman informing a date that she is “off to the powder room,” and then disappearing for a half-hour or so. Whatever the reason, once Grace has departed on her adventure, she cannot return until all the right conditions are met again—same movie, same theater—but this proves harder than it would seem. Even worse, Grace knows from history that this particular theater is destined to be consumed in a fire, and so the clock is ticking.

Ultimately I do not consider this novel to be in quite the same league as some other time-travel novels I've read, but Heldt does at least a satisfactory job here, peppering "The Show" with enough twists and time-travel-conundrums to satisfy many fans of the genre; I wasn't displeased. Certainly the wholesome tone ensures there's nothing here to frighten or traumatize a reader, so if you're looking for more sinful time-travel tales that contain, nonetheless, some element of romance, you might try other authors, such as Brett Battles (known for the "Rewinder" series), whose central character erases an entire civilization; Mitchell & Mechem ("The Man That Time Forgot"), whose protagonist lies and steals to survive; Sean Ferrell (author of the most excellent "The Man in the Empty Suit"), whose main character must solve his own murder; and especially the incomparable Clair North, whose "The First Fifteen Lives of Harry August," while technically more time-loop than time-travel, is a modern masterpiece of suspense. Currently, all of these books are available for download on Audible.


Please note: I was provided with a free download of "The Show" for review purposes.

Would you consider the audio edition of The Show to be better than the print version?

I have both, so when I can't sit down to read, I enjoy listening to the audio. It's great to flip back and forth and never lose your place

What other book might you compare The Show to and why?

The Mirror was similar as it happens during the same lifespan.. where the character goes back and meets the parents.

Which character – as performed by Sonja Field – was your favorite?

Yes, the decision that Grace had to make.. so hard..


This audiobook was provided by the author, narrator, or publisher at no cost in exchange for an unbiased review courtesy of AudiobookBoom dot com.

I really enjoyed this book! There was a point around the time they were dating in 2000 where it kind-of lagged. But it soon picked back up and really enjoyed her trip back to the 1918. Overall I would recommend it to others. Already have the first one on my Kindle to read next. Thanks to the author for giving me the opportunity to listen and find a new series to enjoy.

I would recommend this book to everyone how likes a good listening.

What other book might you compare The Show to and why?

The narrowing matches the storyline, and the characters.

I didn't have an extreme reaction to this book, it makes you laugh and cry.

Really Gets You Thinking

What did you love best about The Show?

I love the time travel but I like best how love drives us to do wild things.

Joel who is cool and calm and so accepting.

Which character – as performed by Sonja Field – was your favorite?

Grace, having to go back in time and doing without the things from 2000. Must have been awful after just getting use to them.

Yes, I hated to put it down, but alas one must sleep

This book is an enjoyable romp through time. Romance and travel with history added in.