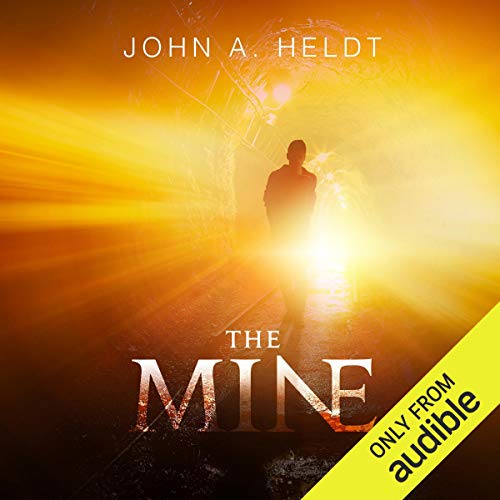 By: John A. Heldt
Narrated by: Aaron Landon

In May 2000, Joel Smith is a cocky, adventurous young man who sees the world as his playground. But when the college senior, days from graduation, enters an abandoned Montana mine, he discovers the price of reckless curiosity. He emerges in May 1941 with a cell phone he can't use, money he can't spend, and little but his wits to guide his way.

Stuck in the age of Whirlaway, swing dancing, and a peacetime draft, Joel begins a new life as the nation drifts toward war. With the help of his 21-year-old trailblazing grandmother and her friends, he finds his place in a world he knew only from movies and books.

But when an opportunity comes to return to the present, Joel must decide whether to leave his new love in the past or choose a course that will alter their lives forever.

The Mine follows a humbled man through a critical time in history as he adjusts to new surroundings and wrestles with the knowledge of things to come.

"With an irresistible, ironic humor and an obvious appreciation of history and a few - I didn't see that coming - surprises Heldt has written a tender, refreshing and though tprovoking romance guaranteed to entertain." (Happy Ever After blog, USA TODAY)
"The Mine is one of those stories that sneaks up on you and sweeps you off your feet." (Librarian's Best Books of 2012, Library Journal)

What listeners say about The Mine

The mine is an excellent story, well worth the money. The author was new to me, and I'm very happy that I took the chance - I loved the book and look forward to the sequels being released on audible!

Curse you Mr Heldt, what have you done to me? You have taken me from my usual genre of zombies and or historical wartime leaders/events/characters and sometimes with the two combined 

You have got me interested in what is essentially a love story… a love story with a twist! This is something I was not expecting. I was expecting alternative history time travel full of action with world war 2 playing a wham bam zap and pow type affair. What I got was a great tale of love across time zones.

I often found myself thinking about ‘what would I have done?’ Although Joel the main character has nothing in common with me, he is handsome, I’m….. well ugly. Joel’s a ladies man, I’m… well a desperate fat man! He is young, I’m old. He is rich, I am not. But I wanted it all to work out in the end for him.

I won’t give any of the story away, because I think this is the type of book that is best to go into with no idea of what is going to happen. However, I will comment on the narration. The narration does manage to suit the characters very well. The only negative with the narration was that it was a little slow and did require a bit of a speed up. This did in turn lessen the listening hours. On the bright side you can listen to this one in a single day.

I hope this is not an indication of my taste changing because I am quite happy with my normal listening choices. But Mr Heldt has caused me to think again!

TWO THUMBS UP FROM THE FAST FAT MAN!

Would you listen to The Mine again? Why?

Enjoyable book using the concept of time travel. Characters enjoyable and book kept my interest. How do our choices affect destiny and the lives of others.If you enjoy books similar to this, it is worth reading.

Oh, this could have been a good alternate history

I liked the premise, and the eve of WWII period piece details were good as Josh gets transported back in time from 2000 to 1941.
Marginal character development -this has more than a touch of romance novel; Josh is almost perfect in appearance and deeds. Some odd anachronisms in the details and language. I was happy enough to finish it and can even imagine reading a sequel (my standards aren't all that high...) but I did find myself rolling my eyes at some of the language and plot holes.

Hey, this was a fun book!

I love time travel books. Many authors just don't do a great job pulling it off. But this one was a winner. While I wasn't a fan of the narrator, I thought the story was engaging and fun, but with enough depth to keep me interested. Still a little light on the initial emotion of being transplanted back 5 decades. It always annoys me when characters just step into the past and go about their business without a lot of confusion, homesickness, or problems adjusting. The storyline was a good one though, and while the ending was predictable, it was still a fun listen and a pleasant surprise.

I like this book because it had great ideas and morals it just didn’t live up to its full Potential. It was more of a love story than a sci-fi story. It was interesting the characters were well developed but it fell flat when it came to The science fiction part.

I really enjoyed this book.I am looking forward to the next in the series.Aaron Landon was the perfect narrator.“I was voluntarily provided this free review copy audiobook by the author, narrator, or publisher.”

I love the nostalgia of the era that Joel returned to and the author's descriptions. Joel maturity portray's the path we all have to take after college.

I like time travel stories, it is
a bit predictable but entertaining I recommend it to those with similar taste.

Great beginning of a series! I just wish the rest if the series was whispersync so that I could listen to it in my car!