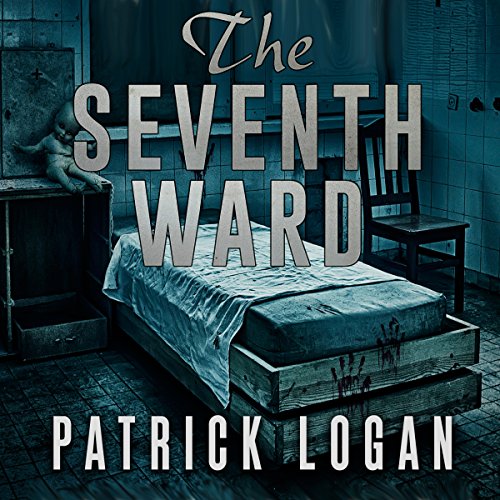 Not all hospital wards were built to heal people.

A grieving Robert Watts has little down time. Though he now has a house to live in, and friends new and old to join him, his financial woes have not been resolved. And he has yet to come to terms with the things that he has seen...and experienced. That is until Rob, Shelly, and Cal receive a visit from the mysterious Sean Sommers who offers them another job. Only this time, it's not a haunted estate that they are commissioned to purge, but an abandoned hospital ward...The Seventh Ward, a place that has been locked for decades, trapping more than just a horrible history within. This time, Robert finds himself narrowly tight-rope walking between life and death, the living and the dead. The problem is, Robert isn't sure which side he falls on anymore.

What listeners say about The Seventh Ward

The story was fairly entertaining with fewer grammatical errors than in the first book, but way too many instances of the f-bomb and the word "quiddity." I liked the character of Cal, but Shelley is annoying, though she is a much more self-confident person than Cal.

This story was set in an old psych hospital populated by the ghosts of insane patients, doctors , and nurses--the familiar setting of numerous B-movies. Robert, the main character, is injured and briefly crosses back to the Marrow (some place which must be crossed after death, as far as I can gather). More questions are raised about the identity of Sean and why he has chosen Robert to send the ghosts on to the afterlife.

I will likely get at least one more book in this series. The narrator was fairly good and I also knew which character was speaking. These first two books are okay for listening while doing chores because the story does not require intent concentration.

Would you try another book from Patrick Logan and/or Michael Pauley?

I'm not sure. I'm staying away for now.

What could Patrick Logan have done to make this a more enjoyable book for you?

The female main character is irritating. She also says the "f" word far too many times, and with such gusto and sarcasm, it is uncountable. It gets in the way of the story and though the "f" word family (-er, -ing, etc) doesn't bother me, it's so overused by this annoying character that I was totally over it half-way through the story. I started hating the character and hoped she would die in the mental hospital they were stuck in.

What aspect of Michael Pauley’s performance would you have changed?

I think his voice is very robotic and slow. It took a long time for me to get used to it. In fact, I just passed on the book "Skin" because in the first five words of the sample audio clip, I knew it was him. I looked up all the books he has narrated, an this one was in the list. Which reminded me that I needed to review it. He needs to be less intense during the less intense parts of the story, and he needs more inflection in his voice.

Did The Seventh Ward inspire you to do anything?

It inspired me not to read the next in the series. Honestly, the series itself is good. I enjoyed the first book, Shallow Graves, very much. The "fu**ing woman" hadn't shown up yet, so it was much better than the second book.

I have a feeling that the female character (Shelly, I think), is going to be central for the rest of the series, so unfortunately, I probably won't be listening to another unless I read reviews otherwise. It's a shame that this one character is killing the series for me. I would have preferred Robert alone. The additions of the two sidekicks makes the second book a little slapstick. I don't like much humor in my horror. And stupid, profanity-laced humor is off-putting for me. Maybe I will try again someday.

I like a book that I can get into and not even realize how much time has passed as I listen! I can get my cleaning done clothes folded and other chores done as I listen and the next thing I know I am done with chores and I am done with another great story! Thanks for making house work so much more enjoyable!! 😃😉

Storyline of the speakers absolutely nuts but I really love it. It is quickly becoming my new favorite series can't wait to read the rest

Anticipating and annoyed. You can't reveal to the reader the identity of the "Goat" and leave it at that.

Which character – as performed by Michael Pauley – was your favorite?

Do you think The Seventh Ward needs a follow-up book? Why or why not?

Yes, the readers need answers to questions. For example, who is Sean and why is he giving Robert jobs to do. Why was Robert chosen? Can Michael Pauley change the way Shelly sounds? What is the story with the Goat?

Why does it seem like Robert loves his daughter to the point that he makes mistakes thinking he'll see his daughter, but the relationship between Robert and his daughter Amy wasn't well developed. The reader is to assume that Robert and Amy had a very close bond, but that wasn't the case if you've read Shallow Graves.

this is very good I want more

The story was hard to follow going from present to 9 years ago. The beginning doesn’t make sense when you get into the book. I do have to give the narrator credit for doing a really good job of bringing the main characters I life.

Omg Patrick this was great I loved the ending can't wait to tag the next book!!! You have a new loyal fan in me