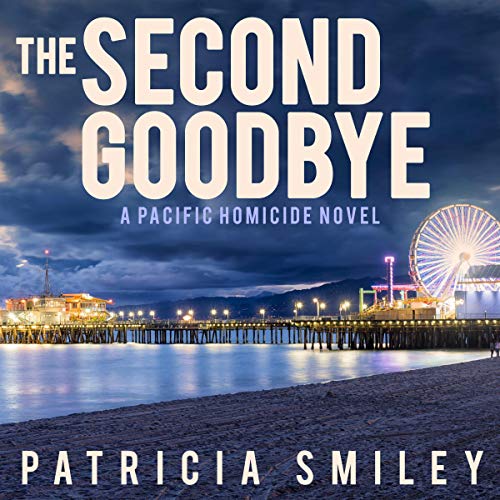 By: Patricia Smiley
Narrated by: Harley Jane Kozak
Try for £0.00

That's the touchstone for every homicide investigation Detective Davie Richards undertakes. She approaches her latest case the same way, determined to learn as much about the victim as she does about the killer. But there's nothing about 34-year-old Sara Montaine or her death that makes sense. Was Sara a saint caring for her dying husband or a gold-digger with a sketchy background? Did she commit suicide or was she murdered? As Davie digs deeper, she unearths Sara's troubled past and a viper's nest of villains who are willing to kill to keep their secrets hidden.

"Patricia Smiley tackles Michael Connelly territory and succeeds with a realistic, compelling police procedural in the badlands of contemporary Los Angeles. Detective Davie Richards is a smart, no-nonsense heroine, and the story-telling had me turning the pages at the expense of mundane activities like sleeping. The Second Goodbye is an intriguing mystery laced with well-researched law enforcement practices." (Raymond Benson, author of The Black Stiletto Serial)

"The Second Goodbye is a straight ahead jolt of police procedural adrenaline! Just a great story told by a great storyteller.” (Matt Coyle, Anthony award-winning author of the Rick Cahill Crime Series)

What listeners say about The Second Goodbye

Perfect Pairing of Author and Narrator

Patty Smiley's The Second Goodbye has everything you want in a cop mystery--a winning but flawed protagonist, deep knowledge of police procedures, rising dramatic tension, and a supporting cast that piques interest and propels the plot. Others have remarked that Smiley's books remind them of early books in the Harry Bosch series by Michael Connelly. That's high praise indeed. As Smokey Robinson once sang, "I second that emotion." Eight of those Bosch books were narrated on audio by Broadway star Len Cariou in a perfect match of an author's written words with a narrator's spoken ones. Sadly, Mr. Cariou is no longer doing the Bosch narrations. Happily, with The Second Goodbye I've found a pairing that equals the Connelly-Cariou partnership in Patricia Smiley and Harley Jane Kozak. Kozak, a veteran actor and novelist herself, captures every nuance of Smiley's words adding to the depth of characters and the drive of the story. She's so good that I'm tempted to write a book with a female protagonist just to get Kozak to do the narration. The bottom line? A terrific crime novel made even better by the narration. Bravissima!

I just finished The Second Goodbye on the advice of a friend and was pleasantly
surprised. As mysteries go, it was a great listening experience. The story
engaged me right from the beginning and kept my interest up to the end. There
were no radical plot twists, which I often find irritating, and I didn't lose
the story line in the thick of prose as is sometimes the case.

What impressed me most was the narration. Truthfully, I’m usually a little
skittish about listening to books with a female narrator. I want to become
engrossed in a story without being distracted by the voice and, for me, male
voices (my favorite is Will Patton) are generally more “neutral” than
female voices. Harley Jane Kozak’s narration is an exception. Her reading of
the book is excellent, and her characterizations are superb. Her voice has the
just the right balance of animation and control. Far from distracting from the
story, she brought it to life.

Believe me, I have used Audible’s return policy many times. I don't hesitate
to send something back if I find the narration boring, confusing or
irritating. But this one's a keeper.

Having read the print edition of Pacific Homicide (book 1 in the Davie Richards series), then the Kindle Version of Outside the Wire (book 2) I was especially eager to plug into the splendid audio narration by Harley Jane Kozak for The Second Goodbye. All three delivered the goods. What I especially appreciate about Smiley's deft storytelling is her masterful layering of exposition of background, police procedural nuances and narrative through lines that stitch together what readers need and want to know. Her credits acknowledge Smiley's active role as subject matter expertise at writer's conferences. Students of the craft may well examine The Second Goodbye (as well as the other titles in the series) to experience the key takeaways and insights from one of her conference sessions. Law enforcement folks will appreciate the shoe leather and door knocks Det. Davie puts in that should pass any detailed inspection. Thanks Harley Jane Kozak for giving our ears your special gift of shaping the audio presence with dynamic delivery.