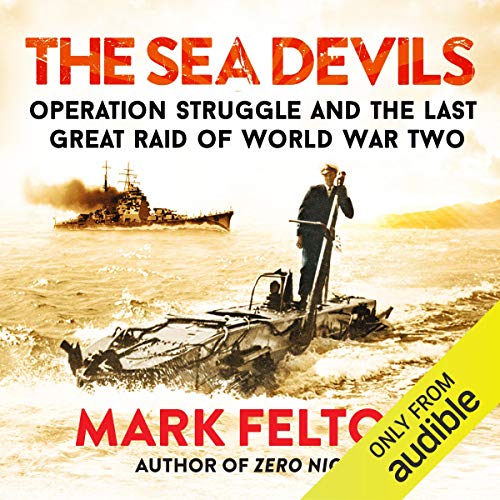 By: Mark Felton
Narrated by: Mark Meadows
Try for £0.00

Success will hasten ultimate victory over Japan; but if any of the men are captured they can expect a gruesome execution. Can the Sea Devils overcome Japanese defences, mechanical failures, oxygen poisoning and submarine disasters to fulfil their missions?

Mark Felton tells the story of a band of young men living on raw courage, nerves and adrenaline as they attempt to pull off what could be the last great raid of the Second World War. Suddenly a great dark mass of green and grey angular shadows filled the little periscope's lenses. There, as plain as day, dominating the Strait, sat the heavy cruiser Takao.

Fraser felt wired up, his senses heightened, and the knot of anxiety that had been plaguing him on and off since starting the mission had suddenly evaporated. He turned briefly to his crew: 'Stand by to commence attack.'

What listeners say about The Sea Devils

I have a general interest in WWII as well as the more clandestine areas of the war and this book caught my attention, not knowing much of the X-craft missions beyond the Tirpitz attack.

The book covers the time after these attacks: the development of the new XE series, the selection and training of the new crews and the struggle to find and justify a mission in the Pacific theatre in the closing stages of WWII (where British influence is waning and the US are in control of much of the strategy). It deals with the overall strategic situation sufficiently to put the X-craft program in context, while explaining the tactical aspects that defined and influenced the missions.

The author has taken the time to interview as many of those involved as possible and uses sections of conversation where possible, giving the accounts a flavour of what it was like to be there. Additionally all the key individuals have a short biography in the epilogue.

The narrator does a nice job with the text, and his accents of the Australian, New Zealand and regional variations of the Brits helps you keep up with who's who, especially useful in an audio book (as I'm often doing something else - like the washing up - while listening).

Overall this is a well written, well researched, nicely narrated addition to the overall history of WWII and in particular the X-craft story. I would be happy to recommend it anybody with an interest in submarine warfare, the British involvement in the closing stages of the Pacific theatre, special operations or a general interest in WWII.

Love everything Mark Felton does.
Like some people, got this after enjoying his youtube work.
He does his research, and weaves it into a very engaging story.
He even narrates it perfectly.
Highly recommend to anyone with a vague interest in the general subject.

Well narrated and fantastic storyline. It never ceases to amaze me how brave our fellow and allied countrymen are

Found this after enjoying Mark Felton on YouTube for a long time and was excited upon stumbling upon his name and was not disappointed.

Living just up the Clyde from where most of the training took part it was an absolute pleasure to read about those incredible men. I highly recommend this to any considering, especially if you have a love for wartime history.