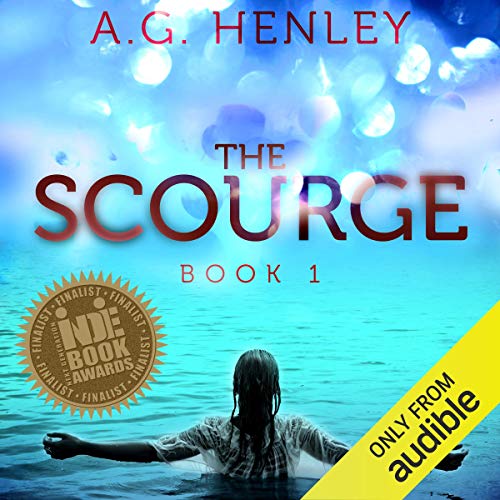 By: A. G. Henley
Narrated by: Emily Zeller

Seventeen-year-old Groundling, Fennel, is Sightless. She's never been able to see her lush forest home, but she knows its secrets. She knows how the shadows shift when she passes under a canopy of trees. She knows how to hide in the cool, damp caves when the Scourge comes. She knows how devious and arrogant the Groundlings' tree-dwelling neighbors, the Lofties, can be. And she's always known this day would come--the day she faces the Scourge alone. The Sightless, like Fenn, are mysteriously protected from the Scourge, the gruesome creatures roaming the forests, reeking of festering flesh and consuming anything--and anyone--living. A Sightless Groundling must brave the Scourge and bring fresh water to the people of the forest. Today, that task becomes Fenn's. Fenn will have a Lofty Keeper, Peree, as her companion. Everyone knows the Lofties wouldn't hesitate to shoot an arrow through the back of an unsuspecting Groundling like Fenn, but Peree seems different. A boy with warm, rough hands who smells like summer, he is surprisingly kind and thoughtful. Although Fenn knows his people are treacherous, she finds herself wanting to trust him. As their forest community teeters on the brink of war, Fenn and Peree must learn to work together to survive the Scourge and ensure their people's survival. But when Fenn uncovers a secret that shatters her truths, she's forced to decide who and what to protect--her people, her growing love for Peree, or the elusive dream of lasting peace in the forest. A tale of star-crossed lovers, strange creatures, and secretive, feuding factions, The Scourge introduces readers to a rich and exciting new world where nothing is as it seems.

What listeners say about The Scourge

Would you consider the audio edition of The Scourge to be better than the print version?

Never read the written version.... but the narator made it amazing, especially Perris corrector.

Perri - I loved his thoughtfulness, kindness, humor and I guess I just liked him!

Fenn - I really relate to fenn, with here 'sightlessness' I understand some of the struggles she goes through on a much deeper level.

Her tones of voice, she really bought the characters to life

Yes I cried a lot!
there was one point in the middle of the night when I was reading that I burst into tear because I thought Perri was going to die.

Book 1 is good but first read about book 2 below

Where does The Scourge rank among all the audiobooks you’ve listened to so far?

I have listened to so many wonderful books like Hunger Games, Divergent, enclave, Legend, Shatter me, Unwind... that I hate to say that this book is in the middle because it is a great book but compared to ones listed above, it is below those.

This book really puts you in the shoes of a blind person. It was whole new way of telling a story that was unique to this series. She had to describe scenes and people by other means other than sight so I really felt like I was "blind" while listening to it but in a good way. It is a dystopian setting with the protagonist being a strong, young female. The book is written well and the performer does a great job. It is not gory and there is no cursing. However, the second book of this series does have a rapist that attempts to rape her and he eventually is painted as a good guy who was just being "silly" when he was attempting to rape her. She continues to hang out with her almost rapist and when other males try to protect her from him, she always scolds them and tells them to stop fighting as if she were talking to squabbling children. I am not sure that is a good message to be sending to young girls. That takes place in book 2 so that is something you should be aware of before you read book 1.

So unique and twisty, LOVED the narration

4.5 stars — I was sucked into this book almost immediately from the start. The concept was so unique, the details were superb, and the attention paid to Fennel’s sightlessness made me feel sightless myself. And I genuinely think that a great book was made even more spectacular by listening to it.

Emily Woo Zeller freaking NAILED the narration of this story. She had so much emotion, I FELT everything that Fenn was going through. And the range of voices Ms. Zeller has is truly remarkable — and they were always consistent! I pretty much always knew who was talking before the narrative even gave it away. Not only that, but her level of acting just made everything come alive — she followed the directions of the book to a tee. I honestly don’t think I can do anything but listen to the rest of this series when I get around to it.

Fennel was just the kind of heroine I can immediately connect with. She’s brave, strong, humble…but also sassy, bold and curious. I LOVED “seeing” the world through her other senses — it really made it easy to get into her head, because she always described things by smell, sound, touch, and taste…or by the variable light she could faintly detect. It was fascinating. She definitely was not perfect — stubborn to a fault. And oh how I ached with how hard she resisted her feelings for Peree, even though they were obvious.

And Peree himself was definitely not perfect! He frustrated me to no end with his leaping to conclusions and jealousy…not that it wasn’t justified, but really. At the same time he was so sweet, thoughtful, protective — and he matched Fenn on humour PERFECTLY! He may not have been perfect, but I loved him.

I loved seeing their relationship develop and survive the prejudices of their peoples. They really made me ship them so hard.

The twists and turns of the plot always kept me on my feet, and I rarely knew what was coming next. The secrets that were revealed were just astounding. My heart ached watching Fenn and Peree both struggle with everything.

Obviously there were a ton of fantastic secondary characters — and all fleshed out really well that they felt real.

I absolutely LOVED the storytelling sprinkled throughout — especially after hearing where they came from in the author’s afterword.

So yeah. I am often wary of these early Indie books…I’ve had the ebook since 2012. But this one pleasantly surprised me at every turn. And even though the ending was super satisfying, and I could stop and not be left hanging — I know I’ll be checking out the rest to see what will happen next.

The Scourge is an apocalyptic dystopian story about flesh-eaters and the surviving human beings who dwell in the forest after the outbreak. The few remaining humans either live in the trees or in the caves. Groundlings live in the caves and Lofties live in the trees. They live separate lives with limited to no contact. A water bearer from the Groundling community retrieves water for them while a Lofty protects them from the flesh-eaters. This is a story about the water bearer and the keeper moving forward in life.

Narrator:
Emily Zeller had her work cut out for her. Not only is she the solo performer of this story, but she is also the voice of all of the characters in this character driven story. What a challenge she faced. I enjoyed every voice used to bring life, to each of these characters.
I really enjoyed Emily’s performance. She brought back fond memories of a story I read so long ago, yet still fresh in my mind. The sound quality was excellent with no outside disturbances. The tone and pitch used to voice all the characters was spot on,

Overall:
AG Henley took a different approach to an apocalyptic storyline with her forest dwellers and sightless characters.
This was a wonderful book for all ages. The characters were well developed and likable.
The story is primarily from Fenn’s perspective. Finn had limited to no knowledge of the world prior to the Scourge, but Peree had story’s he liked to share with her.

I loved this story. A very touching, sweet, and heartbreaking tale. I highly recommend it.

I was provided a free copy of this book in exchange for an unbiased review.

I really enjoyed this book. I liked the original storylines and the characters were very interesting. look forward to hearing more.

Would you listen to The Scourge again? Why?

What was one of the most memorable moments of The Scourge?

The only issue I had is that the male characters sounded over-exaggerated. I almost returned the book 1 chapter in because I felt like it was beind read in the way I might read to my young child; over exaggerated and comical.

There are some heartbreaking moments in the book. As a mother, I felt my heart break twice over when discussing The Exchange.