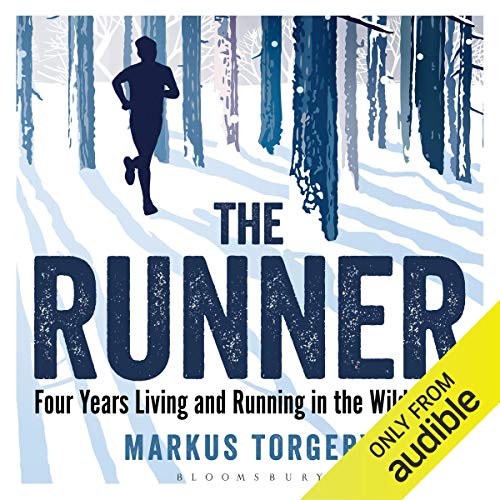 Markus Torgeby was just 20 years old when he headed off into the remote Swedish forest to live as a recluse and dedicate himself to his one true passion: running....

He lived in a tent in the wilderness, braving the harsh Swedish winters - for four years. This is his story. A best seller in Sweden, the audiobook is a powerful exploration of running and personal well-being.

During his teenage years, Markus Torgeby turned out to be a very talented long-distance runner. It didn’t take long before he was discovered by an enthusiastic coach who set very high goals. However, while Markus performed brilliantly in training, during competitions he often failed inexplicably.

These pressures, along with the burden of having to care for a MS-suffering mother, took their toll, and when an injury put an end to Markus’ running career, he lost his foothold in life. In order not to completely go under, he chose to do something that most of us only dream of: to escape the modern world.

Aged 20, Markus Torgeby decided to move to one of the most isolated and cold regions of northern Sweden. He was going to live right in the middle of the forest, alone. There he lived as a recluse for four years. The only thing he kept was his running - his 'drug', the one thing he couldn't be without. His time alone would prove to be more than an escape and was in fact a search for a direction in life.

The Runner is a unique and powerful audiobook which can be listened to both as a portrait of an extraordinary man and as a fascinating exploration of running and personal well-being. The audiobook will certainly strike a chord with the running audience, but it has the potential to find a wider listenership than that.

What listeners say about The Runner

I really enjoyed the story and his life and the final chapter really closed the book well.
I gave 4 stars as at times you lose a sense of the timeline and on the audio it comes across quite jumpy. It leaves you a little unsure and hard to follow.

I’d still really recommend for any runner or outdoors enthusiast nonetheless and the whole book gives you a sense of how to be more one with yourself and nature.

Perfect and awe-inspiring account of one man's journey away from the maddening crowds and into the sublime solace of the wilderness. Craziness can bring peace of mind and a break down can be a breakthrough!

On the fence, really struggled to like the story. There is something about it just seemed like a waste of time then I did go to the end.

I loved the story and the narrations. it changes my perspective about a few things in life

Maybe if we all took a more simple approach to life with less things the world would be a better place.

Thoroughly safisfying listen. Relaxing and motivating at the same time. Great work by Markus and I could listen to Gunnar narrate all books.

A brilliant listen , love it. Amazing story of a inspiring guy. A + +

good story with lots of personal insights. worth a read or listen. just a litter slow.