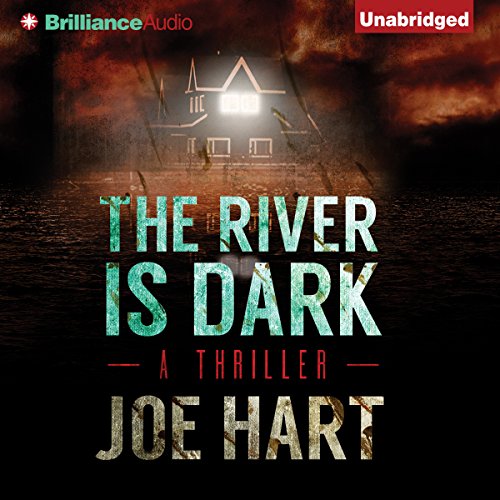 The River Is Dark

In a small town along the Mississippi River, separate but nearly identical attacks have left two married couples brutally murdered in their homes. A young boy—the lone survivor of the killings—now lies comatose in the hospital. And the police’s only lead is the boy’s terrified description of the assailant: a “monster.”

Enter former homicide detective Liam Dempsey, whose estranged brother fell victim to the killer. Dragged into the investigation as a suspect, Dempsey vows to solve the case and clear his name. But two things stand between him and the truth: a web of local politics, and the grim secrets the victims held close. All the while, a murderer with boundless hatred continues to raise the body count.

As the troubled ex-cop tries to pull justice from the town’s emotional wreckage, he realizes that his could be the next life lost to the killer’s ruthless, twisted plan for revenge.

What listeners say about The River Is Dark

A really good book, kept me wondering what was coming next. Well written and entertaining.

Save you money - and time!

The only time the narrator was able to capture my attention was when he was speaking in "someone else's voice". The rest of the time, he sounded like he was reading items on a menu. I had the story figured out in the first half hour and neither the language or plot kept me engrossed. I listened as long as I could stand it and then - out of pure frustration - stopped listening 15 minutes before the end. I just couldn't do it.

A waste of time and money

I don't know who this guy is, but he needs to find another profession.
This book is written according to a formula. The characters actions are twisted to fit the formula, and make no sense in the context of the character.

I'm not opposed to formula fiction, but at least the dialogue has to be engaging, and the characters believable.

A bit disappointing. Difficulty I building and keeping tension and not a lot of depth on the storyline. Listened while I cleaned the house but not a 'long drive' kind of book.

Liam is an ex-detective who returns to his home town after his brother and his brothers wife are murdered in their home. Upon his arrival he and an old heartthrob, who has also come back to town for the funerals, start an investigation. The local sheriff enlists Liam's help to figure out who might be behind the murder of two separate couples in their homes, within a week of each other.

The murders were of such a gruesome nature that they are immediately thought to be of a personal nature. The only survivor is a little boy who right before he slips into a coma, says over and over that it was a monster. As they get further into the investigation, deep secrets are revealed and a conspiracy plot thickens. A good mystery with relatable characters, fast paced with good narration.

What would have made The River Is Dark better?

The writing!!! Good writing could have saved this book! While the story could have been engaging, the writing was just awful. Descriptions lacked interesting details and color and, instead, relied on trite, overused similes and metaphors. The dialogue was dreary, the humor not funny. I was so excited by the opening scene, but by mid-book began to tune out as I listened and never once felt the need to rewind. In the end (the last 10 minutes), I just marked it as finished. I paid less than a few bucks for it while it was on sale, but still feel like I paid too much. A pity, because I wanted to like it.

Anyone who has read a good mystery novel with a solid detective will know right off the bat how hollow these characters are. I mean this doesn’t even happen in Hollywood B movies anymore. (watch out there are spoilers ahead)
Give the detective a career ending conflict – check. Idolized love interest – check. A need to solve the case even though you have zero resources or understanding of the facts – check. Other cops who are territorial about their case – check. becoming the object of suspicion on the case and not being able to trust the police ( thouh I can’t see how the author can write that story line with a straight face)- check. An escape goat with a heart of gold – check. A villain / puppet master who is a “monster” with motives that can be put into a diabolical and incomprehensible final monologue before annihilating everyone- check. Solving the mystery and walking into the sunset with the family you never had – check.
This “detective” here is the equivalent of the teenager in the horror film that runs to hide into the shed with all the scythes and blades instead of getting into a running car and getting the heck out of there. Mr. Joe Hart, we are smart readers, we know sheriffs don’t recruit bereaved family members to solve their own sibling’s murders…who then get their love interests to help in the case and we know people who look like monsters aren’t necessarily killers.

Finally, A Great Book, I Loved every second of it!

This is one listen that will not leave You dissappointed,
Loved every minute of this story, I am always searching for a Great Detective story, , and this time I hit the jackpot!!

What a terrible book!

What disappointed you about The River Is Dark?

The plot, the characters, the dialog.

Nothing by this author.

What aspect of Eric G. Dove’s performance would you have changed?

He did his best.

If you could play editor, what scene or scenes would you have cut from The River Is Dark?

Oh, where to start? The plot was so much like many other books, damaged main character, lost romance with a woman who would probably have nothing to do with this man in real life, and the dialog was just sad. So much of what is said is out of character and follows no logical train of thought or reasoning. In addition, as if that wasn't enough, the writer made many errors in subject-verb agreement, having inanimate objects act as if alive, and making even body parts perform actions intended of the person as a whole. Editing was totally missing. Did anyone even proof this book? Lazy and sad. It reads like a first draft.

good, but not great. somewhat predictable. good for traveling, not too long. good narration.

Narration OK, story amateurish and not very interesting, cannot recommend this title and probably will not read another