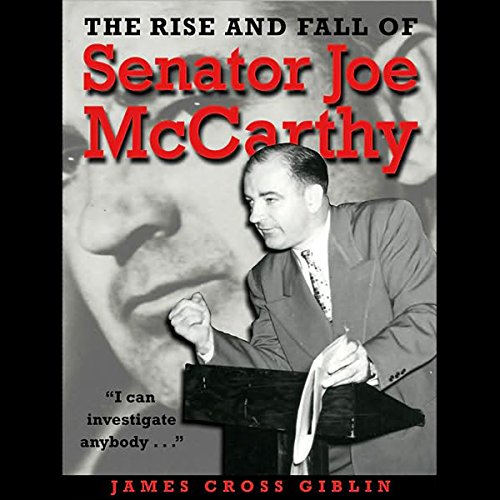 The Rise and Fall of Senator Joe McCarthy

The Rise and Fall of Senator Joe McCarthy

When Cold War tension was at its height, Joseph ("call me Joe") McCarthy conducted an anti-Communist crusade endorsed by millions of Americans, despite his unfair and unconstitutional methods.

Award-winning writer James Cross Giblin tells the story of a man whose priorities centered on power and media attention and who stopped at nothing to obtain both. The strengths and weaknesses of the man and the system that permitted his rise are explored in this authoritative, lucid biography, which sets McCarthy's life against a teeming backdrop of world affairs and struggles between military and political rivals at home.

The book is written simply and is not bad overall. The reading, however, is horrible. While mispronunciation of Wisconsin towns can be forgiven, the reader should have at least taken the time to find out how to pronounce some of the key individuals in the book. The reading of each letter in HUAC even after it is identified as an acronym is simply ignorance of both the definition of the word "acronym" and American history. There are many other examples of a near complete lack of preparation to read the book. I've never written a review for Audible before, but I just couldn't stop myself in this case. The author and publisher should be horrified by the reading of this book.

Good story - information wise -but I only struggled through her bizarre cadence and inflection because I paid for it, and wanted to know more about McCarthy after reading about Nixon.