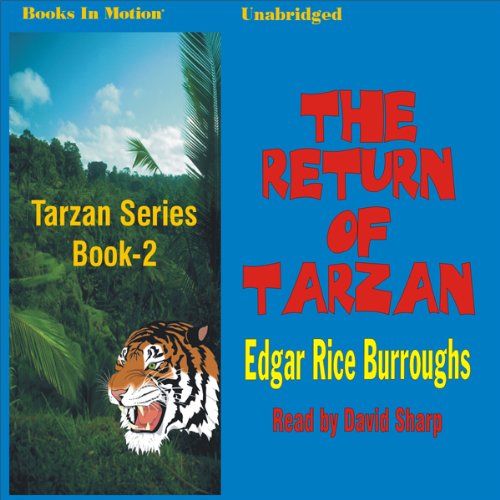 The Return of Tarzan

This is the second story in the Tarzan adventure novels. Tarzan has been in England where he has been learning about civilization, his heritage and how he fits into it all as Lord Greystoke. Fate thrusts Tarzan back into the primeval jungle and as he returns to it, his adventures begin with a shipboard altercation. Evil Nickolas Rokoff, the recipient of Tarzan's wrath, swears vengeance and puts a price on Tarzan's head. But Tarzan has greater concerns on his mind as he leaves modern civilization behind to discover a hidden ancient civilization.

What listeners say about The Return of Tarzan

There Are Much Better Versions Of This Audiobook!

I love Burroughs' Tarzan tales, but I had to stop listening to this audiobook before the end of the third chapter. The quality isn't what one expects from a professional audiobook. The narrator, for example, doesn't know how to breath away from the microphone when taking breaths between spoken passages, and the voices he assigns to the various characters are distracting from the narrative. Tarzan, for instance, comes off as effeminate and effete. (In my imagination, Tarzan has always sounded manly, like the actors who have played.on old-time radio, Saturday morning cartoons, the '60s TV show and the few films in which Tarzan is capable of proper speech.) Also, the vocal recording was apparently made with a microphone that "flattens out" his voice, causing his vocal tones to drone.

I don't mean to attack the novice narrator, but I do wish to warn potential buyers that this is a sub-standard product, and, for me, it made the audiobook an unpleasant experience.

I purchased another copy of this book, narrated by Robert Whitfield and recorded with clearly professional equipment, (and is the same price, I must note), and I am enjoying it immensely!

Again, this review holds no malice, personally, for the narrator (which is why I don't mention him by name), but I want to warn that one would be better off reading Edgar Rice Burroughs' fine novel for oneself than struggling to decrypt the author's intended effect from this particular narrator's performance.

Where does The Return of Tarzan rank among all the audiobooks you’ve listened to so far?

This book is in the top quarter at least...

It gives you the feel of excitment and antisapation for the next chapter...

There are pausses in the reading that makes you feel like there's a hick-up in the story...

It was easy to go away and return to the story.

Hope to hear all the Tarzan books...

Enjoyable continuation of the story.

If you could sum up The Return of Tarzan in three words, what would they be?

Equal to the first book in all ways.

What was one of the most memorable moments of The Return of Tarzan?

When Tarzan and Jane finally get together.

Have you listened to any of David Sharp’s other performances before? How does this one compare?

Yes, and he handles the story well.

It was hard to stop.

Would you consider the audio edition of The Return of Tarzan to be better than the print version?

i never read the print version but am hooked on the audible version. i love having the characters come to life

All the characters are complete . Tarzan becomes the standout and of course Jane is true blue. I really like the lack of sex and courseness that is all the new novels.

Have you listened to any of David Sharp’s other performances before? How does this one compare?

Yes and this one was equally good.

Nothing extreme. I was glad for the happy ending and the potential for more well told adventures.

Burroughs is a fantastic story-teller. That fact is evident in that a new generation loves Tarzan no matter how he is portrayed.I am definately a fan. I truely enjoy that a story can be told with complete characters while excluding the vulgar. When things are well written you don't need to tell every detail. He allows the reader to use their imagination. I wish more current writers would take note.