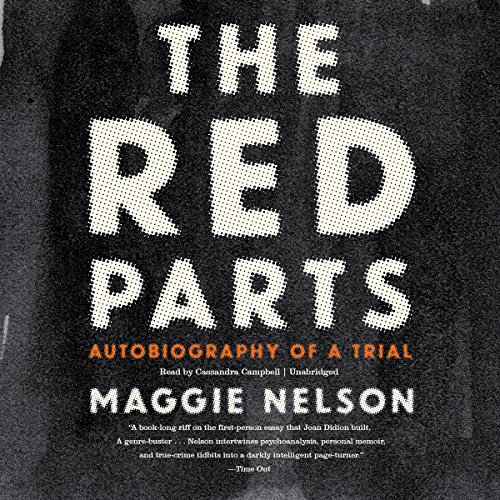 By: Maggie Nelson
Narrated by: Cassandra Campbell
Try for £0.00

A chilling genre-busting memoir by a major American essayist

Late in 2004, Maggie Nelson was looking forward to the publication of her book, Jane: A Murder, a narrative in verse about the life and death of her aunt, who had been murdered 35 years before. The case remained unsolved, but Jane was assumed to have been the victim of an infamous serial killer in Michigan in 1969.

Then, one November afternoon, Nelson received a call from her mother, who announced that the case had been reopened; a new suspect would be arrested and tried on the basis of a DNA match. Over the months that followed, Nelson found herself attending the trial with her mother and reflecting anew on the aura of dread and fear that hung over her family and childhood - an aura that derived not only from the terrible facts of her aunt's murder but also from her own complicated journey through sisterhood, daughterhood, and girlhood.

The Red Parts is a memoir, an account of a trial, and a provocative essay that interrogates the American obsession with violence and missing white women and that scrupulously explores the nature of grief, justice, and empathy.

What listeners say about The Red Parts

I've no idea what this could possibly add to my literary life. Badly-written, passionless performance, devoid of true feeling or purpose. A slog through irrelevance. Good luck.

Compelling, but missing something deeper

3.5 stars. I finished this book and am conflicted in how I feel about it. The writing itself is evocative and interesting, but sometimes feels overwrought. The subject matter (a sort of wandering exploration of how a murder impacts a family, the course of a trial, how certain events intersected with the author's life at the time) is obviously serious and compelling. Nelson's maternal aunt was murdered in the late 1960s (before Nelson was born), and her murder was thought to be committed by a serial killer. However, around 2004, a DNA match was found and a different person implicated. Nelson had finished a book of poetry that integrated her late aunt's own journal entries and Nelson's own impressions of her aunt and was closing in on her publication date when news of the reinvigorated investigation reached her. This book is largely Nelson's musings on her own life during this time period, memoir of some of her life growing up, and her impressions during and after the trial. I kept listening, and it was gripping, but at times I felt like a voyeur, at others Nelson's own recounting felt gratuitous (leaving the reader with the impression that she was focused on shocking or being particularly incisive, and not merely being honest). There are interesting insights throughout and some important points made (including our national appetite for shows depicting heinous crimes, and the disproportionate value we place on pretty, white deaths as opposed to the deaths of brown people), but these are in passing and only briefly discussed, leaving the reader to finish the book feeling like something was missing and an opportunity for a deeper book was left unrealized.

Ruined by the reader.

Maggie Nelson has a vibrant mind and is a good writer. Unfortunately the reader of this book is all smugness and distorts the voice which is everything in a work like this. Read the Argonauts. Or listen to Nelson read it herself. Not smug. Not arch. A great book, The Argonauts.

This author introduces herself as a poet, among other things. It certainly shows. I’m all for a well turned phrase, but this person’s prose is FLORID. While I do confess that I was unwilling to listen to in its entirety, I was additionally grossed out by how completely self centered she manages to be. I realize now, that’s what she meant by titling it as an autobiography. I imagine the book of poetry she wrote about her aunt is wonderful, she conveys emotion very vividly. But this is awfully Wuthering Heights-y when you’re expecting nonfiction. I wish there was a kind of transitional category for things that are technically true events, but stylized as much as gothic romance. I have no wish to invalidate her experience, I just wouldn’t have signed up to listen to them as recreation, had I known.

What a great read

I haven’t read a page turner like that in many covid months! Sad when it was finished.

Less about the trial or the victim than the author

This book was painfully narcissistic. I wish the author was less self-absorbed . Her goal seems to have been to be deep instead of conveying depth organically

I'm sorry for her pain, but this was pretty pathetic. I think it was very self-indulgent.