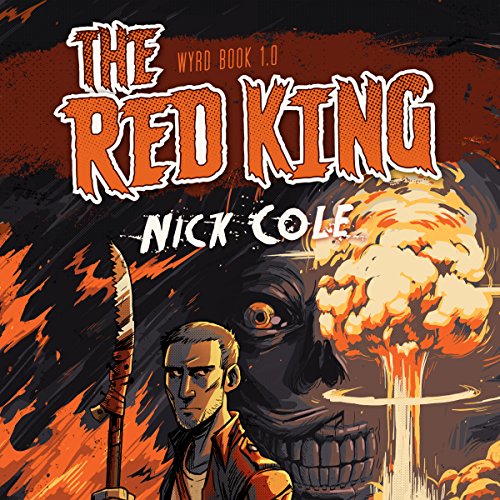 The end of the world is only the beginning as an odd band of survivors pull together to construct a modern-day castle amid the burning ruins of suburbia lost. As undead hordes and strange otherworldly monsters ravage what's left of civilization, things begin to go from worse to weird as each survivor's dark past unfolds, revealing that reality might be more than anyone ever thought, and that an ancient force from the outer dark has finally arrived to conquer. Stephen King's The Stand meets Lost in an epic confrontation between good and evil that spans history, time, and space.

What listeners say about The Red King

This being my first Audible audiobook, I was excited to hear the story in a voice outside of my own. The voice quality was superb in tone and inflection, helping bring Cole's written word to life. The Red King is an imaginative tale and the audiobook version resonated. I loved listening so much that I did so twice. I used credit to get this Audible selection for free/discounted and it was worth it. Having the story read aloud allowed me to relax and let my mind engage with the imagery, character and plot development.

If you could sum up The Red King in three words, what would they be?

Zombie apocalypse mystery. There's something strange behind the appearance of zombies, but this book only hints at it. Two of the point of view characters are deeply involved in it--one on the side of whoever is behind the infection and one who is trying to get to the bottom of it. At least, that's the idea I got. The rest of the point of view characters are simply trying to survive, to find safety and build a new life in the ruins of the old. But those hints of something human-controlled behind the horror adds an extra dimension to the story.

I liked Holiday. Flawed and immature though he is in the beginning, he changes more during the story than any other. He represents all of us, the every-man caught up in events far beyond his understanding. His struggles both to survive and to overcome his weaknesses makes for a compelling story.

Have you listened to any of Guy Williams’s other performances before? How does this one compare?

I have never listened to anything else Guy Williams has performed, but he does an excellent job with The Red King. I've been an Audible member since 2001, so have heard more than my share of narrators. Guy Williams handles everything extremely well. I cannot imagine anyone being disappointed with his performance.

Yes, but I don't want to include spoilers in this review. Let's just say it involved Holiday.

I really enjoyed this. Not your usual run of the mill zombie fiction. Gripping, well-written, and suspenseful. Reminded me of vintage Stephen King.

I've never really listened to an Audible book before. After listening to this one, I am hooked. The story is just excellent, and so compelling. The narration has full distinct character voices and so much tone and inflection. Buy this book. Just incredible.

Nicole is a versatile writer who has given us some great horror and yet it's apocalyptic. brilliant fun sad and hopeful

I loved this first book in the Apocalypse Wyrd series.I stayed up late reading this story & immediately purchased Dark Knight (book 2).I also purchased all the other authors books in The Wyrd series.This is an amazingly well written book with a unique storyline.The author creates a well developed world and characters I care about.I highly recommend this book to every fan of the post apocalyptic and zombie genres.The narrator does a good job and has a pleasant voice.

Fantastic Novel Brought to Life with the Narration

Cole has multiple story lines going on, from survivors, to special ops guys, to mysterious insiders. There's a lot of mystery going on in The Red King, such as the origin of the relentless zombies, and I'm looking forward to learning some answers.

Nick Cole never lets his readers down. He knows how to write action scenes, but more importantly, he knows how to draw readers in and have empathy for his characters. He is a fantastic stylist, and if you've never read The Wasteland Saga or Soda Pop Soldier, you need to put them on your reading list.

The narrator, Guy Williams, does a fantastic job with the story, bringing it to life in a way that may leave you looking over your shoulder, hoping against hope that the zombies aren’t coming after you!

What other book might you compare The Red King to and why?

There is no other, yet

Which character – as performed by Guy Williams – was your favorite?

When Holiday knows he screwed up for the last time and there is no fixing it this time.

A seemingly Romero-style zombie story with sci-fi/fantasy elements and military action. The story is well-paced and the characters well-written. Guy Williams' narrative style reminded me a bit of Rod Serling from The Twilight Zone which added to the atmosphere.
I can't wait for the sequel. Honestly, this would make an excellent TV show or miniseries.

As Unexpected as Ever

Many great books are done a disservice by poor narration, but not this one. As always, Nick Cole immerses me in his characters and this audio version made that even more real . And, like most of Cole's stories, it's really hard to describe. Let's just say, expect the unexpected.

Yes indeed. I usually listen to a book while at the gym but this was one I couldn't wait until I got up the will go back and torture myself. So I did myself a favor and just listened to this one without much interruption.